It's been an interesting year birdwatching in Hilly Fields. I've made 44 such visits and seen 21 different species as follows:

Christmas in the park

What a beautiful morning!

However, the northerly breeze didn't encourage loitering and I soon returned home for Christmas dinner.

For only the second time this year, there were eleven bird species in the park when I visited between 11:30 and Noon. The last time I found that many was 26th January 2008.

I must also mention that on Friday 14th December I watched a Sparrowhawk wheeling around over Hilly Fields Park.
Posted by Keith64 at 15:36 No comments: Links to this post

Recently Glendale have been busy in Hilly Fields putting up bird nesting boxes. Late Autumn or early Winter is the best time of year to do this as the boxes will be nicely weathered by the time birds are looking for nest sites in the spring.

They've now installed 11 bird nest boxes in the park, but where are they? Can you spot them all?

Here are photos of three I spotted today when I went to fill the bird feeder. 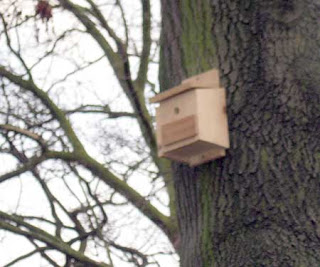 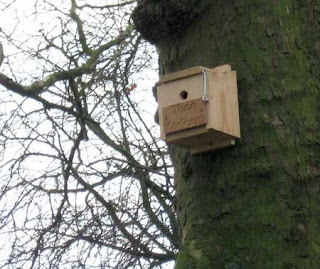 If you install a bird box in your garden, try to put it where the hot afternoon sun won't find it, such as a shady wall or one that faces north-east.
Posted by Keith64 at 23:04 No comments: Links to this post

Most of the time when I would’ve liked to wander through the park I was busily defending my four birdfeeders against a family of grey squirrels, and losing.

My table feeder is squirrel proof as is the table feeder which is the same kind as in Hilly Fields’ quiet garden. The peanut feeder and fat-ball feeder are another matter and require constant attention and frequent adjustment of whatever defences I’m able to provide.

The RSPB recommend chilli powder but the largest squirrel appears to be immune to its affects. Success came after I rigged up a large baffle. I thought that was the end of it until yesterday, because someone has found my store of fat-balls, got the lid off and taken at least two!
Posted by Keith64 at 23:56 No comments: Links to this post