A Tit Without A Tail

I had seen it twice in the third week of May. Up in the hawthorns on Eastern Road - a very small bird looking from below like a ball of pale fluff, always in the company of a Long-tailed Tit and moving rapidly between branches and trees. It kept making a high "tseeping" sound and I had thought: Goldcrest? Very recent fledgling of some sort? At times, it hovered between branches fluttering its wings as if to keep airborne, but usually it had no problem flying fast or in a reasonably straight line.Then, on 22 May while doing the monthly bird survey with Sue, we both saw it and  reached the conclusion that what we were looking at - from the visible head markings and general behaviour - could only be a Long-tailed Tit without a tail.

Back home, a quick surf through Google proved that tail-less tits, though not common, are seen from time to time. The lack of a tail is usually the result of an accident or a predator attack. It doesn't seem to affect their ability to forage and frolic (like a "manic pom-pom" is how one tail-less tit is described) and the tail normally grows back after about four weeks. I haven't been able to photograph the Eastern Rd pom-pom, but here's a pic from the web::

Long-tailed Tits are nesting in the densest bramble scrub you could find on Eastern Rd where their chicks should be safe until fledged. This is good news as they are one of five key species among Hilly Fields regulars which re-assure me that the park is still providing a good diverse habitat. The other four are: Blackcap, Great Spotted Woodpecker, Jay and Mistle Thrush. Yes, I know you could add the "at risk" House Sparrow, the Dunnock, the Greenfinch (not seen often and in decline nationally), but I'll stick with my "big five" for now.

Sue and I saw four of those five key species during our May survey, the only absentee being the Mistle Thrush. There were plenty of birds singing, but the foliage is back on the trees and seeing the smaller birds is getting harder again. Our list for that day (of birds seen or heard) is as follows: Blackbird (6), Blackcap (1), Blue Tit (4), Crow (3), Chaffinch (1), Chiffchaff (1), Collared Dove (2 - an unusual sighting on Hilly Fields), Dunnock (1 - singing in the Vicars Hill border), Feral Pigeon, Goldfinch (3+), Great Spotted Woodpecker (1), Great Tit (4), House Sparrow (2), Jay (1), Long-tailed Tit (3), Magpie (2), Ring-necked Parakeet (1), Robin (5), Starling (6), Swift (2 - soaring overhead), Woodpigeon (3) and Wren (5+).  22 species - one of our best results. The Chiffchaff is only the second we've heard on Hilly Fields since their arrival in the UK in late March/April.  And it occurred to me that the Jay would be able to hide itself better in thick woodland or scrub without that bright blue wing patch which gave it away this time. Here's a photo of one I took a few days earlier on the open edge of Hilly Fields wood: 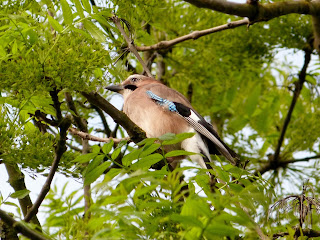 Around the park in general, spring has sprung with a vengeance after the extended midwinter cold. All of the trees are in leaf, the horse chestnuts have their creamy-white flowers, the May blossom has appeared on the hawthorns, there are daisies and bulbous buttercups and even the occasional bee or butterfly. And one particular plant - as you can't fail to have noticed if you've been there recently - is romping away: 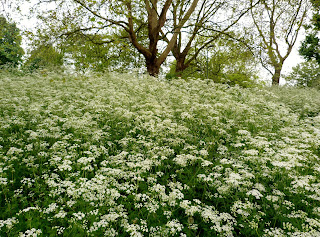 Yes, you can hardly see the trees for the cow parsley.

Sue and I did our monthly bird survey on 30th April - a warm sunny morning with just a slight chill here and there to remind us of the cold winter not long left behind. Most of the trees were in leaf, the cow parsley was beginning to flower and the birds were in full springtime song. Blackbirds, Robins, Wrens, Great Tits and Chaffinches could be heard abundantly around the park and we also saw and heard at least three male Blackcaps. There were brief glimpses of the Jay, Great Spotted Woodpecker and Goldcrest and we spent some time trying to get a clear view of a silent warbler that was flitting about high in the branches of a leafy tree. In the end, we concluded that it was probably a Chiffchaff. The only regulars that were missing were Goldfinches and Mistle Thrushes though they have both been seen and heard since.

Blackcaps and Chiffchaffs are the only warblers we seem to get on Hilly Fields and only the Blackcap stays around for the summer. Those we saw would be spring migrants, recent arrivals and will already be in the throes of nest building and breeding. The wintering Blackcaps will by now have returned to central Europe. Blackcaps are just a tiny bit smaller than House Sparrows and it is only the male that has a black cap; the female's being a sweet chestnut brown. Often, though, the easiest way to spot them in the bush is by the white downy breast. You will hear them singing at this time of year though not as often as the songbirds I've mentioned above. Their song is very attractive, starting in a scratchy stuttering manner and becoming more "fluting" towards the end. Here's an example:


Our final tally was 19 species: 8 Blackbirds, 3+ Blackcaps, 3+ Blue Tits, Chaffinch, 5 Feral Pigeons, Great Spotted Woodpecker, only 1 House Sparrow (unusual), 2 Long-tailed Tits, Ring-necked Parakeet, 4 Starlings, 3+ Wrens, 2+ Carrion Crows, Chiffchaff, Goldcrest, 4+ Great Tits, Jay, Magpie, 6+ Robins, 3+ Woodpigeons. This is one of the few months in which the Feral (or 'London') Pigeon has outnumbered the plumper Wood Pigeon (the one with the white collar). The House Sparrows must have been out and about. We have now recorded 41 different bird species at Hilly Fields since the Bird Champion Project began in 2007 and I will publish the full list in our next post or you can read our report on the Lewisham Nature Conservation website here. The most recent new sighting was a Lesser Black-backed Gull seen here in splendid isolation near the cricket pitch on 20th April: 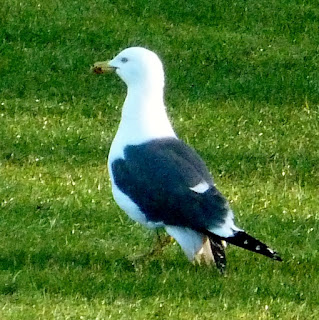