The good news is that the Lewisham Rivers and People Project is coming to Hilly Fields. "The Hill Is Alive! Birds, Beasts and Wildflowers in an Urban Park" is the title of a walk taking place on Thursday 28 March starting at 10.30. Meet on the corner of Adelaide Avenue and Eastern Road. The walk will be led by Nick Bertrand, the legendary Deptford botanist, which means that expert and entertaining commentary about flowers and trees in the park is guaranteed. There will also be input on bird life from the Bird Champions group. We might see a Blackcap like the one in this photo by Keith Ward taken in his back garden which adjoins Hilly Fields: 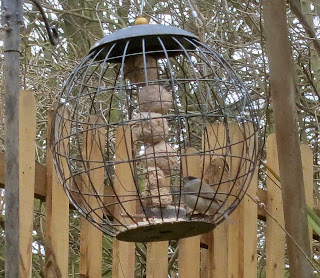 Or the Great Spotted Woodpecker (below) 'spotted' by Mike Keogh near the lower Vicars Hill entrance on 5 March: 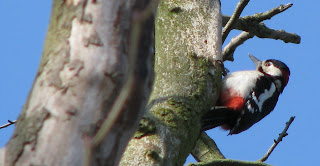 Not sure what "beasts" we'll encounter other than dogs and squirrels, but you never know. Perhaps some bees and butterflies will have appeared by then. I saw my first bumble bee of 2013 last week in Kelsey Park, Bromley.

The bad news is that these are the last months of the Rivers and People Project. After holding regular nature events in Lewisham since April 2010, funding is running out and the project comes to an end in July. Before then, however,there is a packed programme of walks, wades, river dippings - even an introduction to "Pressing and Mounting Wildflowers". The next event is this Saturday (23 March) at Oxleas Wood, starting at 2pm - "a walk around this magnificent ancient woodland". See the Lewisham Nature Conservation website for more details - http://natureconservationlewisham.co.uk/rivers-people/ - or take a look at the programme pinned up outside the cafe.

The sad news is that our ex-parkie, Keith Seabrook, passed away on 28 February after a long illness. Many park users will remember Keith who can be seen in the background of this photo from our RSPB Big Birdwatch event in January 2012. 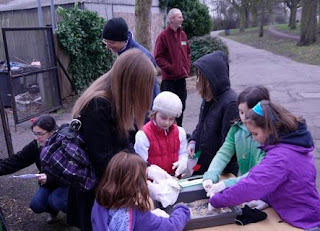 Always friendly and helpful, Keith kept the park in good order and was very supportive of both the Friends of Hilly Fields and the Bird Champion project. He would often fill up the bird feeder for us if we couldn't get to it and then complain when the parakeets descended on it! The funeral is on Monday March 25 at 9.30 am at Hither Green Crematorium.
Posted by Tom at 23:44 1 comment:

26 February: such a cold overcast day that I approached Hilly Fields with low expectations, only to hear a Dunnock singing in the Vicars Hill border as soon as I got there. Joined by Sue and Tony, we started off on our usual path alongside the Veda Road back gardens with Great Tits calling almost non-stop from the trees and bushes. Around the corner, a pair of Jays were screeching to each other from opposite ends of the little wood. Shortly afterwards, I managed inadvertently to flush one out of its hiding place and saw it land on the other side of Eastern Road before flying back over the wood to find its mate. The trees along the road also revealed a pair of Greenfinches, a brief sighting of a Mistle Thrush, a Magpie evidently building a nest there and a flurry of Goldfinches twittering around the high branches before shooting off elsewhere. So much activity! It seemed as if the birds were saying: "we have business to conduct whatever the weather". Greenfinches, by the way, are known for the so-called "wheezing" call they make when trying to attract a mate, although it always sounds like a sneer to me. Have a listen to this RSPB recording...
http://www.rspb.org.uk/wildlife/birdguide/name/g/greenfinch/index.aspx

A few minutes later, we saw two Mistle Thrushes driven out of a tree beyond the playground by a group of noisy Crows. On the north field, another tree held about 30 Starlings going through their repertoire of sound effects while a flock of 30+ gulls was spread around the cricket pitch and along the slope. The great majority were Common Gulls (Sue counted 30) which has been the trend since the start of the year, a reversal of the usual Black-headed Gull dominance and unusual for an Inner London park. After that, it was so cold and drizzly on the high ground that we headed quickly for the Cliffview Road border where there were rather more House Sparrows than usual - up to 10, I would say (as reported by "Hilly" in the comments on the previous post) - and then back uphill to the sanctuary of the cafe. A good morning, though, despite the elements with 18 species seen or heard including 12 Wood Pigeons and small numbers of Robins, Blue Tits, Blackbirds, Parakeets and a Chaffinch in addition to those birds already mentioned.

The other news is that a few days before our survey, Sue saw a pair of Collared Doves on Hilly Fields which is another "first" for the site, at least during the time that we've been recording. These birds have a softer look about them than the Feral Pigeon which they resemble from a distance, as well as a black ring around the neck. Although numbers in London have increased considerably since 1995, they still seem fairly uncommon in the Inner Boroughs. You'll know if you've heard one though. In fact, you'll wish you hadn't. Their insistent three note cooing makes the Wood Pigeon sound almost lyrical.