Another Sunday in January (29th), another Big Birdwatch on Hilly Fields. Last year, it rained depressingly throughout the event and our final count was low. This year did not look promising. It was dry when Sue and I started leading the walks, but the gentle rain from heaven was soon pitter-pattering on our heads. After a while though, it stopped and after another while, the sun came out. Best of all, the birds came out all the way through and by the end of the event, we'd chalked up 25 species - almost a record - on our famous blackboard. 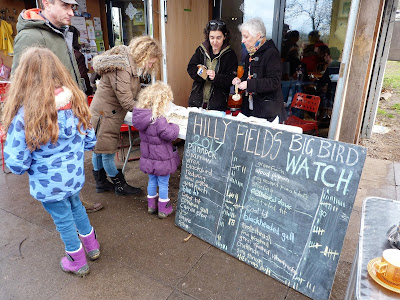 Joint leaders were the Common Gull and Starling - both with counts of 30. In second place, a flock of approx 13 Goldfinches and in joint third place - the Black-headed Gull and the humble Woodpigeon with counts of 10 each. Highlights included sightings of four different species of thrush - a Mistle Thrush camouflaged almost to invisibility against a backdrop of dead leaves, brief glimpses of a Song Thrush and Redwing (winter migrant from Scandinavia) and 9 Blackbirds which are also fully paid-up members of the Thrush family. Other highlights included clear views of a female Great Spotted Woodpecker chipping at tree trunks in two different locations, a lively little flock of 5 Long-tailed Tits, two Dunnocks, a Greenfinch and a Herring Gull on the south field grassland.

The remaining birds seen were 9 Great Tits, 7 each of Blue Tit, Feral Pigeon, House Sparrow, Ring-necked Parakeet and Robin, 3 each of Crow and Magpie, 2 Wrens and 1 each of Chaffinch and Collared Dove. Meanwhile, outside the cafe, Rachel and her helpers were handing out information and showing a total of 18 children how to make seed balls and bird feeders, hopefully sowing the seeds of bird awareness amongst the young.

Thanks to everyone who came along and helped, particularly Conrad Ellam whose bird knowledge and keen eyesight were particularly useful. Thanks also to Lawrence for his support, to Sue and Judith, to Rachel, Phil, Sally and the Friends of Hilly Fields, to Lee the parkie and to our community-minded cafe. Dawn chorus walk next at the end of March!