Silence of the Birds

We were greeted by silence at the lower Vicars Hill Gate on 27 July, at least as far as birdsong is concerned. Traffic was light on the road and, for a minute or two, all that could be heard was the sound of raindrops plopping down from leaf to leaf in the plane trees. It was evident that we had reached the end of the breeding period and entered that quiet season when most birds rest and moult. We began our circuit of the park and although we had a few brief sightings and soundings, things remained uneventful until we reached the upper part of Eastern Road. 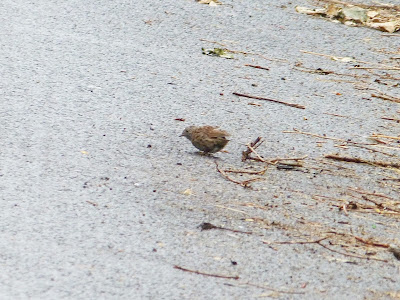 Here we saw a small sparrow-like bird scavenging on the roadway which had clearly lost its tail. From its grey head and thin bill, we realised it was a Dunnock - a bird once better known as the 'Hedge Sparrow' although the two species are not related. I would guess that it was a juvenile which had had a close encounter with a predator - a bigger bird or possibly even a squirrel or cat. No worries - it survived. And as a bird's tail is composed entirely of feathers, it will soon grow back again. We see or hear Dunnocks often on Hilly Fields but rarely out in the open like this. They are skulking birds, usually glimpsed in the undergrowth where, unexpectedly perhaps in view of their drab appearance, they lead adventurous sex lives which 'might make Russell Brand blush.'

Also scavenging on this stretch of road were a family of 4 Blackbirds, presumably the same adults that we saw last year but with different juveniles.  Blackbirds are scrub nesters, ie. they favour bushes and small trees. Upper Eastern Road with its thick vegetation, bramble bushes and hawthorns is ideal habitat for them and, with all the berries and orchard fruit nearby, is almost like nesting in a larder. We also caught a brief glimpse of a Song Thrush further up the road which is only our second sighting this year.

Elsewhere, Wrens sang occasionally and we heard a few wistful snatches of Robin and Blackbird song and both saw and heard a pair of Goldfinches. We may have heard a brief snatch of Blackcap song at one point but were not sure enough to record it. The final list included 7 Woodpigeons, 2 each of Blue Tit, Crow and Magpie and singles of Great Tit, House Sparrow and Parakeet in addition to the birds already mentioned. A total of 13 species in all - a fair drop from last month, but identical to last year's July figure and only one less than July 2014.
Posted by Tom at 10:28 No comments: Links to this post