Wrens, Robins, Goldfinches and Great Tits were all singing or calling at the lower Vicar's Hill entrance when we arrived for our monthly survey on 28 April. Much the same as last month except that as we moved deeper into the park, we heard two new songs. Every spring, Hilly Fields welcomes two migrant warblers from North Africa: the Blackcap and the Chiffchaff who fly thousands of miles to breed in our cooler climate. The Blackcap's song - which we heard in brief bursts on upper Eastern Road - is usually described as 'fluting' but it has a scratchy undertow and an insistent quality. It's hard to find a good film recording, but the clip below does at least show the simple beauty of this bird with its silver-grey breast and black 'cap'. Not to be outdone, the female has a lovely chestnut brown cap.


In this location, we saw a Dunnock singing, heard a Greenfinch sneering and watched two Blackbirds building a nest. A Wren was pouring out its song from a bare tree, its stumpy tail upturned as usual. On the south slope, Starlings were digging for invertebrates in the grassland - their glossy plumage and bright yellow bills a sign that they too are enjoying the breeding season. The staccato song of the Chiffchaff was heard briefly in the bothy area where we also heard very clearly the laughing call of the Green Woodpecker. This bird has either become a regular visitor or is nesting in or around the park. 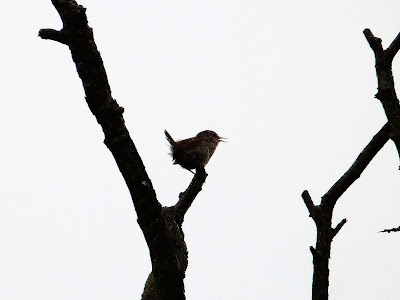 By the end of our survey, we had seen or heard 23 species - a very healthy total. By far the most numerous bird was the Starling with a flock of 20, followed by 9 Robins, 7 Woodpigeon, 6 Wrens, 4 each of Goldfinch and Great Tit, 3 each of Blackbird and Parakeet, 2 each of Blue Tit, Crow, Feral Pigeon, House Sparrow, Magpie and Mistle Thrush and 1 each of Blackcap, Chaffinch, Chiffchaff, Collared Dove, Dunnock, Great Spotted Woodpecker, Greenfinch, Green Woodpecker  and Song Thrush. 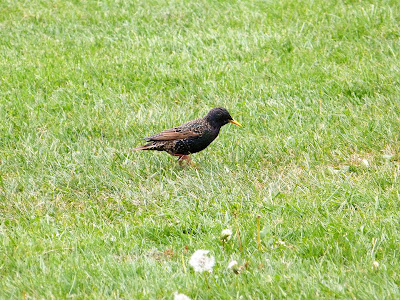 Meanwhile it's a 'white-out' in certain parts of the park as cow parsley blooms and the white blossom appears on the orchard trees, on the hawthorns and on the candle like flower spikes of the horse chestnut. The magical month of May is upon us!