Our latest survey (on 28 June) was notable for the range of birds seen or heard - 20 species in total. Numbers of each species were not high but the smaller birds are difficult to see at this time of year when the green leaves of summer provide plenty of cover. And the recent weather pattern of alternating rain and sunshine has led to lush growth everywhere. The bird most frequently heard around the park (and seen in the trees on upper Eastern Road) was the Wren which is one of Britain's smallest and most common birds. Its distinguishing features are the stumpy cocked tail and the dark and pale bars along its sides. Its song is a bold and strong cascade of notes ending in a trill. Both tail and song suggest a spirited bird determined to protect its territory and survive despite its small size. 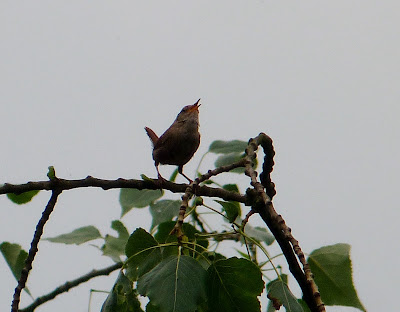 After missing them in May, it was good to record our two migrant warblers again. We heard at least one, probably two Blackcaps singing, and both saw and heard the Chiffchaff. For the last few years, these small birds have been arriving every spring from the Med and North Africa to breed in our cool woodland shade. We also saw a Greenfinch perched high in a tree on Upper Eastern Road,  Apart from its green plumage (with yellow patches on the wings), this bird can be identified by its chunky bill and its sneering call (often described as 'wheezing' in bird books) which somehow seems aimed at us humans striving feebly below. This picture was taken on a winter's day when the sun painted it yellow. 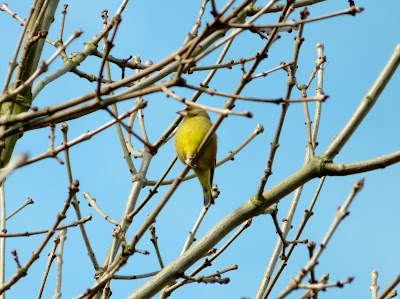 The full roll call was as follows: Blackbird 4, Blackcap 1+, Blue Tit 2, Chaffinch 2, Chiffchaff 1, Coal Tit 1, Crow 4, Dunnock 1, Goldfinch 1, Great Spotted Woodpecker 1, Great Tit 1, Greenfinch 1, House Sparrow 4, Magpie 2, Mistle Thrush 1, Ring-necked Parakeet 1, Robin 2, Starling 3, Woodpigeon 2, Wren 9. It is worth noting that we saw no Swifts in the sky above and although I saw 6 one evening a few weeks ago over my garden, their numbers sadly are on the decline. The Coal Tit was heard but not seen. It is an uncommon visitor to Hilly Fields and to our neighbouring green spaces at Ladywell Fields and the Brockley and Ladywell cemeteries. Smaller and less colourful than the Great Tit, it can be identified by the white stripe on the back of its head.