We've all seen and heard the pesky parakeets that swoop and screech over our green spaces and gardens. With their bright green plumage and long tails, they are an exotic and perhaps attractive sight at first, even if their squawking and squealing takes some getting used to. But they are an invasive species and not generally regarded as a welcome addition to our natural environment. 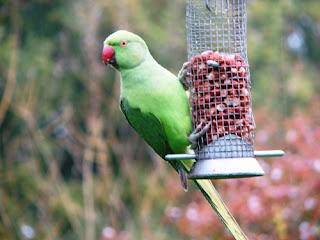 In fact, such has been the concern about the growing numbers of these birds and their potential impact on other birds and on agriculture that Imperial College has launched Project Parakeet which is now in its third year and aims to assess:

To estimate numbers and growth, the Project holds quarterly counts at several well-known roosts in the London area. One of the biggest roosts is at Hither Green cemetery where several thousand parakeets from all over the SE London area spend the night. By all accounts, the arrival at dusk of so many of these birds is a quite amazing spectacle. The next count is being held on the evening of 1 April and volunteers are being called for to assist with the count at Hither Green. Volunteers are asked to arrive at 7.00 pm and it is expected that the count will end at 8.15 pm approx. 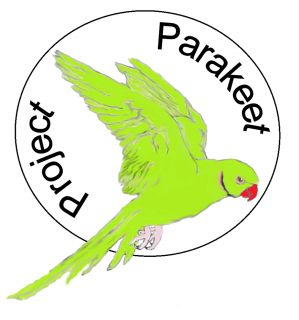 Incidentally, Project Parakeet uses the name Rose-Ringed Parakeet for these birds (as does Wikipedia). The RSPB, the BTO and most birders I know call them Ring-Necked Parakeets. But what's in a name? They're the same noisy beast.


Our February survey took place on a leap day (29th) though I'm sure to the birds it was just another morning and a mild one at that. A total of 22 species were seen or heard which is a good tally and includes a Dunnock heard singing in the trees bordering the south-east field, a fine pair of Mistle Thrushes in the wood and, for the first time this winter, a Redwing in the trees on Eastern Road. Yes - just one. For some reason, Redwings have given Hilly Fields a miss this year despite being seen in such nearby places as Brockley Cemetery, Brookmill Park, Ladywell Fields and Greenwich Park (450+ recorded there on 10 February).

What we do get on Hilly Fields are Common Gulls which are not always found in other local gull hotspots. Close examination of the flock on the north field around the cricket pitch revealed 10 Common and 28 Black-headed Gulls - a few of the latter actually sporting the "black head" (strictly speaking, dark brown) which develops in the spring and summer. 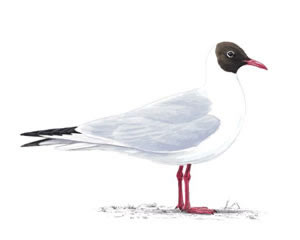 There were fewer Starlings than on Big Birdwatch day (30 compared to 80 then) and fewer Goldfinches (4 compared to the usual 16+). However, a healthy number of Chaffinches were around and a trio of Greenfinches were sitting in the Eastern Rd trees which they often frequent. Above the path that borders the east field, a Magpie was diligently building a new nest - a reminder that the main breeding season is almost upon us. 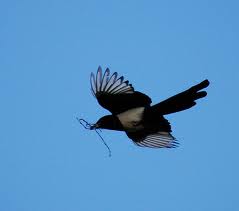 On the birds of prey front, Sue spotted a male Kestrel on 7 February perched on a ledge on the western side of Prendergast School, while Lawrence reports the following: "Today 23rd Feb 2012 we saw a pair of Sparrowhawks perch in a sycamore tree at the end of our garden between Wickham Rd and Breakspears, they sat apart for a while until a Jay attacked one and this revealed the other in the tree behind as they went for the Jay, didn't get it. Fantastic!" The Sparrowhawks may well be part of the family that nested in Brockley Cemetery last year. It's good to know that they're still around, though perhaps not so good for other birds!