This year's Dawn Chorus walk will take place on Tuesday 31 March. We will meet at 6 am outside the cafe on Hilly Fields. As in previous years, we will walk around both Hilly Fields and the Brockley and Ladywell cemeteries. If you wish to join us just for the cemeteries, then please be at the side gates on Brockley Grove just past the bus shelter at 7 am. The event will finish at 8 am.

What will we hear and see? Nature is unpredictable, but it can almost be guaranteed that we'll hear Robins, Blackbirds and Wrens singing and Great Tits and Blue Tits calling. We may hear Dunnocks, Chaffinches and a Chiffchaff too. We may hear a Song Thrush and/or a Mistle Thrush singing. We may hear Goldfinches twittering and Greenfinches 'sneering'. We should see quite a number of these birds too. We may also see a Great Woodpecker or hear it drumming. We may see a Green Woodpecker or hear its laughing call as we did last year in the cemeteries. 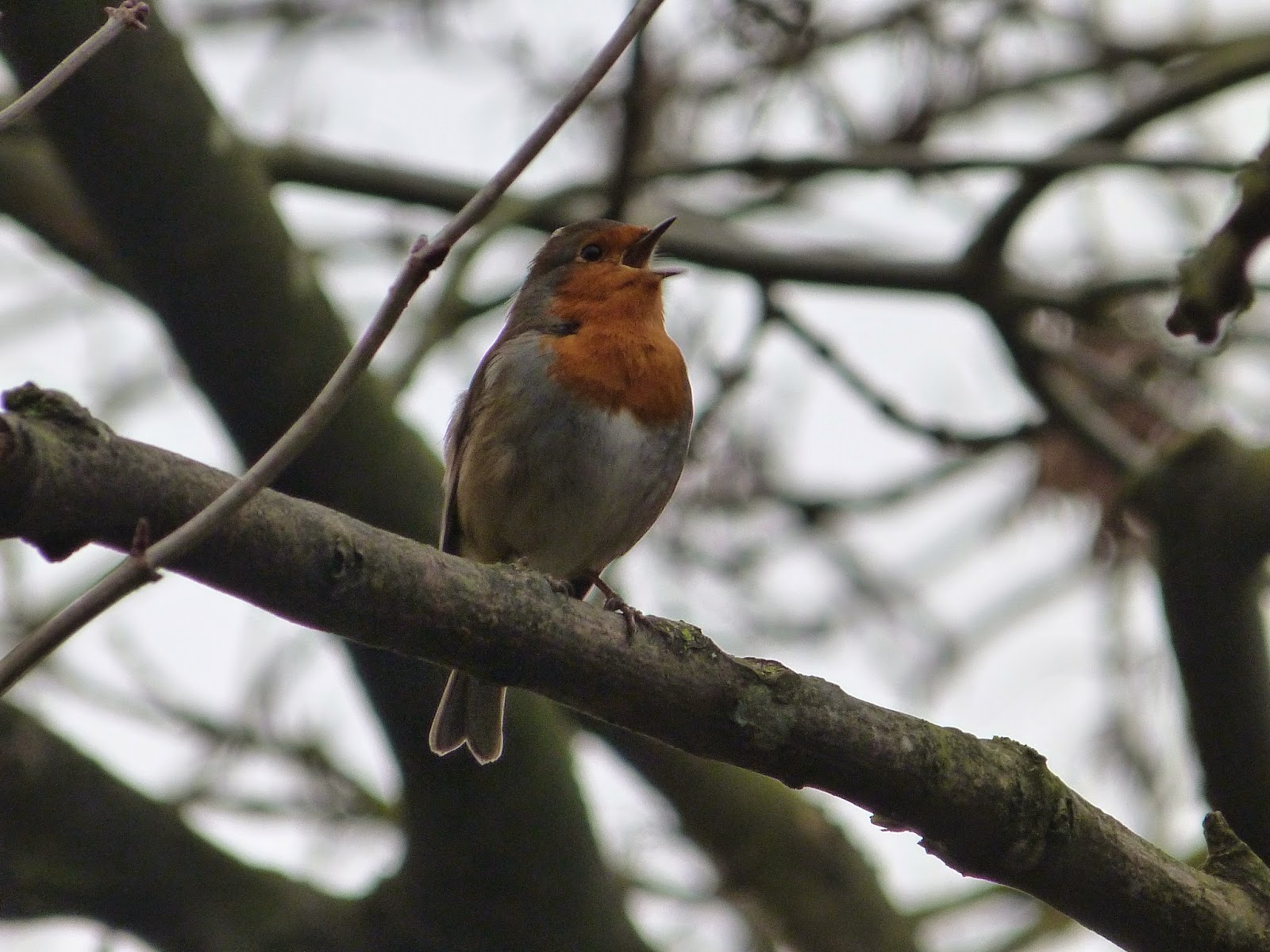 Whatever we see or hear, it should be a good experience. Bring binoculars if you can, but if you can't - don't worry. Be an early bird and come along. 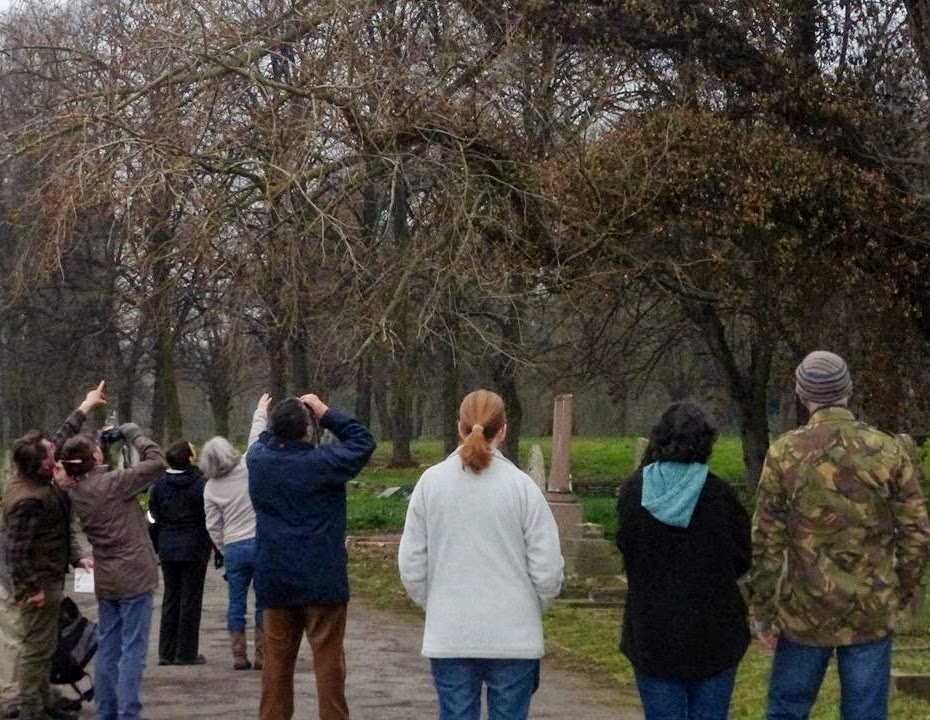 Posted by Tom at 20:51 No comments: Links to this post

A Bit of Parakeet Cheek

Our monthly survey on 25 February got off to a great start when we spotted a woodpecker in trees along the Veda Road border. Yes, folks, it was a Great Spotted Woodpecker - a female as it lacked the male's red patch behind the head. 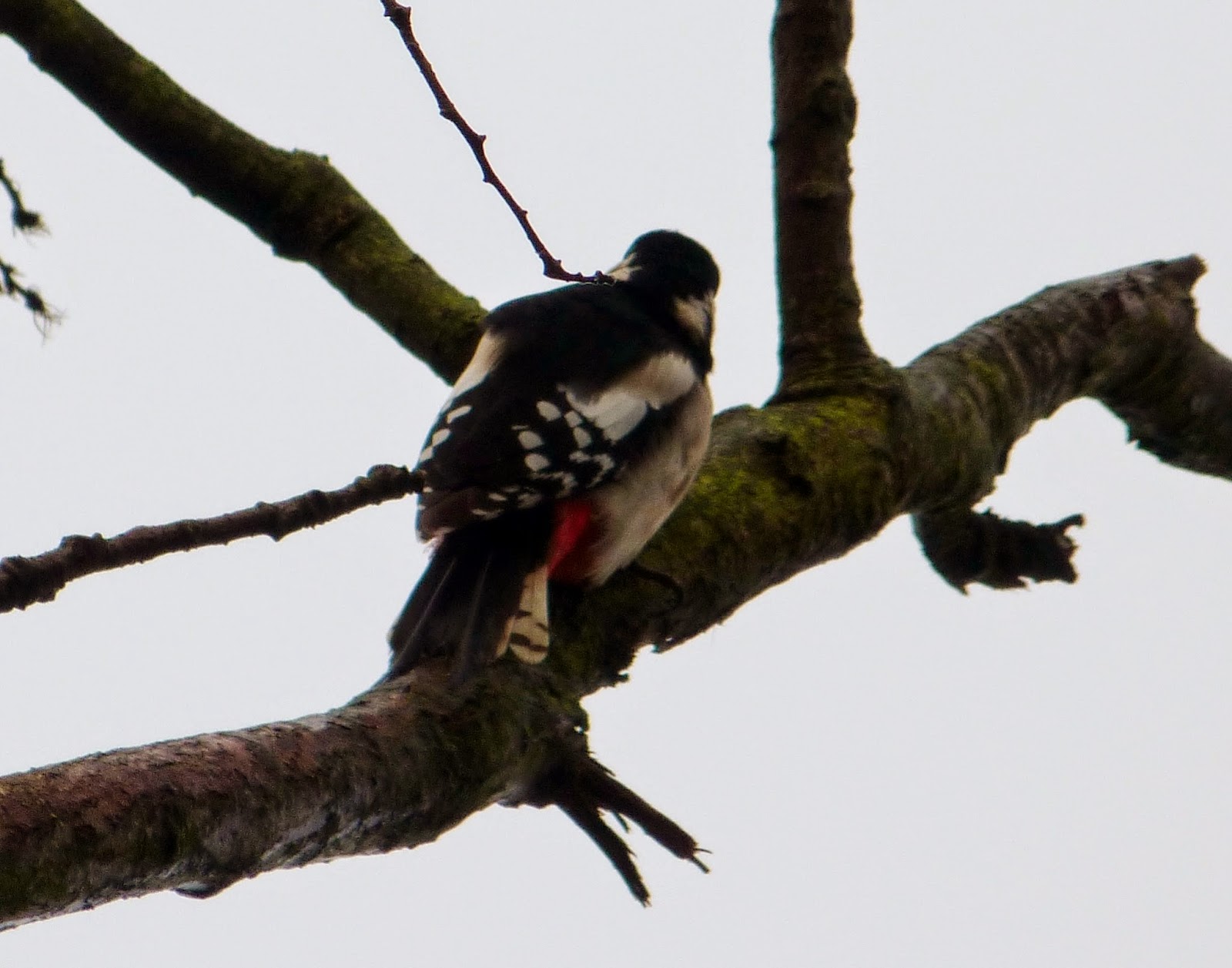 Later, we discovered that last year's woodpecker nest (see here) has been commandeered by a pair of parakeets who start breeding earlier than the other birds. If you walk due south from the front of the cafe with the tennis courts on your right, there is a traffic barrier and to the left of that an ash tree. The nest is in a hole (which the parakeets have widened a little) about 20 feet up the tree. To the best of our knowledge, we have only one pair of woodpeckers in the park and they generally choose a different site every year so war is unlikely to break out. But it's a bit of parakeet cheek. I bet they never asked... 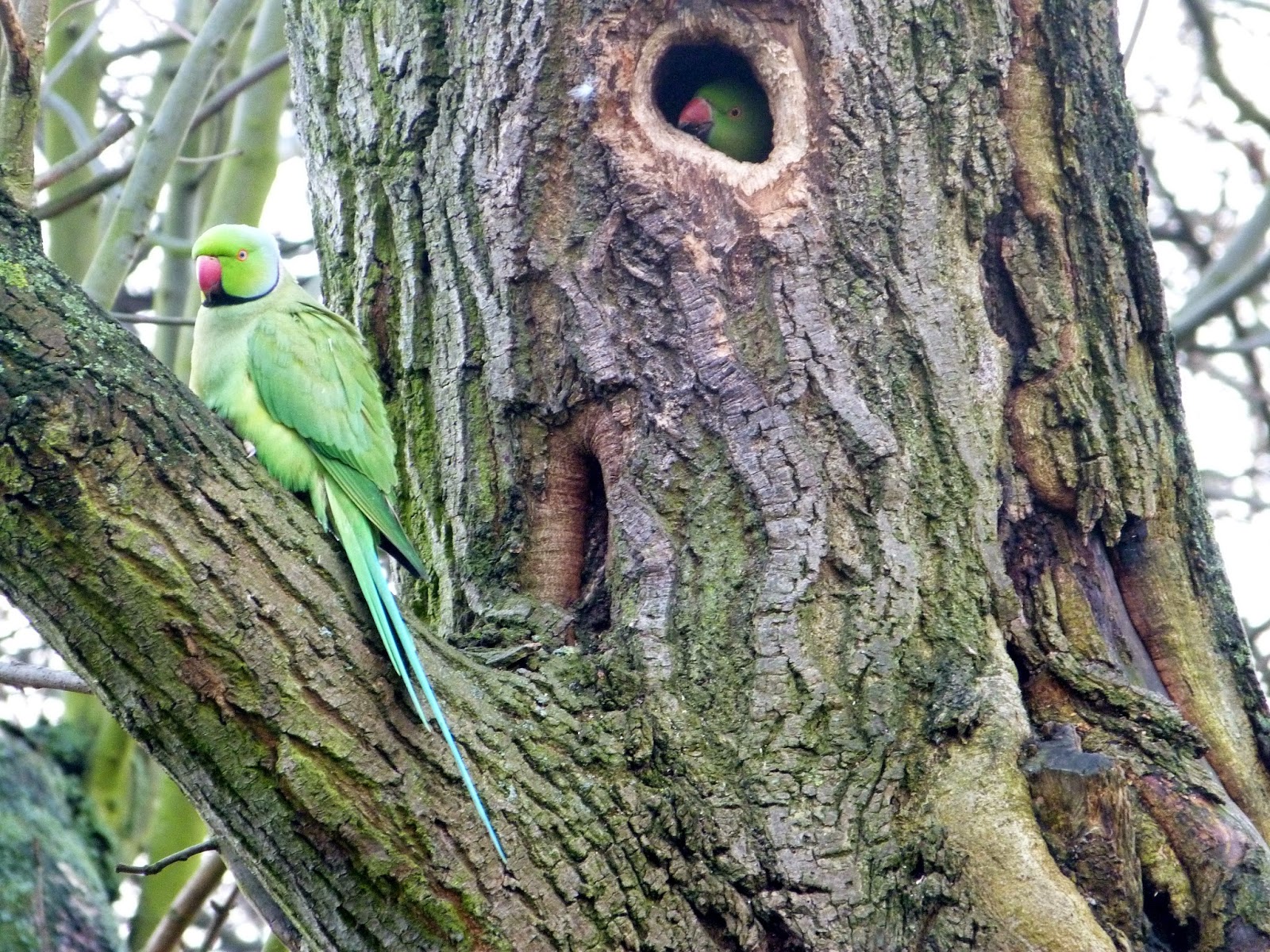 The small birds were all very active as we would expect given it's their mating season. Great Tits were the most vocal, but Robins and Wrens were also singing loudly. While most of the tits and finches were flitting around, a Greenfinch sat still for quite some time in the top branches of a tree on upper Eastern Road, evidently enjoying the sunshine. 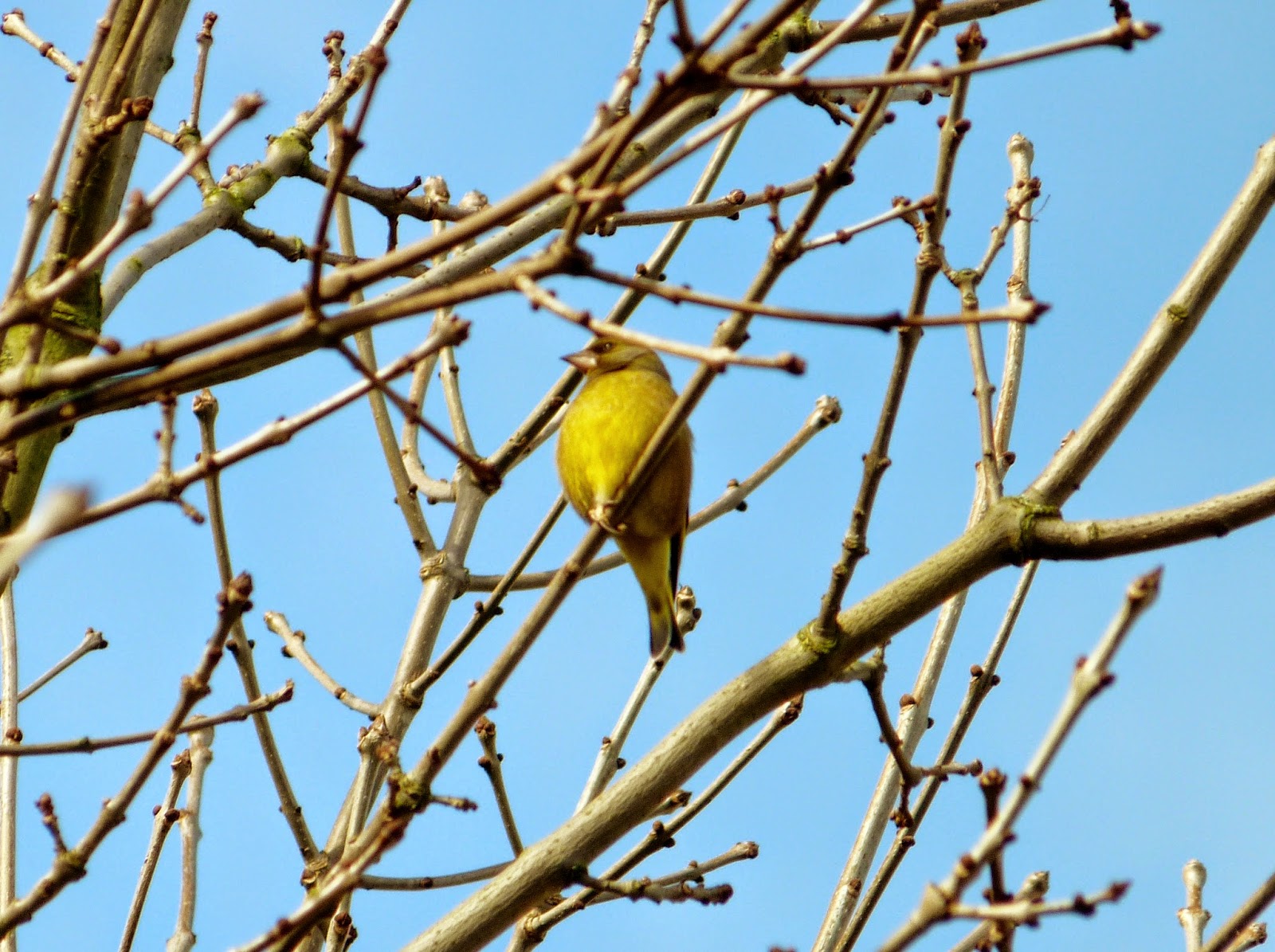 Counting the gulls on the cricket field was difficult as they came and went, but we estimate 50 Common Gull (yellow bill and legs) and 8 Black-headed Gull (Red bill and legs). Hilly Fields is one of the few sites in Lewisham where Common Gulls congregate in such numbers. Sue saw a pair of Collared Doves which is unusual in the park. And just when we thought it was all over and were refreshing ourselves outside the cafe, we saw a pair of Redwings in the trees next to the basketball court. These are thrushes which winter here from Scandinavia and have a patch of red under the wing, hence the name. 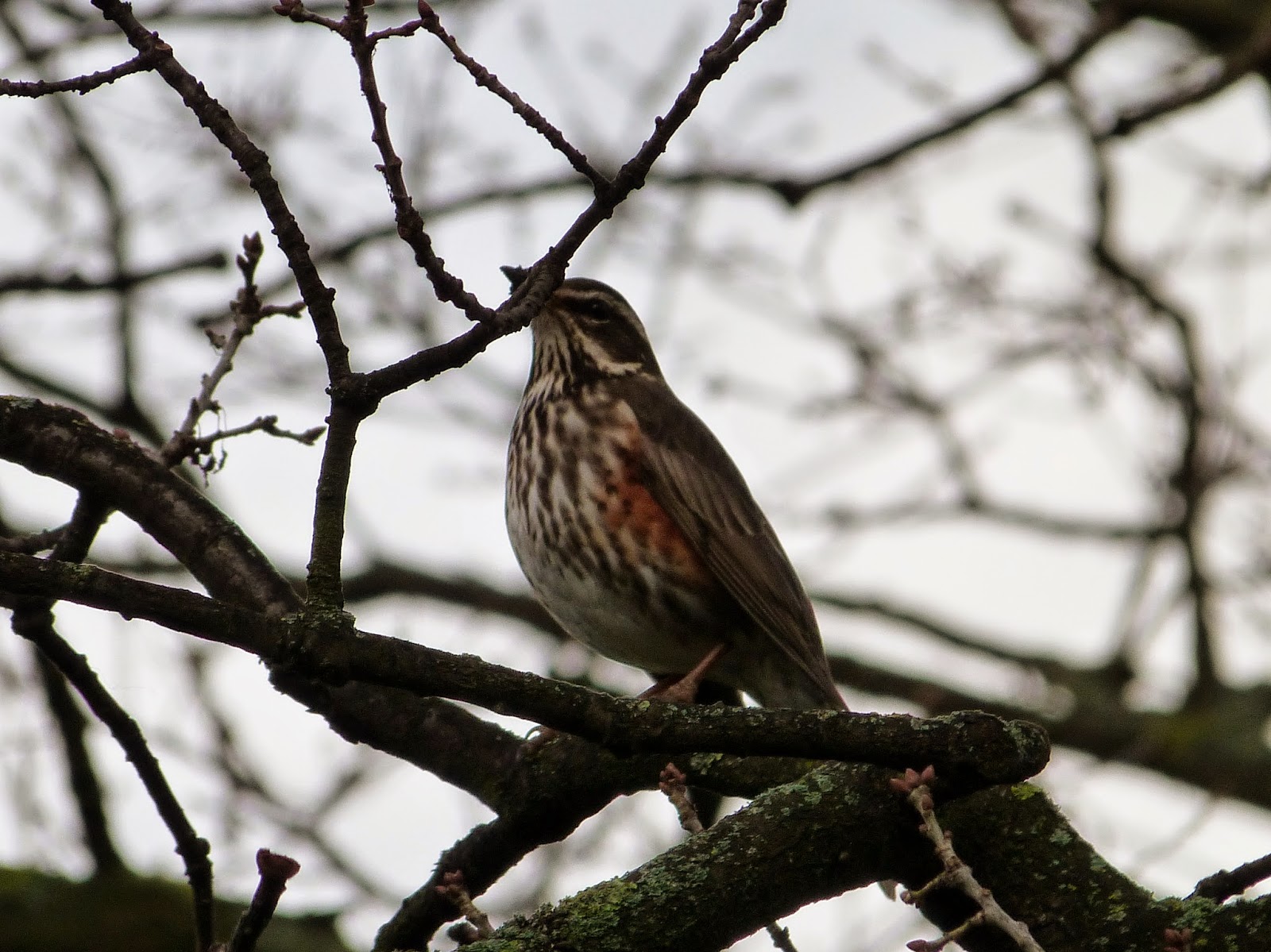 In addition to the birds already mentioned, we saw 12 Starlings, 9 House Sparrows, 6 Feral Pigeons, 5 Woodpigeons, 5 Crows and 5 Dunnocks, 3 Blackbirds, 2 each of Blue Tit, Chaffinch, Long-tailed Tit and Magpie and 1 each of Mistle Thrush and Goldfinch - making an impressive 23 species in total. Incidentally, 5 Dunnocks is a new record for Hilly Fields and two of them engaged in a mid-air courtship display which involved flapping their wings at each other. All in all, a busy and rewarding morning.
Posted by Tom at 16:03 No comments: Links to this post