Our October survey took place a day after the so-called St Jude's storm. By then, the wind had dropped, the clouds were white and fluffy and there was even some blue sky and sunshine. When we entered the park halfway up Vicars Hill and saw a Dunnock sitting on a branch in the border scrub, I knew we were in for a good morning. This is the area where we heard it singing in the spring and is presumably its main territory. Seen from below, the Dunnock appears rather nondescript and similar to a House Sparrow. In silhouette, however, a needle-point bill can be seen quite unlike the chunky beak of the sparrow. Although the Dunnock is still sometimes called the 'hedge sparrow', the two birds are completely unrelated.

We were then distracted by a small gang of Blue Tits chasing each other at high speed around the trees and performing their usual acrobatics among the branches. This reoccurred elsewhere and was probably a release of pent-up energy after the end of the moulting period. On the eastern wall of Prendergast School, a rainwater gully attracted the Tits attention, perhaps as a drinking and dunking hole. A Pied Wagtail was also spotted nearby. Great Tits were out and about and were even heard calling although rather faintly. They don't normally get into their two-note stride until after Christmas. Among the Eastern Rd hawthorns we were pleased to see a small flock of Long-tailed Tits which are also fast and agile movers. The RSPB Handbook's description of them as 'restless' seems pretty accurate.

Another highlight was the sighting of both male and female Great Spotted Woodpeckers in the Eastern Rd area. How can you tell them apart? The male has a red cap at the back of its head, the female doesn't (see photo here). Both have bright crimson feathers under the tail and all juveniles have a red patch at the front of the head (see below) which disappears with the first moult. In total, we counted 19 species during our walkabout. As well as those already mentioned, we saw or heard at least 15 Wood and 6 Feral Pigeons, 7 House Sparrows in and around the Cliffview hedge, at least 5 Robins calling, 5 Crows, 2 Magpies and 2 Blackbirds. We also heard a Chaffinch, a Goldfinch, a Ring-necked Parakeet, at least one Wren and caught brief glimpses of a Mistle Thrush and a Starling. The Starlings have not yet returned in force from the outer suburbs but should be back soon along with the Black-headed and Common Gulls.

As for the storm, what damage has it caused on Hilly Fields? Several trees have been felled including, sadly, one of the two crack willows on the south slope. Lots of branches and whole limbs have been broken off including one in which our Great Spotted Woodpeckers nested in 2012. On the whole, though (and despite the dramatic looking photos below), St Jude's storm wasn't in the same league as the great overnight storm of 1987 which killed 18 people in England, felled an estimated 15 million trees and of course immortalised a certain weatherman. 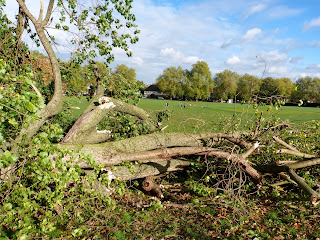 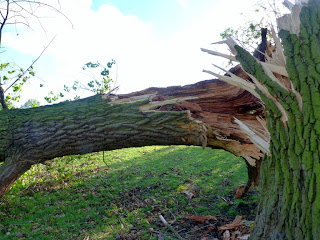 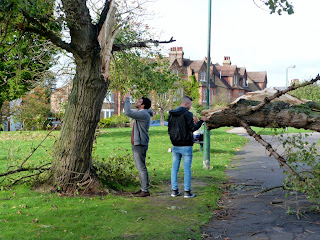 Posted by Tom at 22:01 No comments: Links to this post