It is almost six years now since the Hilly Fields Bird Champion Project was launched by Lewisham Council. To provide some feedback, I submitted a report to the Lewisham Biodiversity Partnership in April which included a list of all bird species seen in the park since the project began. The report was discussed at the May meeting of the Partnership and was welcomed. A further initiative may derive from it which I will report on at a later date.

I will not rehash details of the report here as it can be read on the Lewisham Nature Conservation blog. However, I have reproduced the bird list below with the addition of a Lesser Black-backed Gull seen since the report was submitted. The birds are classified under Everyday which means you should see or hear them every time you visit the park; Regular which means they should be seen or heard often (in their season), perhaps at least once a week; Occasional which I think is self-explanatory; Rare which means rare to the area and to Inner London as a whole. Indeed, if a Cuckoo or Short-eared Owl were to stay on Hilly Fields for a while, it would almost certainly attract a few twitchers!

Although I suggest in the report that bird population levels in the park have been stable since 2007, Keith has pointed out that local House Sparrow numbers have declined during this period. As the original bird champion, he recorded as many as 50 during 2007-8, whilst 10 is the highest number seen nowadays. The sparrows are usually in and around the Cliffview hedge (see the site map) and the answer may lie in the fact that roof repair work carried out in some adjoining Cliffview Road houses not long ago may have disturbed their nests. It is likely therefore that some of the sparrows have simply relocated elsewhere in the neighbourhood which is not short of this once ubiquitous bird. I've noticed a thriving population recently, for example, along the Ravensbourne at Cornmill Gardens.

A word about the Chiffchaff which is number 26 on the list. This is a warbler which usually arrives on our shores in late March and April. It is not by any means rare or even 'occasional' at other local sites. It can be heard regularly at Ladywell Fields and Brookmill Park, for example. At Hilly Fields, however, I've heard it only three times this spring and have suggested that it simply rests here before moving on elsewhere. On 2 June, however, I heard it singing from the top of an Eastern Rd tree for about 15-20 minutes as if it were seeking out a partner. 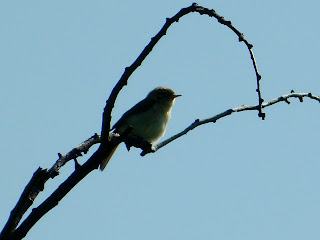 Could it be breeding in the park? The photo above was taken at full zoom against the sky and is not very clear, but this earlier post includes a clip of the Chiffchaff's short simple song which begins nine seconds into the video. It is perhaps the easiest of the warblers to identify. Please let us know if you hear it.

So here is the bird list - 41 different species identified since 2007. Onwards to the half century!