We've been holding Big Bird Watch events on Hilly Fields on the last Sunday in January since 2009. Alas, Covid-19 put a stop to that this year, but we managed to do a survey on Friday 29 January in two groups of two. Alas again, it rained from start to finish, probably the worst weather that we've ever surveyed in. Water was streaming off the hill. In the circumstances, a count of 19 species was not too shabby, particularly as it included 150 Black-headed Gulls in the north field which is probably a site record, 60 Redwings, 26 Starlings, 25 House Sparrows, 12 Robins and 10 Magpies. Sue also heard a Nuthatch calling and it's good to know that they're still around.  Also recorded were 3 Blackbirds, 3 Blue Tits, 3 Crows, 1 Collared Dove, 7 Common Gulls, 1 Dunnock, 5 Goldfinch, 5 Great Tits, 2 Herring Gulls, 4 Ring-necked Parakeets, 3 Woodpigeons and 1 Wren. We sent our results off to the RSPB for their annual survey.

The reason why we had so many gulls is simple. Rain brings worms to the surface. They listen to the rhythm of the falling rain and slink upward from their burrows. We saw them everywhere on the surface, on paths as well, and the gulls had a feast. Some of the other birds were joining in including the Redwings and Starlings.

Just a reminder about our new booklet 'Birds of Hilly Fields'. It's been selling well, despite lockdown, and the feedback has been good, but we still have plenty of copies in stock. At present, it's available online (see link below) and can be purchased either by itself at £3.50 or with a tote cotton bag and postcards for £10. We deliver to your door within a radius of 2 miles and all profits go to the Friends of Hilly Fields. It can also be bought from the Hilly Fields cafe when open. 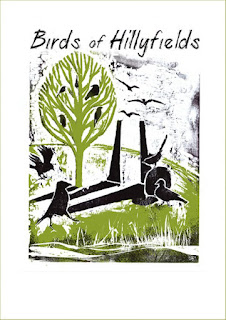