Last of the Redwing?

I was pleasantly surprised to fine a pair of Redwing in the East Field yesterday.  It's the furthest east I've seen them in Hilly Fields as they're usually in the West Field or the Meadow.  As winter visitors they'll be off to Iceland or Scandinavia by the end of this month, so let's enjoy them while we can.  Hopefully they'll return to Hilly Fields this October.

Another rare visitor to the East Field was a Mistle Thrush, usually seen around the school or south-west of it.  Along with Chaffinches, Blackbirds, Blue Tits, House Sparrows, Black-headed Gulls and a Common Gull it was pretty busy along the eastern perimeter of the park. 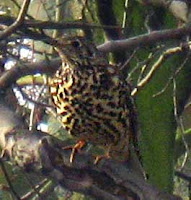 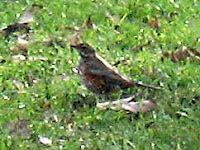 Rather poor photos snatched with my pocket camera show the Redwing foraging in the grass and Mistle Thrush in a tree
Posted by Keith64 at 11:50 No comments: Links to this post