We have a new addition to our bird list - a Little Owl which has the lovely scientific name of Athene Noctua. It was well spotted by Phil on 6 October as it perched on the tree house in his back garden adjoining Hilly Fields. After about 10 minutes, it flew off into the park. There has been one possible brief sighting since. 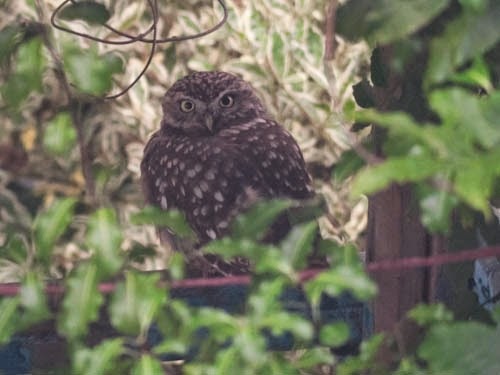 The Little Owl is indeed little for an owl, being about the same size as a Starling. It hunts from dusk to midnight and just before dawn, but it is not unusual to see it in the early daylight hours as Phil did. It may have seen a mouse in the back garden and may well return. If you are walking along the path that borders the back gardens of Cliffview Road, look and listen out. If you think you hear a cat miaowing, take another look because the Little Owl's call is rather like that. 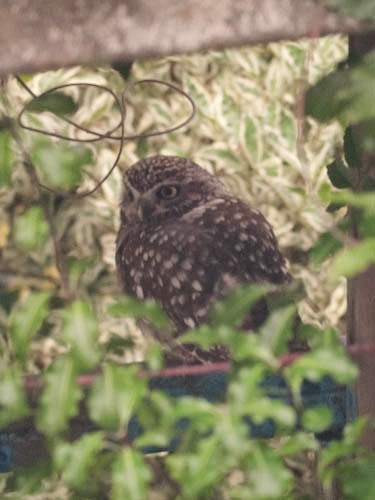 The Little Owl is not rare, but it is uncommon. I've asked the local birding community and the nearest site where a Little Owl is known to be present is Belair Park, Dulwich. So welcome to Hilly Fields, Athene Noctua - but be wary of the local cats. They may not like the competition.

We had mixed weather on 24th September for our monthly bird survey, starting with a clouded sky which led to rain, then clearing to blue sky and sunshine. The birds were reasonably active for the time of year and there were three particular highlights. Firstly, clear views of a pair of Chiffchaffs in the hedging along the eastern boundary of the school site. One bird .in particular hovered with fluttering wings in front of the trees and bushes as it looked for food. The Chiffchaff's main diet consists of insects including plant aphids, but it will sometimes eat berries of which there was a supply in the hedge. At this time of year, they will be building up fat and energy reserves for the migratory flight back to the Med and West Africa. Difficult to photograph because of their quick movements but the pic below shows the pale, lemony breast, white stripe above the eye and black line through the eye. The Chiffchaff is about the same size as a Blue Tit. 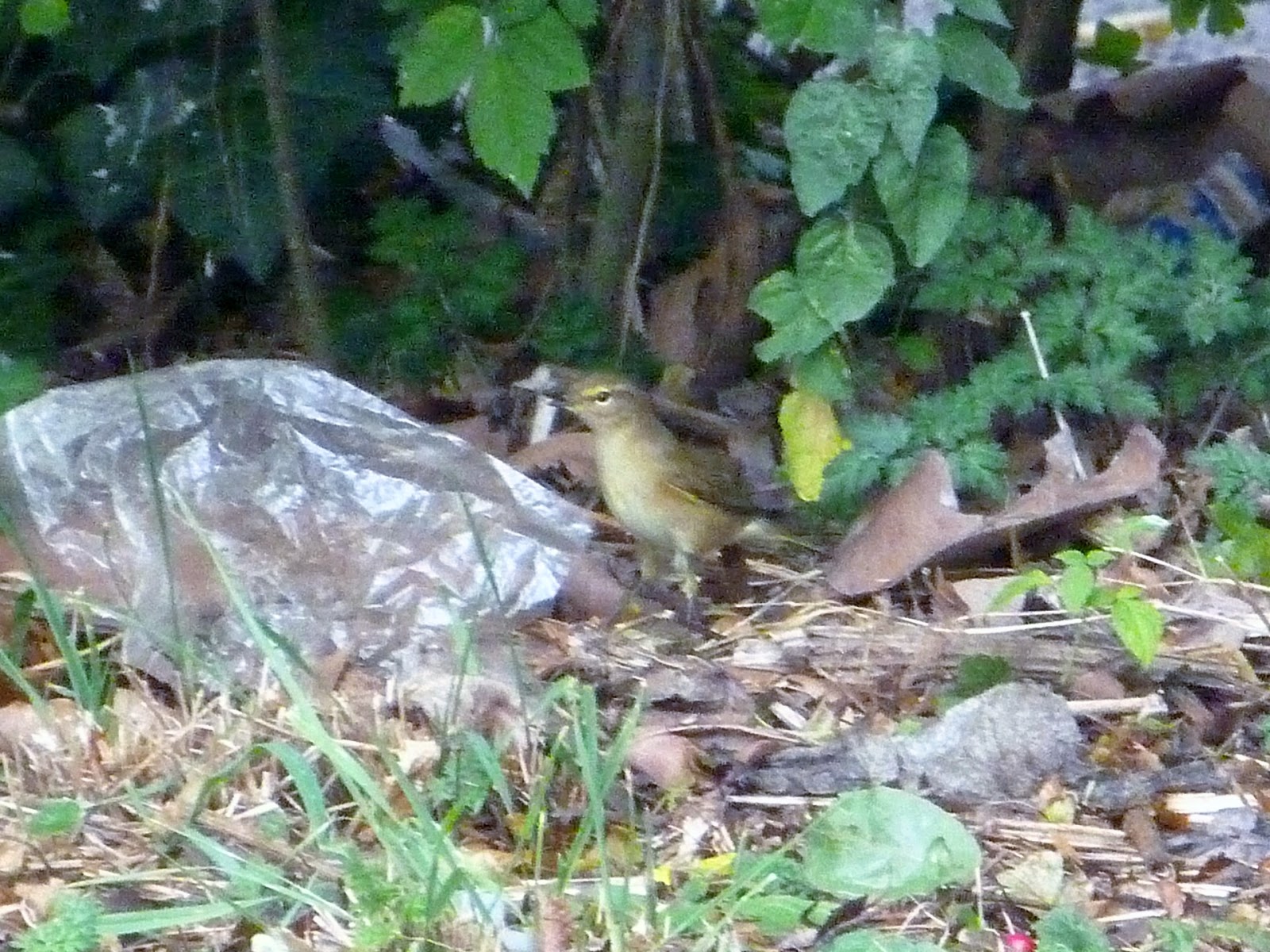 The next highlight came when Sue spotted a Jay flying over the south field from the direction of the Brockley & Ladywell cemeteries. It landed in an oak tree, but after only a few seconds flew back the way it had come.  We walked closer to the tree and soon discovered why its visit had been so short. There were already two Jays sitting in the branches and Hilly Fields is their territory. No way were they going to share their acorn supply. The Jay is the most colourful member of the Corvid family with its pink breast and the bright blue wing patches which often give away its presence when deep in foliage. Its call is a wild raucous screech.

The third highlight was the arrival of a small flock of Long-tailed Tits in the garden next to the bowling green. We became aware of them suddenly in the branches above us, twittering quietly to each other as they hopped around. Long-tailed Tits are very pretty birds but flit about so quickly that they're difficult to catch on camera. My photo taken from directly below shows the pale fluffy underbelly and the long tail which almost merges with the tree branches. I've added a photo from the Web which gives a clearer view of the whole bird. 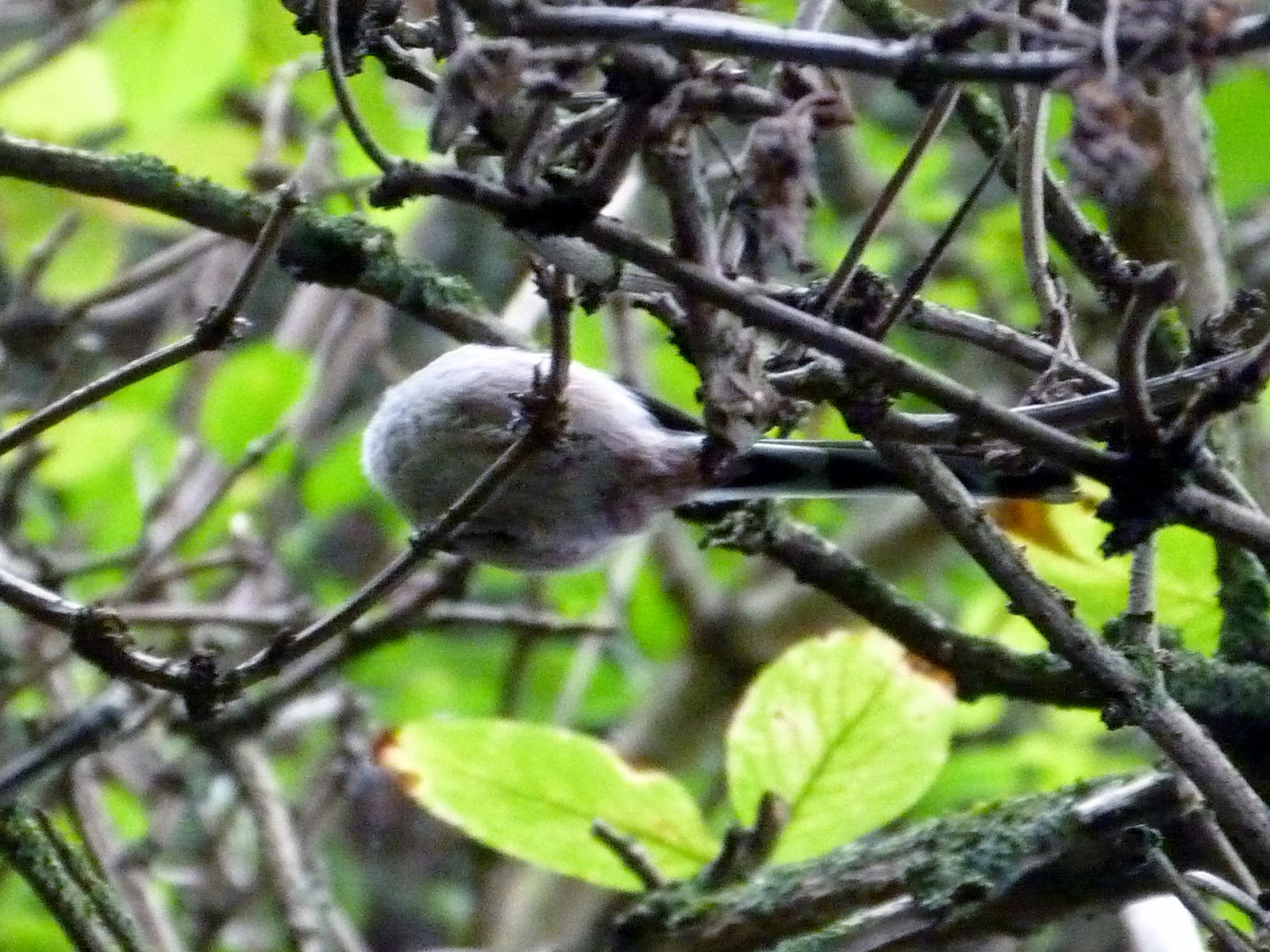 Elsewhere, Blue Tits and Great Tits were active in the trees and we even heard the latter's two-note 'teacher, teacher' call briefly. Robins were singing again now that their moulting period is over and we estimate there are at least 11 of them holding territories in the park. The fact that Robins are so territorial and don't move around much makes it easier to do an accurate count. There were 18 Wood Pigeons feeding on the grassland, 8 Feral Pigeons wandering on grass and pathways and at least 8 House Sparrows in the Cliffview hedge. The rest of the count: 5 Swallows passing overhead, 3 each of Blackbird, Crow and Magpie, 2 Ring-necked Parakeets and one apiece of Goldfinch and Wren. Giving us the same total as last month: 16 species.
Posted by Tom at 11:10 2 comments: