Cow parsley at chest height greeted us by the Lower Vicar's Hill entrance on 25 May when Sue and I carried out the monthly bird survey. We were also greeted by the song of the Chaffinch, the Wren and the Great Tit - the latter for once actually sounding like 'teacher, teacher' as Bill Oddie has described it. It is unusual to hear a Chaffinch in that location, but in fact we heard it singing almost everywhere we  went in the park. Either it followed us around or the bird has multiplied. Usually we see only one or two - if that.

What became evident as our survey progressed is that the breeding season has become the feeding season. Great Tits, Blue Tits and House Sparrows in particular have chicks to feed and there was much frantic foraging activity by the parent birds. Every year, we have seen how bedraggled Tits become by the end of June, exhausted by the constant to and fro-ing from nest to food source and back again. In fact, there is evidence that Tits time their breeding to coincide with the maximum availability of caterpillars as these are the best and most popular foodstuff for the young. I watched a Blue Tit nest elsewhere last week and estimated that the parents were bringing food 40 times per hour over a 16 hour day. (See here for a charming children's story which describes the cycle). Normally they have only brood per year which is not surprising.

Of course, one big risk at this time of year is that the chicks may become food themselves. We saw a graphic example of this in the upper part of Eastern Road when Sue observed a Jay with a fledgling Great Tit in its beak. Before it could get very far, a Magpie descended and, as the bigger bird, snatched the fledgling from the Jay and began to peck at it in the road before flying off with it. In the background, the parent birds were making an almighty noise though rather helplessly. Alas, most Corvids will eat eggs and snatch birds at the nestling or fledging stage, as will Great Spotted Woodpeckers. Sometimes, it's a bird eat bird world. 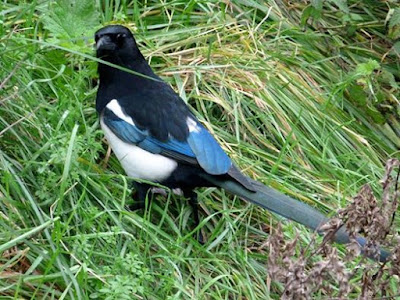 In the shade garden next to the bowling green, a pair of House Sparrows were repeatedly diving into the cow parsley, then flying off presumably with seeds for their young. And a fledgling Great Tit perched on the branch of a tree was shaking its wings in a begging display while the parents brought it morsels of food. Fledglings will often leave the nest a day or two before they're ready to fly.

In all, we saw or heard a respectable 18 species during this survey (see below). It  will be interesting to see if the Starlings are still there in June as they and their young tend to disappear in the summer months. The number of Wrens is an estimate as they are difficult to see, particularly when foliage is in full bloom. But they were singing loudly and as they stay in their territories, a reasonably accurate count can be made. Surprisingly, we neither saw nor heard our two resident warblers - the Blackcap and Chiffchaff - but I suspect they're still lurking.