This year's dawn chorus walk will take place on Wednesday 2 April. We will meet outside the cafe on Hilly Fields at 6 am - a time when I'm sure most of you are up and about anyway.

As in previous years, we will be extending the walk to take in the Brockley & Ladywell cemeteries. If you want to join us for that part of the walk only, be at the Brockley Grove gate at 7am. This is not the gate at the junction with Ivy Rd, but is on Brockley Grove just west of the bus stop and between Amyruth Rd and Henryson Rd on the other side.

What might we hear and see? Certainly Blackbirds, Robins, Wrens, Goldfinches, Dunnocks, Great Tits and Blue Tits; probably Long-tailed Tits, Starlings, Greenfinches, Chaffinches and Chiffchaffs; hopefully a Mistle Thrush on Hilly Fields, a Song Thrush in the cemeteries and Woodpeckers in both locations. 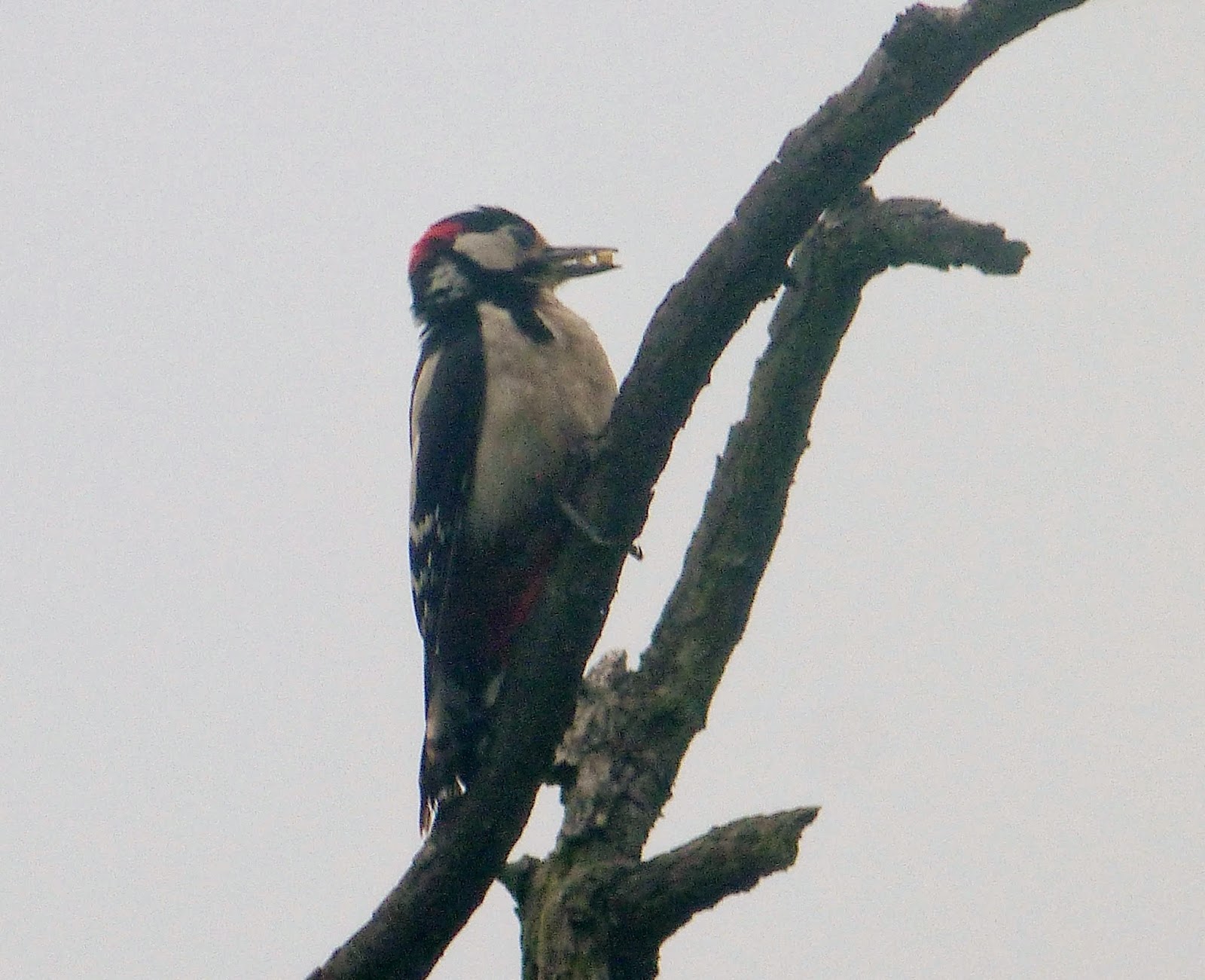 Do come and join us. It's educational, fun, life-enhancing and good for the soul. Honest! 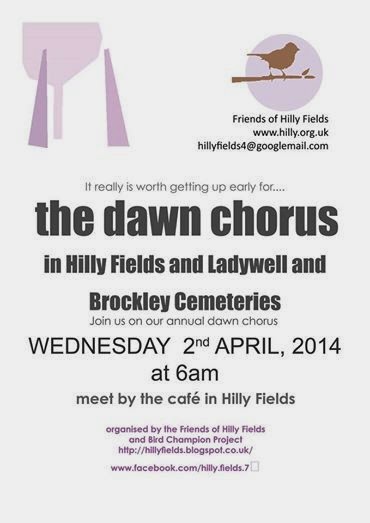 The sun shone on 24 February when Sue, Judith and I carried out the monthly bird survey. It was a day when spring seemed to have arrived early as if to compensate for all the stormy weather of the previous two months. The ground was still sodden in places but buds were growing on the trees, the crocuses were out and the birds were calling and singing all over the park. Blue Tits were particularly active and Great Tits with their insistent repeated calls were particularly vocal. Robins were singing more or less everywhere, Wrens kept erupting in flurries of notes and trills and we heard a Great Spotted Woodpecker drilling for the first time this year on the edge of the wood. But not all the birds were touting for partners. Some, like this Woodpigeon, were happy just to sit in the branches and soak up the sun... 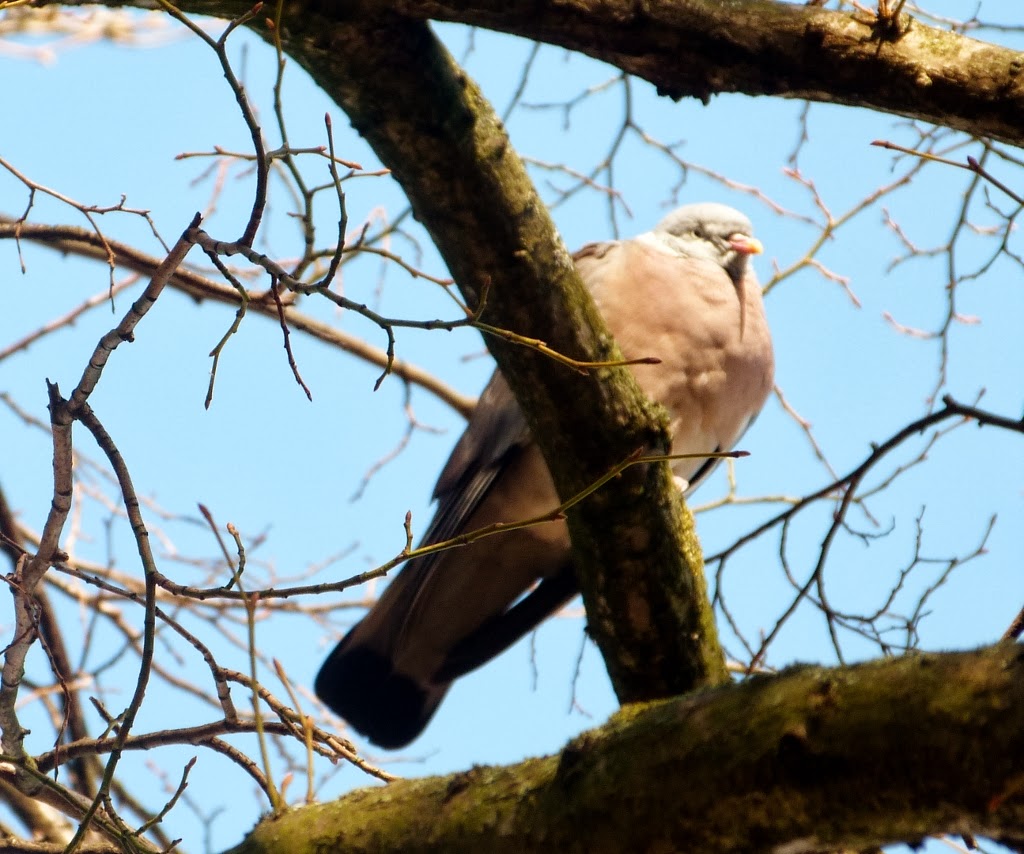 On Eastern Road, someone told me about a small flock of Chaffinches that frequent her Veda Road back garden. This was interesting because we never see many Chaffinches on Hilly Fields and, for that reason,  haven't devoted much blog space to the bird. However, we saw two later that morning including the cute female pictured below in the shade garden shrubbery. The distinctions between male and female Chaffinches can be seen in the Bird Champion notice board pictured at the end of this post, but briefly the male has a blue crown and pinkish cheeks and breast while the female has a grey head and browner cheeks and breast. Both have very distinctive black and white wing patterns. Their song is also very distinctive and easily remembered. The RSPB Handbook describes it as 'a descending series of trills that accelerates and ends with a flourish'. There are plenty of clips on You Tube and I've added one below. 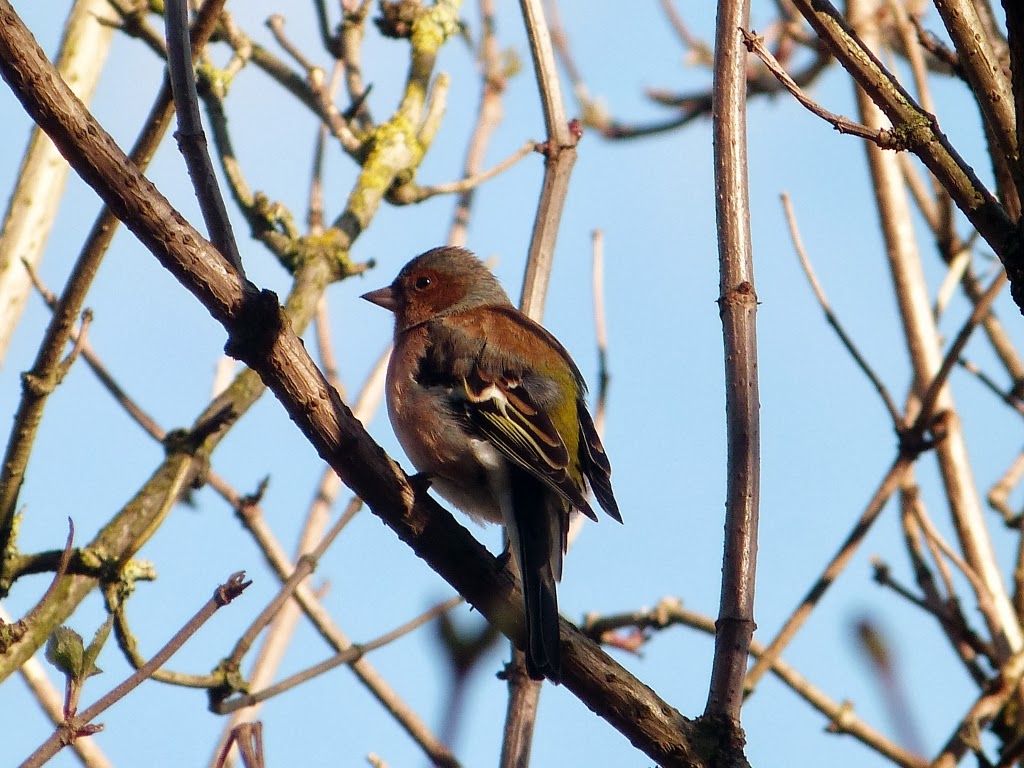 There were fewer Starlings around this month but they could still be heard in the trees. Starlings are famous mimics and copy all sorts of things including other bird calls, car alarms, phone ringtones and the wolf whistle. In fact, the gift of mimicry makes them potential social historians. The author Henry Williamson, who lived as a boy on Eastern Rd, set one of his novels The Dark Lantern in Victorian Brockley and describes the following:
'a starling was uttering its medley of local sounds and noises: errand-boy whistles, clopping of horses feet, milko! morning cry of milkman...cling-a-ling! of muffin-man's bell, bleat of sheep on the Hill, thin imitations of the songs of thrushes and other garden birds'.
I wonder what sounds the Starling might be mimicking a hundred years from now? Incidentally, that reference to 'bleat of sheep on the Hill' refers to a time when ewes and lambs were kept in a fold alongside the 'Grammar school' on Hilly Fields. 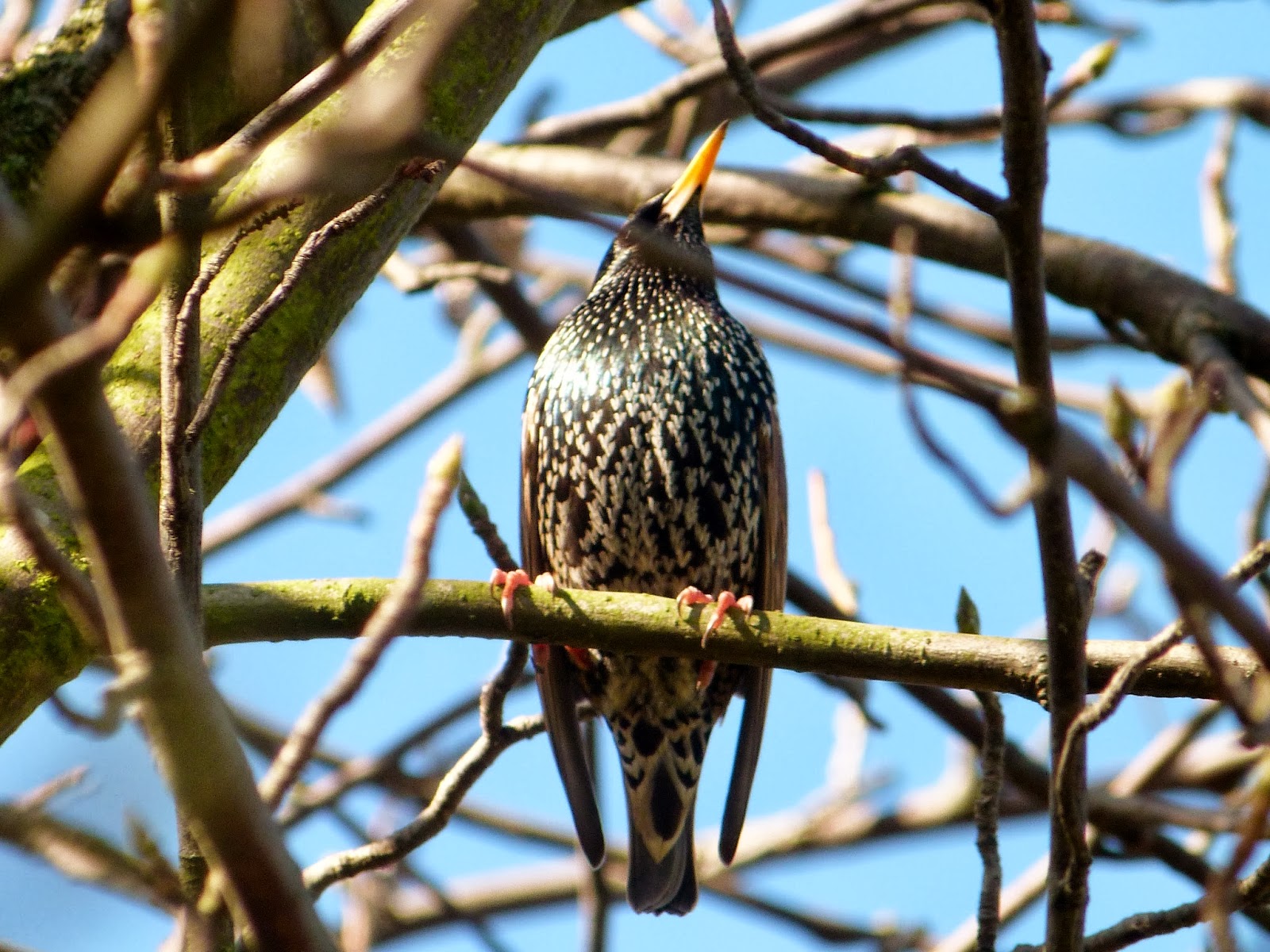 After two and a half hours of mooching about, we recorded a healthy total of 20 different species. In addition to those already noted, we saw 16 Common Gulls, 6 Black-headed Gulls, 5 House Sparrows, 3 gorgeous Greenfinches, 3 Crows, 3 Feral Pigeons, 2 each of Blackbird, Goldfinch, Long-tailed Tit, Magpie and Ring-necked Parakeet and a single lonesome Dunnock. Finally, thanks to Lee, our park-keeper, for promptly removing the graffiti which some underdeveloped human being had scrawled all over the Bird Champion notice behind the cafe. I'm glad to say it's now restored to its former lopsided beauty. 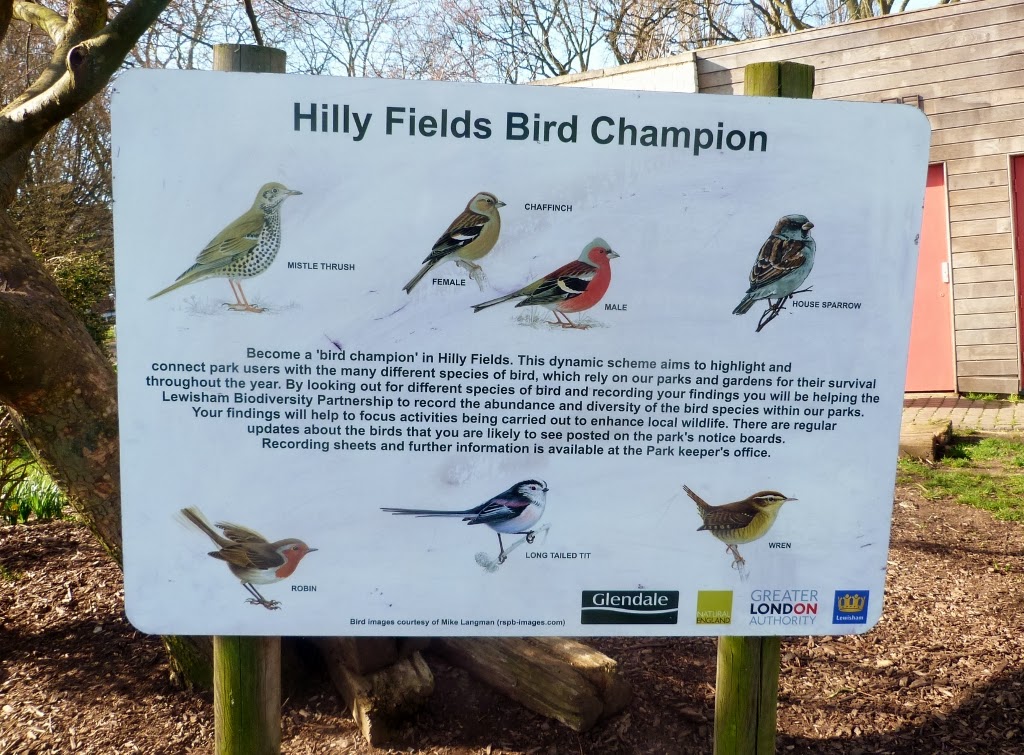