Blue Tits On Our Trail

Sometimes on our monthly bird surveys, we seem to be followed around the park by one particular species: Robins, for example or Chaffinches or Crows. On 31 August, it was the turn of the Blue Tits. All along our route, we heard their churring call and occasionally saw one flitting between the branches. Some may have been young birds born in the spring; the others were back in action after the huge effort of feeding their young and after the moulting period when they're extra vulnerable to predators like the Sparrowhawk. In this clip, the churring can be heard coming from a Blue Tit off camera and the bird you can see is responding to it.

We saw Great Tits too which are slightly bigger than Blue Tits with a black head and a thick black stripe down their breasts in the male (see photo below), a thinner stripe in  the female. Robins were singing more after their moulting period and the occasional Wren burst into its brief song as we passed. These are likely to be the only two birds we'll hear singing between now and the New Year. On upper Eastern Road, we had a brief glimpse of a juvenile Blackcap nibbling at the haws. The ripening of fruit on the trees and bushes is likely to bring more birds out into the open.

On the whole, it was a little livelier than the previous month and we recorded a total of 15 species. As well as those already mentioned, we saw 8 Woodpigeons, 7 Goldfinch, 6 Sparrows, 2 each of Blackbird, Crow, Long-tailed Tit and Magpie and singles of Chaffinch, Feral Pigeon and Ring-necked Parakeet. The Sparrows were in the Cliffview hedge and difficult to see clearly in the foliage, but one emerged long enough for a photo opportunity. It lacks the dark brown head and black bib of the adult male, but could be a juvenile male rather than a female. This is the time of year when the new kids on the block can cause confusion! 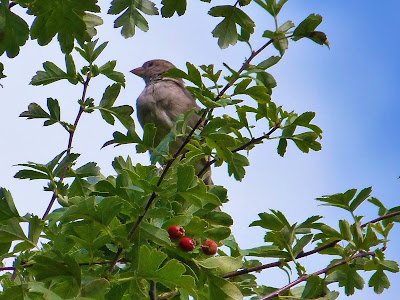 And finally, more Blue Tits. The clip below is over an hour in length, but just try watching the first few minutes for some great close-up footage of this hopelessly cute little bird.