I don't want to sound wildly optimistic but I think we may have reached a turning point. With temperatures soaring into double figures (19°C promised on Sunday), things are changing on Hilly Fields and no doubt elsewhere. On Wednesday morning, at least a dozen Redwings (with a few Fieldfares mixed in) were twittering excitedly in the West Field trees alongside Montague Avenue. It sounded as if they knew that the time was approaching for their delayed (by bad weather) flight back to Scandinavia. Sure enough, when I led a group of dawn chorus walkers over there the following morning at 06.30 hrs, the trees were silent.
The Black-headed Gulls departed sometime over the weekend. Today, Friday, I noticed one or two Common Gulls overhead but there was no sign of the usual flock on the grass, so they too have presumably gone forth to multiply. I also saw this morning, however, the two resident Mistle Thrushes singing for the first time this year and heard a Chiffchaff singing in one of the Eastern Road hawthorns. The Chiffchaff is a spring migrant which flies to the UK each year from the Med and West Africa - an olive brown warbler about the size of a Blue Tit. They have been arriving more slowly than usual, presumably because of the weather and there have been reports of them flopping in exhaustion on reaching the south coast beaches. But one at least has made it this far and they've also been heard in other nearby locations. The Chiffchaff is not always easy to spot, but its song is very distinctive and easily remembered.


Elsewhere, nest building is going on apace. A Crow's nest can be seen high in one of the London Plane trees on the northern border of the bowling green and the resident Magpies are nesting at the top of one of the Eastern Road hawthorns. A little further down Eastern Road just past the green gates, Long-tailed Tits have built a nest in a bramble bush, but it seems to have been abandoned. We can't be sure why, but it is a bad location - too close to the pavement and too vulnerable - and their nests also suffer from a high level of predation by other species.

Changes are visible in the plant world too where there really are "green shoots of recovery" to be seen. Cow Parsley is spreading across the ground, particularly around the lower Vicars Hill entrance, ready to accompany the May blossom next month. And the wild Sweet Violets which Nick Bertrand pointed out to us on the Rivers and People walk last month are now coming into flower. Look for a bright green patch just off the path which runs alongside the Cliffview Rd border. On the whole, there is much to look forward to in the coming weeks. 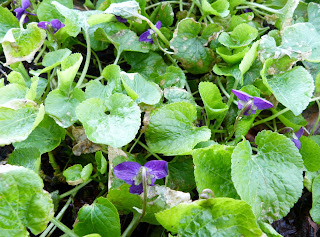 The dawn chorus walk on Thursday was well attended. 15 people turned up at 6 am after a night's rain which was still lightly persisting. Naturally, we heard Great Tits calling everywhere, Wrens with their mighty trilling song, a Blackbird singing beautifully on Eastern Road and saw a Great Spotted Woodpecker high in a tree on the Adelaide Avenue border. Nothing spectacular but sometimes the simplest things can mesmerise. People were much taken by the sight of a female Chaffinch singing on a low branch only a few feet in front of us outside the school. After Hilly Fields, we went on to the Brockley and Ladywell cemeteries where we heard Robins (strangely quiet on Hilly Fields), a Dunnock and, in the distance, the laughing call of a Green Woodpecker - though not everybody heard that, including me! However, everybody did hear a Song Thrush repeating its varied phrases (as many as a hundred in its repertoire) from the top of a tree. 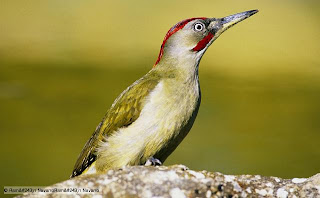 The cemeteries are of Victorian origin and, as well as containing much local history, they are in effect a nature reserve in the heart  of Lewisham. In fact, the council has listed them as a Grade 1 Site of Borough Importance for biodiversity and nature conservation purposes. The Friends of Brockley and Ladywell Cemeteries have their own website - http://www.foblc.org.uk/ - and hold guided walks. The next one is on Sunday 21st April starting from the Brockley Road gate at 2pm and lasting about 1 hour 45 mins. Thanks to Lewisham Council for allowing us access to the cemeteries outside normal hours, special thanks to Mike Guilfoyle from the Friends who came along at 7 am to unlock the gate for us and thanks to Rachel for publicising the event via Facebook and http://www.hilly.org.uk/

This years dawn chorus walk will take place on Thursday April 11 starting at 6am. This is an hour later than usual (by public demand), but should still be close to dawn as the clocks went forward last weekend. We will meet outside the cafe on Hilly Fields, walk around the park and then go on to Brockley and Ladywell Cemeteries which together are listed as a Grade 1 Site of Borough Importance for nature conservation purposes.

Birds we can expect to hear on Hilly Fields include Blackbird, Robin, Wren and probably one of the Dunnocks which have been vocalising frequently in the last few weeks. In addition, we should hear Magpies chattering, Crows crowing, Blue Tits/Long-tailed Tits tseeping and, almost certainly, that 'Johnny Two Note' - the Great Tit. If we're lucky, we may hear a Mistle Thrush singing (seen but not heard so far this year) or a Great Spotted Woodpecker drumming its bill against a tree trunk.

In the Brockley and Ladywell Cemeteries, we may hear a Song Thrush (as we did last year) and see/hear a Green Woodpecker and Britain's smallest bird, the Goldcrest. We may also catch a glimpse of one of the Sparrowhawks which have nested there in recent years. If a 6.00 am start is too horrific to contemplate, we will be entering the cemeteries at 7.00 am via the side gates on Brockley Grove which are opposite house no. 212 and between Amyruth and Henryson Roads. You are welcome to join us there. Please bring binoculars if you can. The walk will finish by 8.00 am but you can drop out at any stage.

Just time for a brief mention of the March bird survey which Terry and I carried out on the 28th of last month. The birds were a little quieter than usual but by the end of our walkabout, we had seen or heard 18 species. It was good to see a small flock of Redwing in the south field, to hear a pair of Dunnocks serenading each other and to see Chaffinches, Long-tailed Tits and Mistle Thrushes. The north field held a flock of about 60 gulls with Common Gulls again living up to their name and outnumbering the Black-headed Gulls by 2:1. However, the Black-headed Gulls are also living up to their name and have developed their 'black' heads (actually a dark chocolate colour) which makes it dead easy to tell the two different types apart. This is their breeding plumage and they will soon be off elsewhere to look for nest sites and partners.

In addition to the above, we also saw and/or heard Wrens, Magpies, Blue Tits, Great Tits, Wood Pigeons, Robins (all over the place), Crows, House Sparrows, Greenfinches, a Great Spotted Woodpecker and, last but least, a lone Parakeet.
Posted by Tom at 23:45 No comments: