The Gulls Have Landed

We were joined by Judith from Glendale for our monthly survey on 25 November. Judith helps to manage the Lewisham bird champion scheme and also assists at our annual Big Birdwatch event (for news of which see below). There wasn't anything exciting to show her such as woodpeckers or birds of prey or a partridge in a pear tree, but we found 16 different species including most of the regulars and a couple of irregulars. The latter consisted of a Dunnock flitting around in the bushes at the back of the bowling green and a small flock of at least 5 Greenfinches seen in the Eastern Road area.

Perhaps the most significant event, however, is the return of the Gulls for their winter residence on Hilly Fields. Only 10 were counted on this occasion but the number will increase as winter progresses and, based on past experience, they will be with us until early April. The gull most often seen in London (and in Lewisham) is the Black-headed Gull, but Hilly Fields bucked the trend last year with a higher proportion of Common Gulls present. That seems set to continue as eight of those we saw in November were Common and only two were Black-headed. How do you tell them apart? The Black-headed Gull has a red bill and legs, the Common Gull has a yellow bill and legs. The Black-headed Gull has a black spot next to its eye in winter, the Common Gull doesn't. The name 'Black-headed Gull', by the way, is misleading. It has a white head in winter and even in its spring/summer breeding plumage, the head is dark chocolate brown rather than black. These things are sent to test us.

Elsewhere around the park, we heard plenty of Robins singing and occasionally saw one, the full complement of 10 House Sparrows was present in the Cliffview hedge, the Blue and Great Tits were active in the trees and a flock of at least 10 Goldfinches flew over. The rest of the list: 5 Blackbirds, 4 Crows, 4 Woodpigeons, 3 each of Feral Pigeon, Magpie and Ring-necked Parakeet and a solitary Chaffinch. And also elsewhere in the park, mysterious 'fairy rings' of storm-damaged tree stump have been appearing. I don't suppose the Friends of Hilly Fields could have had anything to do with this? 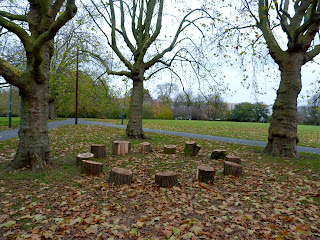 RSPB BIG BIRDWATCH 2014
Time marches on and we will soon be holding our annual Big Birdwatch event at Hilly Fields to coincide with the RSPB's Big Birdwatch weekend. Our event will be held by the cafe on Sunday 26 January between 11.00 - 14.00. You can either pick up a bird guide sheet from our stall and do your own survey or come round on one of our guided bird-spotting tours. We will also be offering activities for children and a fun bird quiz! Hope to see you then.
Posted by Tom at 15:14 No comments: Links to this post