Things were quiet again during the first part of our bird walk on 19 October. The dull, cloudy weather didn't help and it seemed  as if we were in for an uneventful time. Robins were singing here and there, safeguarding their territory until the mating season in January. A flock of five Goldfinches tweeted each other as they flew overhead. A Jay screeched in the little wood. Not much to write home about or fill a blog post. But thankfully things got better when we walked over the ridge to the north field where the cricket pitch is - normally an area frequented only by pigeons and wintering gulls. And sure enough there was our first Black-headed Gull of the winter, treading the grass all on its ownsome apart from a friendly Woodpigeon. Other gulls will arrive as they do every year when the weather gets colder. Incidentally, the BHG only has a 'black head' during the breeding season but it's stuck with the name all year round, poor thing. 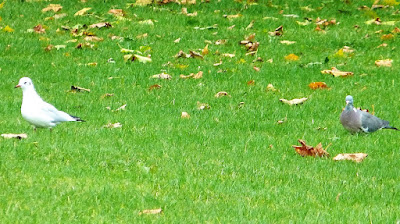 The gull was only the start of things. As we walked down the slope to get a better look, a Pied Wagtail landed on the cricket pitch and was soon followed by a second one, a juvenile with brown upperparts rather than black. Nice to know they're continuing the family line. We see Pied Wagtails from time to time in the park, usually on short grass including the bowling green, but sometimes on the paths. They're not too fussed by human presence and, unlike the BHG, live up to their name by wagging their tails almost continuously. After that, Sue and Judith saw a Mistle Thrush, then all three of us saw a female Great Spotted Woodpecker in trees opposite the bothy, pecking at the bark for insects. It had been worth getting out of bed after all.

In total, we saw and/or heard 16 species during our survey. The final tally was 23 Woodpigeons, 17 Feral Pigeons, 5 each of Crow, Goldfinch, Great Tit and Robin, 3 each of Blackbird, Blue Tit and Ring-necked Parakeet, 2 each of Magpie, Pied Wagtail and Wren and 1 each of Black-headed Gull, Great Spotted Woodpecker, Jay and Mistle Thrush. And finally, Sue spotted a Spindle plant near the bothy which has beautiful pink fruits at this time of year and orange seedcases within. Spindle is a classic hedgerow plant, fed upon by small birds such as sparrows and tits and by the larvae of several moths. Great to see it in the park whether planted by humans or Mother Nature. 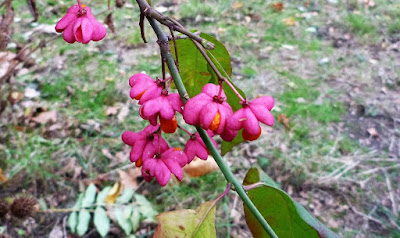