This week the RSPB - in partnership with the London Wildlife Trust - launched its "Cockney Sparrow" count. It is asking Londoners to spend an hour or so between now and 12 July counting sparrows and recording the highest number seen at any one time. The count can be done anywhere in London - in your garden, on the street, in the park, near your workplace, wherever you like. There is a simple form available which should be completed and sent in - see Downloads on the right hand side of the following web page: http://www.rspb.org.uk/news/313435-cockney-sparrow-count. The RSPB emphasises that it does want "nil returns", ie. not seeing any sparrows is just as important to the survey as seeing them. 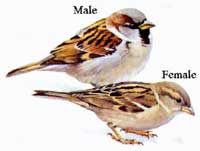 I'm sure you all noticed the deliberate mistake in my last post, calling the young woodpecker a "fledgling". As it was still being fed in the nest by its parents, it should really have been called a "nestling" - or perhaps just a "chick". A young bird is not a fledgling until it has fully grown its flight feathers and can flutter about a bit in the great outdoors. Just keeping you on your toes.

I saw a chick appear at the hole again on both 4 and 5 June, but since then no sightings of the young (I'm being positive and assuming that there is more than one) and no sound coming from the nest. At sundown on 9 June, however, Sue saw an adult Great Spotted Woodpecker fly into the hole. As the chick I saw looked very healthy, we are fairly confident that they have now fledged, but perhaps the family is still returning to the nest at dusk to roost.

At this stage of their lives, the fledglings will still be around the park somewhere and will still be being fed bill-to-bill by their parents. They should be easily identifiable by the red crown which will not disappear until their first moult in the autumn. Please let us know if you see them. This excellent You Tube video clip shows a fledgling being fed.

The late May heatwave was still in progress when Sue and I did our monthly bird survey on Tuesday 29th. The park was looking good in the sunshine even though all the beautiful white blossom on the Hawthorns and Horse Chestnuts has disappeared. The birds were lying low at first, so much so that we started to count the Speckled Wood butterflies instead, except there were too many of them!

Then we had a surprise - a constant high-pitched noise heard behind Prendergast School turned out to be coming from a hole high up in some kind of ornamental oak tree. The arrival at the hole of a male Great Spotted Woodpecker and then soon after a female confirmed that we had found a nest with hungry woodpecker fledglings. They couldn't be seen from ground level, so numbers are uncertain but we will be keeping an eye on the nest. There are normally between five to seven eggs in a GSW brood, but eggs and fledglings can be taken by other birds while the parents are out hunting for food. While we were there, the female was seen at a tree some thirty yards away, presumably digging insects out of the bark.

Sue also found a Blue Tit nest in a dead tree near the tennis courts. One of the parents was in attendance while we watched. Apart from that excitement, we noted a slight revival in the number of Starlings, ten being spotted together at one point. Otherwise the following birds were seen and/or heard, all in small numbers: Blackbird, Carrion Crow, Magpie, House Sparrow, Woodpigeon, Chaffinch, Goldfinch, Great Tit, Wren, Robin and Ring-necked Parakeet.

A few days earlier (25th), Sue spotted three Pied Wagtails on the bowling green and then witnessed a Sparrowhawk swoop down on them! All three appeared to evade capture. 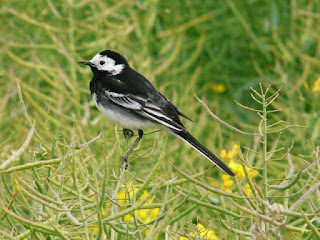 Woodpecker Update: the picture below was taken by my daughter on Saturday afternoon (2 June) and shows one of the fledglings peeping out of the hole. The crimson crown on top of its head will disappear with its first moult. Hopefully, it's not an only child... 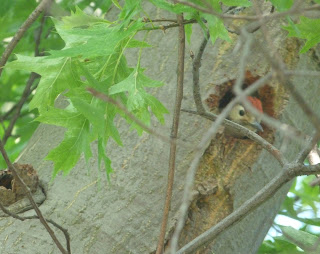