Winter Is A-Coming In

The start of our monthly bird survey on 18 November was marked by almost simultaneous sightings of a Crow, a Jay and a Magpie - three members of the same avian family, though with very different plumages. After that, the park was fairly quiet and the counts were low despite fine weather. But by the end of the morning, we had seen a good range of species including some Starlings back from their country retreat and noisily rejoicing in trees by the tennis court. Only half a dozen so far, but the numbers will steadily increase. We've had as many as 80 in winters past. 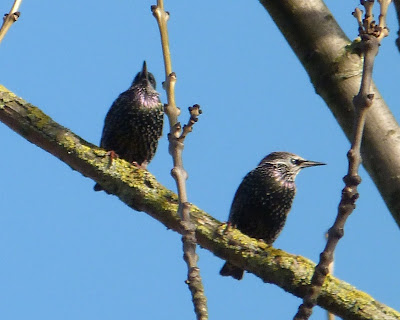 The garden next to the bothy came up trumps again when Sue spotted a Goldcrest - Britain's smallest bird - up in one of the conifers. We have seen it before on Hilly Fields but not often. It loves conifer trees as its thin little beak is ideal for picking out insects from between pine needles. The Goldcrest gets its name from the bright orange patch on its crown, but it's very difficult to see that from below. We also saw the family flock of Long-tailed Tits again and Judith spotted a female Chaffinch - a bird we see (and hear) more often in spring and summer. 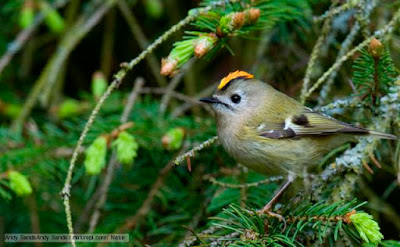 After failing to find any Sparrows in the Cliffview hedge, we thought we would have to settle for 15 species. However, after refreshments at the cafe, Sue and Judith spotted a pair of Mistle Thrushes and another Black-headed Gull (or possibly the same one as last month), raising our total to a respectable 17 species. Here is the full list of birds as recorded in our BirdTrack records.

Although the autumn remains mild on the whole, the leaves are falling fast on Hilly Fields, helped by Storm Barney, the tail-end of which was still blowing as we went round. This will help to make the smaller birds more visible in the winter months to come. And by the way, the Friends of Hilly Fields Big Birdwatch 2016 event will take place on the morning of Sunday 31 January. There will be guided walks and children's activities, as well as an RSPB stall. More info soon.

Did I Mention the Crows?

We seemed to be followed by Crows when we did our monthly bird survey on 30 October. Noisy Crows, mean and hungry looking Crows. Perhaps they were warming up for Halloween next day. And the weather was sombre too, even after the rain stopped which meant many of the birds kept quiet and out of view. We saw most of the regulars, though not in great numbers and heard the occasional burst of Wren song around the wood and Upper Eastern Road. The Crows were there too, waiting for us in the autumnal trees. 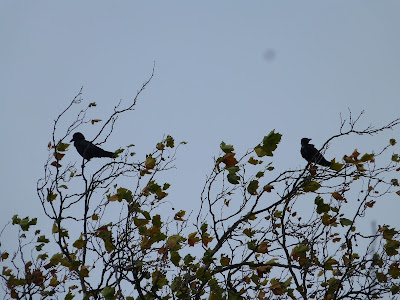 We were expecting to see a few gulls on the cricket pitch when we reached the north field. They have been moving into Inner London for the winter. In the event, there was one solitary Black-headed Gull on the ground and maybe three or four up in the sky. That name - and I say this every year - is misleading. In spring and summer, its head is a beautiful chocolate brown colour; in winter, its head is white albeit with a small dark patch behind the eye. Note the red legs and bill. 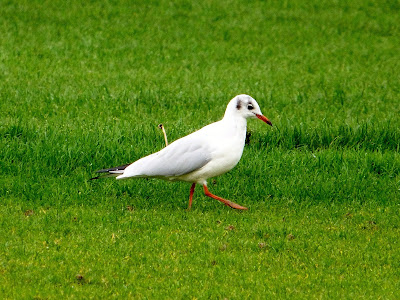 The best bird of the day - our reward for two hours of trudging - was waiting for us in the Cliffview hedge: a Coal Tit, seen briefly but clearly before flying away. The Coal Tit has a black head, hence its name, and is the same size as a Blue Tit. It has a prominent white patch at the back of the head. We've seen them before on Hilly Fields but not often. By the way, there were some Crows nearby too.

Actually, Crows are good to have around on the whole. They band together and mob birds of prey, driving them away, thus providing a service for the small bird community. And maybe saving a few pigeons too. Also, if you look closely, you'll see that their plumage isn't pure black but has some very subtle tinges of blue. 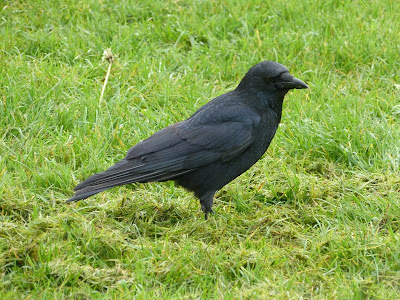 The full list of birds seen and/or heard comprises Wood Pigeons, Feral Pigeons, House Sparrows, Ring-necked Parakeets, Blackbirds, Robins, Wrens, Great Tits, Blue Tits, Goldfinches, a Coal Tit, a Black-headed Gull, Magpies and, er, Crows. A total of 14 species in all. And so after finishing our circuit, we trudged up the hill to the cafe. You'll never guess which bird turned up there. 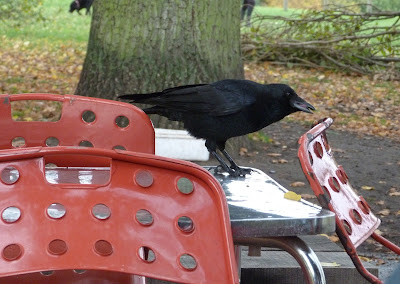 Posted by Tom at 10:56 No comments: Links to this post