Our December bird survey took place on the 21st - a fine sunny day though the ground was still rain sodden in places. It was also the winter solstice, the shortest day of the year and, according to some, the day on which the world would end - although the Mayans were saying that was baloney. And of course they were right.

The better weather brought plenty of birds out, but the highlight was a clear view of a female Blackcap in the garden between bowling green and bothy. Blackcaps are warblers with a pretty song which we heard often last spring. They are still mainly spring migrants to the UK and spend the winter in Spain, Portugal or West Africa, but as our climate has warmed, a small population overwinters here (estimated as "3000 and increasing" by the RSPB). By coincidence, Sue had seen a male Blackcap in her garden a few days earlier, so it is gratifying to know that they are hanging on in lovely Lewisham. The male has a black head (hence the name 'Blackcap') and the female a brown head; both have a light grey breast. Our female didn't stay around long enough for me to get a photo, but here's one from the Web.

Just before the Blackcap appeared, we saw a Dunnock (possibly two) scrabbling around in the undergrowth. Dunnocks seem to be permanent residents of Hilly Fields, though we've never seen more than one or two at any one time and I doubt that there are many around the park. They are small, furtive birds that tend to creep around close to cover.

In all, we saw 17 different species during our walkabout. The 'big' numbers were 22 Blackheaded Gulls, 13 Starlings, 10 Woodpigeons and 9 Common Gulls. There were 6 House Sparrows in the Cliffview hedge which is slightly more than usual. We heard the high-pitched trilling of Goldfinches quite often, but never saw more than 4 together. Similarly, we heard and saw Robins, Great Tits and Blue Tits galore but never more than 3 at any one time. We also saw small numbers of Magpies, Crows, Blackbirds and Ring-necked Parakeets as well as a solitary Chaffinch and at one point heard a Greenfinch sneering at us from somewhere out of sight. Here's a shot of one of the Starlings high up in a poplar tree -they really do have attractive glossy speckled coats though you need a close-up view to appreciate it. 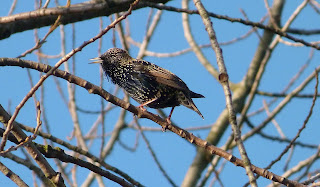 In other news, the Tawny Owl was heard again earlier this month by a Cliffview resident (thanks, Keith!).  Great Tits which have been quiet since early summer can now be heard calling most days and other birds should be getting more vocal from January onwards. On which 'note', may I thank everyone who takes the time to visit and read (and occasionally comment on) Hilly Fields Birdwatch and wish you all the best for 2013.
Posted by Tom at 22:18 11 comments: Links to this post

What a difference a month can make. At the end of October, I was moaning about the "dense foliage" hiding the small birds from view. By 27th November when we did this month's bird survey, the trees were almost bare, having been helped by some strong autumn winds to shed their leaves. As a result, the small birds were much more visible, even through the drizzle that splattered our optical aids. Walking around the park, we saw and/or heard at least 8 Robins, a couple of Wrens moving around tree trunks looking for insects, Chaffinches, Blue Tits, plenty of Great Tits (with a couple calling but not yet in full voice) and a small number of Long-tailed Tits alongside them. Close up, the Long-tailed Tit is an excessively cute little bird as can be seen in this recent photograph by Dave Bushell from the Kent Wildlife Trust page on Facebook. 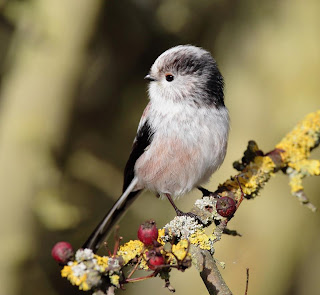 Winter flocks are building up as well. At one point on Eastern Road, we saw about 20 Goldfinch suddenly rise en masse from a single tree, startled by a Mistle Thrush flying nearby. And at least 20 Starlings were making a communal racket in a tree near the playground. On the lower field, the Black-headed Gulls had returned in force, having been absent for most of the month. Perhaps they'd heard that the weather was about to turn cold. We counted 40 in total with a pair of Common Gulls among them. And along the path that borders the Cliffview Rd back gardens, we found 7 House Sparrows lurking in the hedgerows - which almost does constitute a "flock" these days for what was once the commonest bird in London. 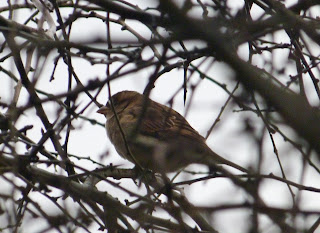 In addition, we saw Wood Pigeons, Feral Pigeons, Blackbirds, Crows, Magpies and our old friend or enemy, the Ring-necked Parakeet. A respectable tally of 18 different species in all.
Posted by Tom at 22:45 No comments: Links to this post