Herring Gulls Have Landed (And the Big Birdwatch Is Coming)

Our last bird survey of 2016 was on the frosty, misty morning of 30 December when sensible folk were staying in bed unless they had work to go to or dogs to walk. Your intrepid bird champions, however, ventured into the outdoors to watch, listen and count the birds and occasionally (dare I say it?) twitch with cold. 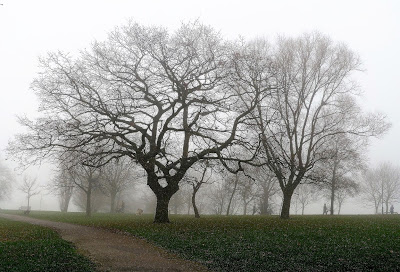 Thankfully, the birds were active. We were particularly pleased to see a small flock of Long-tailed Tits for the first time in months and a large flock of Goldfinches twittering around the trees beside the school. Great Tits were calling regularly - an early sign of hormonal awakening - and Robins were singing all along the trail. In the little wood, one Robin was so keen to get his photograph in this blog that he came daringly close. 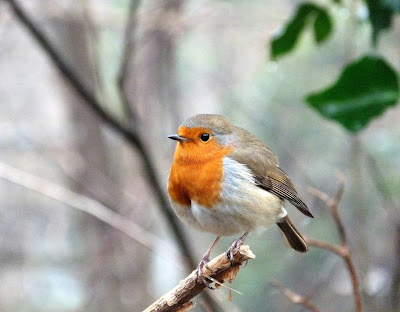 We saw a Mistle Thrush near the Whitebeam tree and watched a pair of delicately-fluttering Collared Doves descend on trees beside the bowling green. We glimpsed a pair of foxes there too - one of which ran off across the green! They will be out and about more in daytime as the weather gets colder and foraging for food becomes more urgent.  We counted 25 Common Gulls on the north field and one Black-headed Gull, but the real highlight was the presence of two Herring Gulls by the cricket pitch - one adult and one juvenile. Herring Gulls! - I hear you shriek. That mean-looking bird with the blood-red spot on its bill that steals your chips at the seaside? The very same. And it's the first time we've recorded them actually on Hilly Fields (instead of flying over high in the sky), which brings our Bird List total to 48 species since the bird champion surveys began.

The final tally was 25 Common Gulls, 15 Goldfinches, 12 Robins, 8 Long-tailed Tits, 6 each of Feral Pigeon and Woodpigeon, 3 each of Blue Tits, Crows and Parakeets, 2+ of Blackbird, Collared Dove, Great Tit, Herring Gull and Magpie, 1 each of Black-headed Gull, House Sparrow and Mistle Thrush. A total of 17 species in all. 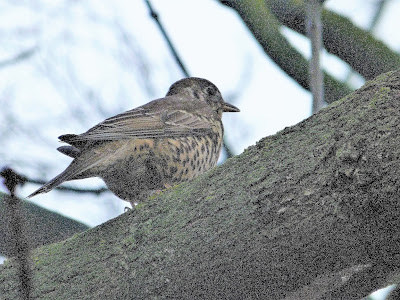 Our next survey will be one that anyone can take part in as it's our annual Big Birdwatch event. The date is Sunday 29 January from 10.30-12.30 on Hilly Fields and as well as providing a guided bird-spotting walk around the park, we'll give out ID sheets for anyone who wants to go it alone. The Friends of Hilly Fields will have a stall outside the cafe where there'll be bird-related activities for children and information for adults. We'll chalk up the 'scores' on our blackboard as usual and send them off to the RSPB as part of their national Big Garden Birdwatch that weekend. Hope to see you there. 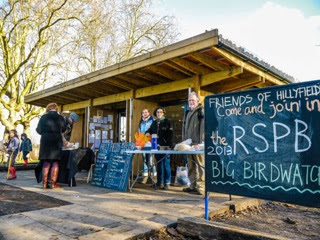 Posted by Tom at 19:18 No comments: Links to this post