The last day of October was overcast and windy with rain showers also forecast. These are not the sort of conditions which entice birds out into the open, particularly when there's still plenty of dense foliage for them to shelter in. My expectations were low therefore as I trudged up Vicars Hill towards the park. On meeting Terry, however, who joined me for this month's survey, I discovered that he'd had already seen a flock of Long-tailed Tits, a Goldcrest and a Great Spotted Woodpecker all in the Eastern Road area! By the end of our walkabout,we'd clocked a healthy total of 18 different species. The Goldcrest, which I saw later in the garden area was hanging out with the Long-tailed Tits. It is officially Britain's smallest bird and has a quiet high-pitched call. The yellow and black striped head crest (from which it gets its name) is difficult to see from the ground and I'm not sure I would have recognised it without Terry's expert eye. This is only the second time that we Bird Champions have seen one on Hilly Fields, the last being in March 2009. Here's a cute little clip from You Tube:


The other significant feature of our survey was the return of the gulls which are moving back into the city now that the temperature is dropping. Small in number at present - 9 Black-headed Gulls and 2 Common Gulls waddling around next to the cricket pitch - but more will follow. The Starlings are also back - we counted 13 noisily convening in one of the trees on the Northern field - but again more will turn up as the autumn and winter progresses. We counted 80 during the RSPB Birdwatch event last January. Here's a pic of them dropping in to join a gull on the grass. 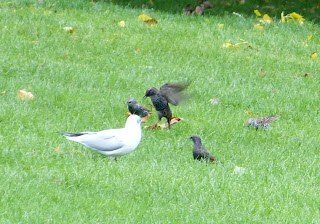 Also seen or heard: several Robins calling in different places, one briefly singing; 2 Jays in trees between the wood and the orchard; 3 Feral Pigeons, 8 Wood Pigeons; 2 Blackbirds, one a black-billed juvenile; 5 Crows and 1 Magpie (for sorrow); small numbers of Great Tits and Blue Tits calling in various locations; 2 Goldfinches and, in the Cliffview back gardens hedge, the usual family of 4 House Sparrows, males outnumbering female by 3:1; and a solitary Ring-necked Parakeet.

PS. Shortly after posting the above, Sue told me she had seen earlier this week "a Sparrowhawk going from HF across Vicars Hill, a Peregrine Falcon going the other way over Algiers Road and a Green Woodpecker on an ash tree near the garden/bothy on Hilly Fields". This is the first Green Woodpecker that we have spotted on Hilly Fields though they can be found quite often in Brockley and Ladywell cemeteries.
Posted by Tom at 12:12 No comments: