Another new bird has been added to the Hilly Fields Bird List - a Spotted Flycatcher, seen by Rachel and Phil on 4 June in the border with Hilly Fields at the end of their garden. We were unsure what it was at first, but sent photos to our friendly expert Conrad (bird champion for Brookmill Park) and he identified it. 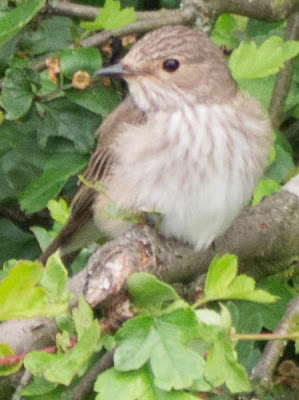 The Spotted Flycatcher is a sparrow-sized summer migrant which arrives here from Africa in late May. Its most distinctive features are brown streaks on the crown, lighter streaks on its grey-white breast and a longish bill. The Collins Guide says: "Numbers have declined in recent years but around 30000 pairs still nest in the UK, favouring open woodland with sunny clearings, parks and gardens.' It is a quiet bird and you are mostly likely to notice it by the distinctive feeding habit from which it gets its name. Perched upright on the branch of a tree, it shoots out to catch an insect in mid-flight, then returns to the branch. 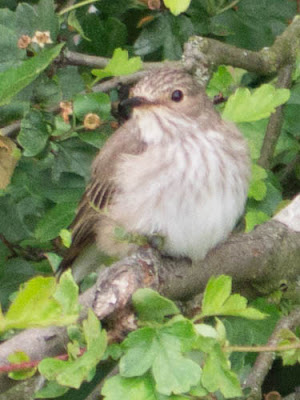 Another 'Spot Fly' was recorded in Ladywell Fields on 19 May and a possible third bird was seen in Brookmill Park on 11 June. It has a low presence in the Greater London area with only six breeding pairs recorded in recent years, so Lewisham has been lucky. All three of the birds stayed for only a day before moving on. This is the second unusual bird Rachel and Phil have seen in their back garden, the other one being a Little Owl last year. It helps to back on to a park, of course, but any garden with trees and plants is 'wildlife-friendly' to some extent and worth keeping an eye on. You never know what might turn up.

The weather was warm enough to bring a few sunbathers out onto the slopes of Hilly Fields on 27th May when we did our monthly bird survey. The birds were vocal but not always visible as the growing foliage makes the 'little brown jobs' (birder talk) difficult to see. We heard plenty of Wrens and Chaffinches, for example, but they were well hidden. One bird we did catch sight of and heard repeatedly was the Blackcap, a migrant warbler which arrives every summer from Africa and the Med (there is a smaller winter migration from Germany). This bird seems to be more widespread in Lewisham than ever and is easy to recognise having a grey-white breast and a black 'cap' (male) or chestnut brown cap (female). 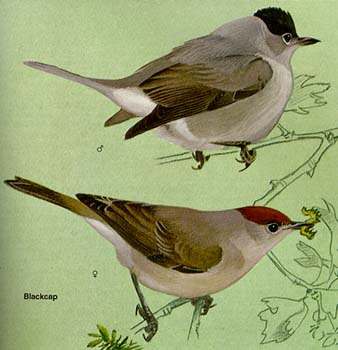 The Blackcap has a cheerful, insistent song which can be heard here.

The other common migrant warbler is the Chiffchaff which we heard on upper Eastern Road. Elsewhere, the clamour of chicks caught our attention in the little grove opposite the bothy. We tracked the sound down to a small number of Blue Tit fledglings who were out of the nest being fed by mum and dad in the upper branches. A Long-tailed Tit was hanging around with them as well. A few House Sparrows were lurking in the Cliffview hedge as usual, a dozen or so Starlings were pecking at the grassland (they usually disappear for a while in summer) while soaring above us in the blue sky was the welcome sight of Swifts - five together at one point. They arrive in the UK in the first half of May after a 4000 mile journey from southern Africa. We also saw or heard 5 Robins, 3 each of Blackbird and Woodpigeon, 2 each of Crow, Great Tit, Magpie and Ring-necked Parakeet and one each of Goldfinch and Greenfinch - 18 species in all.

Meanwhile, in other nature news, the dog and sweet briar roses are appearing in the borders just as the cow parsley and May blossom start to fade. Along with the buttercups, the vetch and plantain in the long grass, these are a sure sign that spring is turning towards summer. 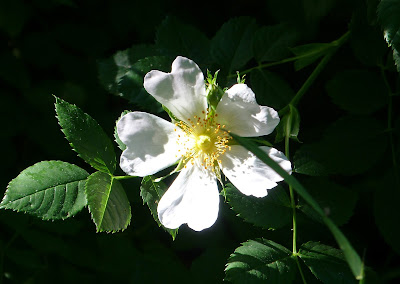