At Home In Our Trees

The big deal during May was to find our Great Spotted Woodpeckers en famille again. We heard the shrill call of young peckers from a tree on the edge of the children's playground and located the nesting hole high up on the trunk. Soon an adult woodpecker appeared with food in its beak and after it had gone, two chicks took turns to peek out from the hole. One can be seen in the photo below. Like all juvenile GSWs, it has a red patch on its head which will disappear in the autumn moult. It's an odd place to choose for breeding purposes, being alongside the busy top path and next to the tennis courts, but Mistle Thrushes have bred in the same tree before. This is the third time in six years that we've come across woodpeckers nesting in the park and it's nice to know our trees are appreciated! 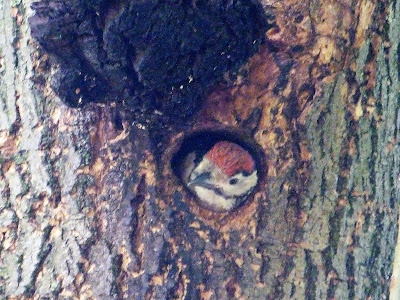 Elsewhere, Blackcaps, Chaffinches, Robins and Wrens were all singing and we also heard a few notes from the Goldcrest and Coal Tit,  Blue tits were quiet, no doubt busy finding caterpillars for their young. A flock of Starlings seemed to follow us around the park, sometimes in the trees, sometimes feeding on the grassland. Sue counted 35 in total.  And over Eastern Road, a Jay harassed a pigeon before settling on a branch to give a clear view of its blue and black wing bars. Interesting to reflect that this colourful bird belongs to the same family as the jet-black Crow and the dark blue and white Magpie. 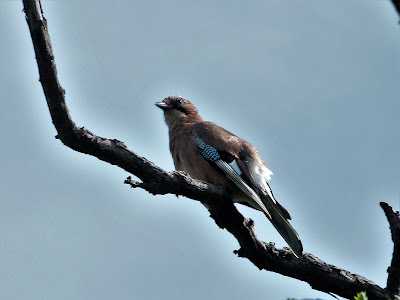 In all, we recorded 19 species during our survey as follows: 35 Starlings, at least 7 Robins and 7 Wrens, 1 Great Spotted Woodpecker and 2 juveniles, 3 Woodpigeons, at least 2 each of Blackbird, Blackcap, Crow, Great Tit, Magpie and Ring-necked Parakeet and 1 each of Blue Tit, Chaffinch, Coal Tit, Feral Pigeon, Goldcrest, Goldfinch, House Sparrow and Jay. Numbers are down a little but, as so often at this time of year, you can't see the birds for the foliage. The little fellow below was no problem to spot however. 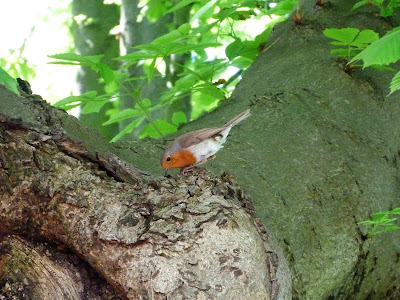 Posted by Tom at 11:52 No comments: Links to this post