Winter on the Way

November 23rd was a quiet and windless autumn day for our monthly bird survey. We heard the Ring-necked Parakeets more than usual, perhaps because they're building up to their breeding season which starts in January, earlier than other birds. They did seem to be checking out an old Ash tree by the school access road which they've nested in before. 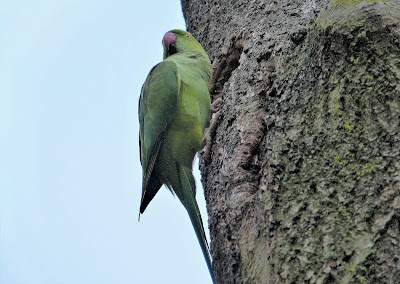 Robins were singing and clicking along our route and we heard the occasional Wren too. The resident family of Blackbirds which hang around the Upper Eastern Road area were very active and one of the male juveniles was foraging in the shrubbery at the back of the school. Maybe because he's still young and less wary, I could get closer to him and the photo below shows the plumage not glossy black yet and the bill still turning orange. 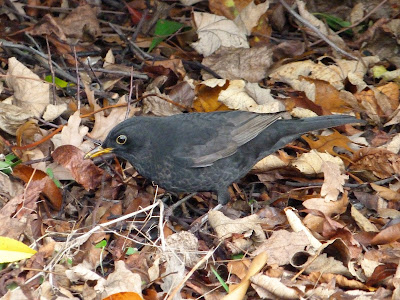 On the north field, we saw a juvenile Pied Wagtail (as per last month) but only four gulls - two Black-headed and two Common - so numbers have still not built up. We also saw a couple of Starlings. Like the gulls, their numbers will increase as winter sets in and they flock to the less exposed inner suburbs. A pair of Mistle Thrushes were in the trees showing their fine speckled breasts. They like the red berries on the nearby Whitebeam. 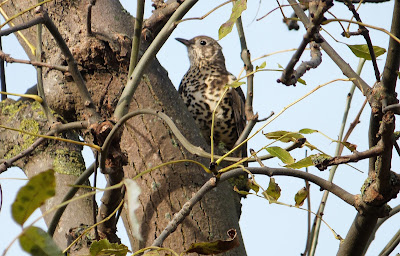 A single House Sparrow could be seen in the Cliffview hedge, but others were chirping nearby. Our final bird before absconding to the cafe was a Blue Tit silhouetted on the Vicars Hill border. In all, we recorded a better-than-expected 18 species: 12 Feral Pigeons, 9 Robins (at least), 7 Blackbirds, 5 Woodpigeons, 4 each of Blue Tit, Crow and Parakeet, 3 Great Tits, 2 each of Black-headed Gull, Common Gull, Goldfinch, Magpie, Mistle Thrush, Starling and Wren, 1 each of House Sparrow, Jay and Pied Wagtail. 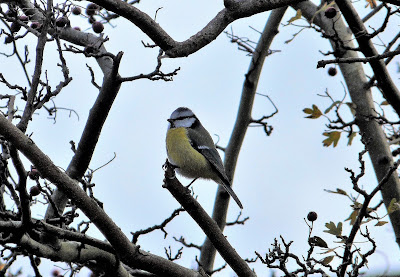 Finally, last month I mentioned the beautiful pink fruits and orange seeds of the Spindle tree near the bothy. One month later, the seeds have all gone, fallen to the ground or eaten by birds, and the lobes of the fruit are darker and decaying. It's autumn still, but winter is on the way. 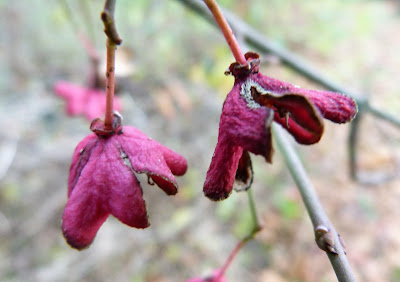