Do They Know It's Christmastime?

Robins were singing here, there, just about everywhere when Sue and I did the monthly bird survey on 16 December. In fact, Robins sing most of the year except for a few weeks in July/August when they skulk in the undergrowth and moult. But in December, the frequency seems to be increasing. Do they know it's Christmastime? Well, of course they don't, despite having their likeness featured on Christmas cards for the last 150 years or more. But they do seem to sense that the year has reached a turning point and that the mating season is not far off. We watched a pair chasing each other around the upper part of Eastern Road and it was hard to tell whether it was territorial defence or early courtship. 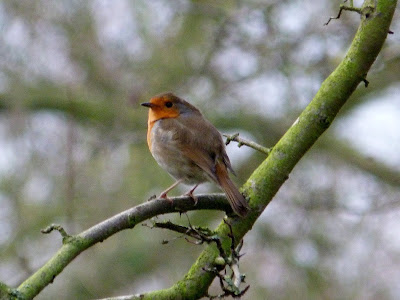 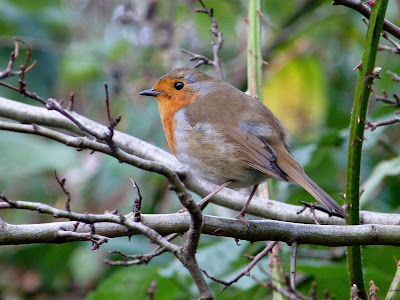 A Song Thrush was singing in the little wood as well, repeating each phrase three or four times. This bird returned to Hilly Fields last year after a long absence but we haven't seen or heard it since last April. It's good to know that it's still around. Another welcome returnee is the Great Spotted Woodpecker which we saw for the first time in six months in the little wood and then later on upper Eastern Road. You can't tell from the angle of my photo (below) but the bird we saw is a female. The male has a red cap, the female doesn't. Both have red 'backsides'. 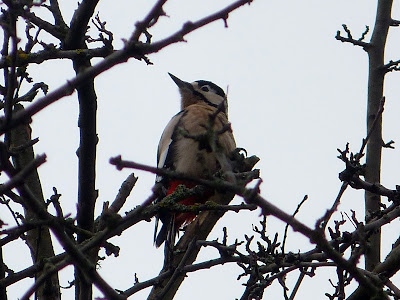 Although numbers are still not high, we saw a much greater range of birds than in recent months - 22 species in all. It was nice to see both a male and female Chaffinch - a bird we haven't come across since summer. And another Goldcrest in the garden next to the bowling green. We seem to be getting better at spotting these tiny birds, though there has been a winter influx of migrants to boost numbers. A Collared Dove was also in the garden - not that common in the park, although I hear one often on the other side of Vicars Hill. If you hear a pigeon cooing three times ('U-ni-ted!), it's a Collared Dove. If you hear a pigeon cooing five times ('How are you to-day?'), it's a Woodpigeon.

Finally, in the mild weather we sat outside at the cafe and had a good view of two Mistle Thrushes in the trees opposite. This is another bird with a Christmas connection in that it gets its name from its fondness for mistletoe berries. I don't think we have any mistletoe on Hilly Fields, but luckily the Mistle Thrush will eat all sorts of other berries (including the red hawthorn berries) and is fond of invertebrates too. In fact, you're most likely to see it on Hilly Fields picking about in the grass for worms. 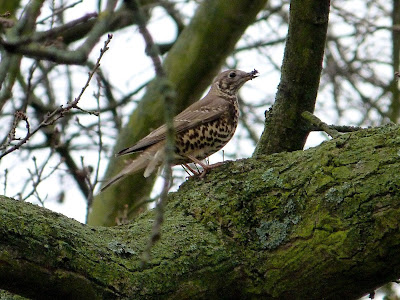 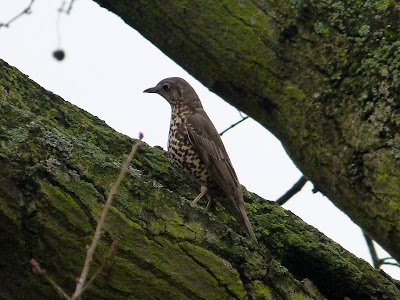 Merry Christmas to all and don't forget that our Big Birdwatch event (in conjunction with the RSPB) will be held on Sunday 31 January from 10.30-12.30. More details in the New Year.
Posted by Tom at 20:13 2 comments: Links to this post