This year's dawn chorus walk on 2 April was blessed with good weather and plenty of birdsong. Sixteen people came along as we walked around the green border of Hilly Fields (seeing the sunrise over lovely Lewisham), through the nature reserve and the upper part of Eastern Road, then down St Cyprian's Passage to the Brockley & Ladywell cemeteries. On Hilly Fields as expected, we heard plenty of Great Tits calling and Robins and Wrens singing, but also the newly arrived Chiffchaffs sending out their sharp, insistent song. And of course we heard the Blackbird which starts singing in the 'darkest hour' before dawn. On top of the hill, a Redwing was seen in the trees, a late-stayer as most of its fellows have returned to Scandinavia. And in front of the school, not only did we see Long-tailed Tits and Starlings but the youngest member of our party was able to show us some excellent pictures of them from her Ladybird Book of Birds. 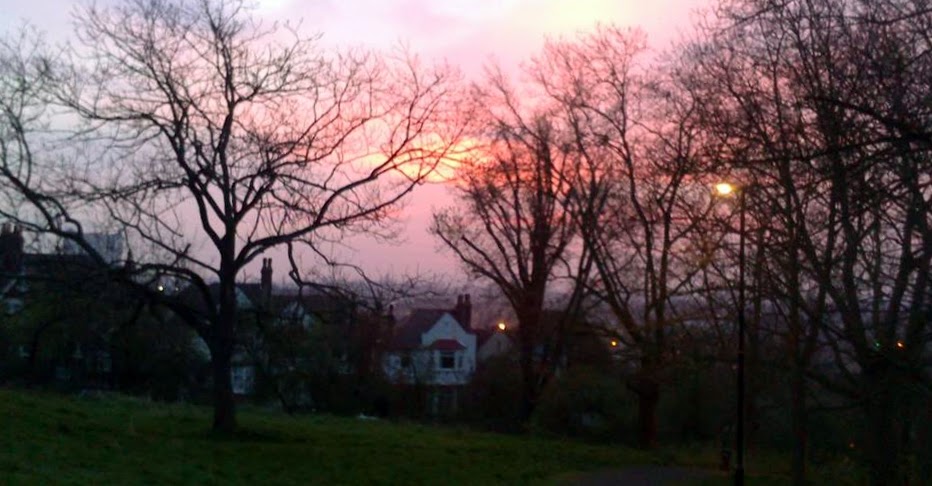 In the cemeteries, the highlight was undoubtedly the Green Woodpecker which was heard almost as soon as we entered. Eventually we found it high in the branches of a tree and I think most people caught at least a glimpse of it. But if it wasn't easy to see, it's laughing call (known as  a 'yaffle' to birders) was very distinct. And amazingly, its cousin a Great Spotted Woodpecker then landed on the same tree, briefly turning it into Woodpecker Central. Further on we heard (and briefly saw) a Song Thrush, again high in a tree, repeating each song phrase several times over as they famously do. We also heard a Greenfinch sneering and, inevitably, a Ring-necked Parakeet.

In all, we saw and/or heard 19 species on our walk: Great Tit, Blue Tit, Long-tailed Tit, Robin, Wren, Chiffchaff, Woodpigeon, House Sparrow, Redwing, Crow, Blackbird, Magpie, Starling, Green Woodpecker, Great Spotted Woodpecker, Song Thrush, Greenfinch, Ring-necked Parakeet and a Mistle Thrush heard singing near the playground as we walked back through Hilly Fields. A good haul and I'm glad that everyone seemed to enjoy the walk. Thanks to Rachel from the Friends of Hilly Fields for publicising it and thanks to the FoBLC and Mike Guilfoyle for enabling early access to the cemeteries.

If you would like a second chance to join a local dawn chorus walk, Lawrence is organising one along the River Pool on Thursday April 17th at 6am, meet outside the Sydenham Sainsbury Savacentre. The River Pool between Bell Green and Catford is one of the natural glories of Lewisham. If we are very lucky, we may catch a glimpse of a Kingfisher or Sparrowhawk, but we should certainly hear Blackcaps, Chiffchaffs, probably a Song Thrush and many other birds. Check here for more details.

Return of the Chiffchaff

Our monthly bird survey on 26 March began well with the sighting of a pair of Jays in the trees along the Veda Road border. It is sometimes hard to believe that these birds with their colourful pink and fawn bodies and bright blue wing patches belong to the same family as the all-black Carrion Crow, but they do - as also do Magpies. Further on we saw a Crow with nesting material in its beak and as we worked our way round the park with Robins, Wrens, Great Tits and Blue Tits singing and calling, it was evident that the birds were busy preparing for the mating season.

In the wood, we heard what I'd been hoping for - the song of a Chiffchaff. This is a small warbler with a pale lemony breast and a white stripe above the eye. It migrates to Britain every spring from the Mediterranean and West Africa. This year it got here just before the Saharan dust! It's only in the last 3 years that we've seen or heard Chiffchaffs on Hilly Fields and only last year that they stayed the whole summer and bred. A few days after the survey, I heard two Chiffchaffs singing and there may be a third somewhere in the trees around the Veda Road/Eastern Road back gardens. Their song is very distinctive and easy to remember. Here's a clip I posted on the blog last year


In the trees at the back of the tennis courts, we had some good views of a Great Spotted Woodpecker and later Judith saw a Mistle Thrush on the grass in front of the courts. There was no sign of any gulls - the mild weather has presumably tempted them back to the coasts. Next to the bothy, some sort of territorial skirmish was going on between a plucky little House Sparrow and two Blackbirds. Here's one of the latter peeping out rather cautiously from a bush: 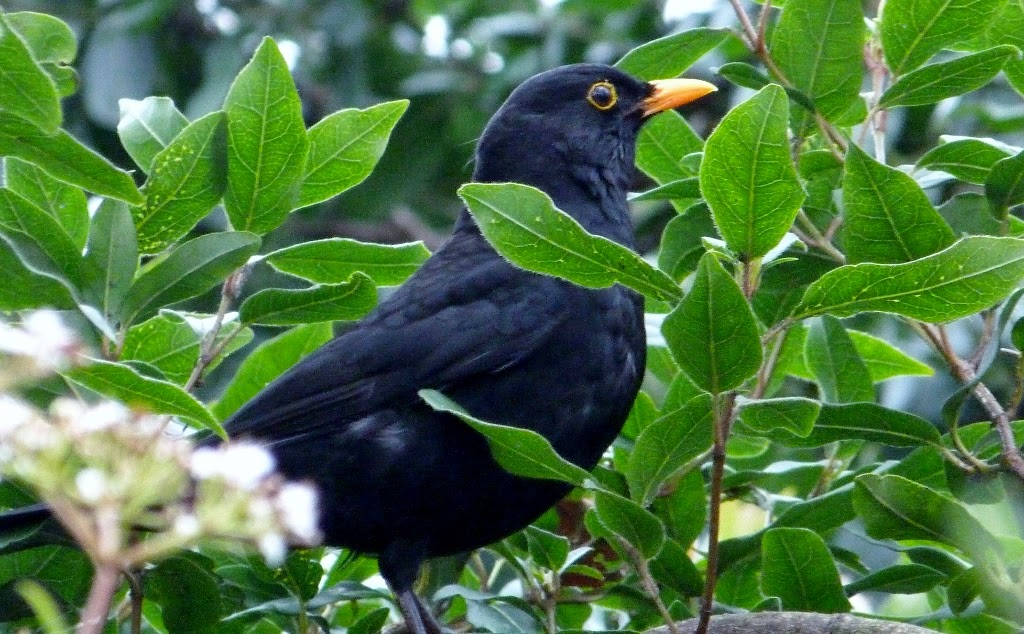 In total, we saw and/or heard 19 different species. As well as those already mentioned, these include no less than 25 Feral Pigeons on the cricket pitch observed by Sue on her way home, 11 Starlings, 4 Woodpigeons, 2 Magpies, Goldfinches and Ring-necked Parakeets, a singing Dunnock and a solitary Long-tailed Tit. All in your local green space on a fine spring morning. I'll update on the Dawn Chorus Walk in a few days...