In view of the Xmas festivities, Sue and I brought our survey of Hilly Fields bird life forward this month and walked around the park on 19th December - a grey, chilly Monday morning which ended in rain. Despite these conditions, it was worthwhile in terms of the range of species seen.

Winter has brought more gulls inland and Hilly Fields had both Black-headed and Common Gulls in small mixed flocks. The simplest way of telling these two apart (given that the Black-headed gull has a white head at this time of year!) is by the colour of legs and bill: red = Black-headed Gull, yellow = Common Gull. If you can't make out the colours, then the Common Gull has a darker back, is slightly larger and  seems to hold itself more erect when walking on the ground. It also lacks the black mark behind the eye which is an easy winter identifier of the Black-headed Gull.


The Starlings have grown in number since last month - there were at least fifty moving around the park today. We also saw a dozen Crows descend on a tree on the border of the Stones field - not quite enough for a "Parliament" (one of the collective names for Crows), more like a Select Committee. We also caught sight of that colourful corvid, the Jay - one at first in the wood and then two in the trees around the tennis courts and briefly on the ground hopping forward in slow deliberate fashion.

The upper part of Eastern Road was so alive with birds that it was difficult to keep track. The family of Blackbirds was there again (see 1 November post), along with Great Tits, Blue Tits, Goldfinches, Greenfinches and Chaffinches. From time to time, the finches swooped down to drink from the gutter which is, in effect, their watering trough. Most rewarding of all was a pair of Nuthatches, heard and then seen in the trees and even perched on a lamppost. It was unusual to find them close to the centre of the park as previous sightings have been on the eastern edge and in the adjoining Cliffview back gardens (see 15 July post).

Also recorded were a Great Spotted Woodpecker (seen flying overhead by Sue), several singing Robins, Magpies, one or two Ring-necked Parakeets, four House Sparrows in the Cliffview hedge (as usual), a resurgence of Woodpigeons (19 in total) and a few Feral Pigeons. Oh - and not forgetting the Mistle Thrush perched high in a tree on the Stones field border and driven off at one point by a smaller bird - probably a Great Tit. It flew to another tree further along and was heard to emit a few feeble phrases of song, almost as if it was too much trouble.

By contrast, a Wren burst briefly into full-blooded melody near Eastern Road - "a cascade of notes...ending with a loud and distinctive trill" as my RSPB Handbook puts it. And a Great Tit gave

a warming-up performance of it's famous two note song. It never sounds to me like "teacher teacher", but that's how the bird books describe it. And it will drive us all mad in the weeks and months to come.

Posted by Tom at 09:08 No comments: Links to this post

Sue and I did another bird survey on Hilly Fields yesterday. It was a fine, sunny morning and fairly calm after the heavy winds of the previous day. So calm, in fact, that we saw little at first, but patience is a necessity when bird watching and eventually our feathered friends started to reveal themselves.

One of the best spots we found was the upper half of Eastern Road - the road which leads to  Prendergast School and the playground. During term time, this usually becomes an overflow car park for school staff, but thanks to the public sector strike, we had it to ourselves! Here - as well as Great Tits, Goldfinches and Chaffinches - we saw and/or heard:
We were also briefly distracted by a Red Admiral butterfly, flitting about and perching on the bushes. It's not uncommon to see them still flying in November, though this is quite a late appearance and possibly the last we'll see this year. 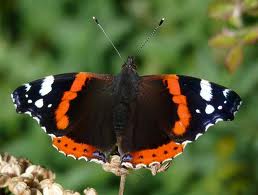 Elsewhere, we saw and/or heard:
Finally, just as we were about to depart at the top gate on Vicars Hill, Sue spotted a Mistle Thrush which flew into the park and perched in a tree. A beautifully speckled bird, it sang for us after a while, albeit rather mournfully. It was a very pleasing end to our walk. 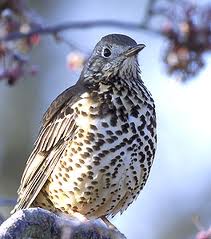 Posted by Tom at 22:31 No comments: Links to this post