September was a difficult month to organise a bird survey as the Hilly Fields bird champions slipped away on holiday at various times. It was in any case a quiet month for bird activity on the whole (as it was last year) for various reasons including the fact that some birds are still moulting, that the mighty effort of attracting mates and finding food for the young is over and that the need to defend territory is not quite so important. There is also a lull before the hordes of winter migrants arrive and before some non-migrant birds such as starlings and gulls return to the inner city. I did a walkabout one overcast morning and counted only 10 species, all of them common birds. However Sue had much better luck on the very last day of September and found 16 species including a Sparrowhawk and a Willow Warbler, so naturally we are recording that as our main survey of the month!

The Sparrowhawk was soaring for some time over the south field adjoining Eastern Rd and Adelaide Ave and was probably hunting. It disappeared eventually in the direction of Brockley and Ladywell Cemeteries. The Willow Warbler is the first to be recorded on Hilly Fields, pushing our grand total since 2007 up to 42 different species. They are summer migrants and not uncommon in Lewisham, so I suspect it has visited the site before but not been detected. Its appearance is very similar to that of the Chiffchaff, although its song is quite different. Once it stops singing as most birds do around July, the observer has to try and make out 'paler legs, longer wings, slightly longer body,cleaner yellow underparts, clearer stripe above eye' (RSPB Handbook). Luckily, in this case, the bird was at eye level on a bush between the park and the Veda Rd back gardens and Sue could identify it fairly easily. By now, it will be well on its way back to West Africa. Let's hope it stops by again next year.

In addition to those already mentioned, Sue also recorded 8 Woodpigeons, 6 Blue Tits, 5 of Long-tailed Tit, Goldfinch and Robin, 4 of Blackbird, Great Tit and Ring-necked Parakeet, 3 of Crow, Feral Pigeon and Magpie and 1 each of House Sparrow, Chiffchaff and Goldcrest. Looking ahead, winter migrants are already starting to arrive in the UK and those that we're most likely to see on Hilly Fields are Redwings and Fieldfares, as well as - we hope - a few wintering Blackcaps from Central Europe. The Black-headed and Common Gulls should be moving inland and arriving late October. The Fieldfare which often goes around with Redwings (both being members of the Thrush family) is a handsome bird which I particularly hope to see again as we spotted only a small number last winter.

Finally, a date for your diaries - 20 October. The Green Fair is coming! Lots of fantastic activities as listed below and some may even involve birds. Do come along and join in. 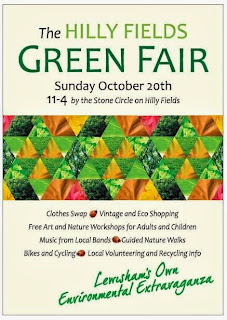 Footnote 1: I almost forgot to mention that a Tawny Owl was heard again during the month in the Eastern Rd area. No further information as yet but it was heard last year from September through to January, so a consistent pattern may be emerging. Please let us know via the comments facility if you hear it.