Predators in the Park

Some interesting news has turned up via the Comments column in my previous post. Gavin reports seeing a Short-eared Owl over Hilly Fields on 13 October last year. It was being mobbed by crows at the time and after a few minutes drifted away eastward without landing. Earlier that day, the same bird had been seen over the London Wetland Centre near Barnes where it was being mobbed by gulls. Just one of the perils of being a day-flying owl. We can be reasonably sure it was the same bird in both places as Short-eared Owls are quite scarce in London. Meanwhile, the Tawny Owl that we've mentioned in earlier posts has not been heard since mid-December, but as one correspondent pointed out, local residents tend to have their double-glazed windows firmly shut at this time of year. All owls are predators and prey on other birds as well as small mammals, which accounts for the preemptive mobbing. In this pic, a Short-eared Owl is about to make short work of a vole.

'Hilly' reports seeing a probable Sparrowhawk yesterday in the cherry tree by the Bothy. Sparrowhawks have nested in Brockley Cemetery for at least the last two years and sightings are reported from time to time.  See the blog post for 7 September 2008 by Keith for a record of his close encounter with a Sparrowhawk. Interestingly, when Keith started this blog back in 2007, he reported seeing quite large numbers of House Sparrows on the Cliffview side of the park, as many as 50 on one occasion. Nowadays, the most we see is 8. I wonder where they can all have gone? Unfortunately, "gardens have become one of their favourite killing fields" says Mark Cocker of the Sparrowhawk in his excellent book Birds Britannica. He notes also that they eat a wide range of birds "from the smaller members of the tit family to black grouse". Perhaps we could interest them in parakeets... 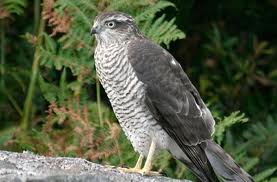 The other predator seen over Hilly Fields is the Kestrel. Sue recalls watching them nest and breed in the school building back in the 1980s (before it became Prendergast), but they are not quite so common around the park now. Only one sighting in 2012 as far as I know. The Kestrel is famous for hovering in one spot, almost standing still in mid-air while it searches the ground for prey. It does take small birds and chicks, but mice and voles are preferred. Keith (again) stumbled across one back in 2008 tearing apart what was probably a mouse at the edge of the meadow and got this photo of it standing over its prey. 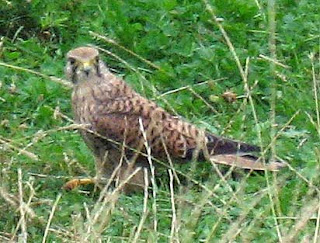 So there we are - it's a bird-eat-bird world out there, sometimes. But at least their food chain gives birds of prey one big advantage over us. They always know what they're eating.