30 June: starting as usual from the lower Vicar's Hill entrance, Sue and I worked our way along the Veda Road border, following 'the secret path' (as children call it) between tall grass and cow parsley. It was very quiet in the trees, reflecting the fact that for most birds the breeding season is drawing towards a close. Around the wood, however, and the upper Eastern Road area, a Blackcap and two Chiffchaffs were singing continuously, so for them it's not all over yet. The RSPB says of both these species that 'pairs nesting in the south of England' may have a second brood. Perhaps the singing birds were keeping in touch with each other, either from the nest or from wherever they happened to be searching for food. We also saw a Pied Wagtail looking for insects in the grass among the ancient boulders of the stone circle 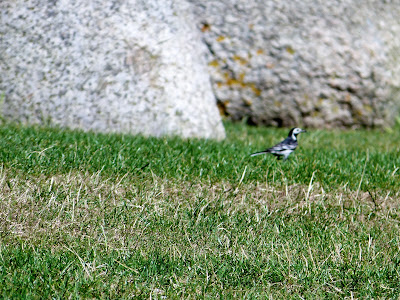 But we weren't finding very much and were reconciling ourselves to a low count when we entered the 'shade garden' between the bowling green and the bothy. There, within a few minutes, we had a remarkable haul: a Nuthatch, a Jay, a Great Spotted Woodpecker, a Mistle Thrush and a family of 8 very lively Long-tailed Tits, most of them recently fledged little 'uns. At one point, it felt as if we'd stepped into a Disney film as the cute tweeting Tits raced around the trunk of a conifer tree. The Nuthatch is not a common visitor to Hilly Fields so it was great to see one again. It is the only British bird that can climb down a tree trunk head first in its search for insects within the bark.

This raised our total to a respectable 19. In addition to those birds already mentioned, we saw and/or heard 4 Robins and 4 Wrens, 3 Blackbirds, 2 each of Swift, Collared Dove, Woodpigeon, Magpie and 1 each of Blue Tit, Crow, Great Tit and House Sparrow. So the everyday birds were scarce but the less common birds made up for it. And, for once, we didn't see or hear a single parakeet. What a shame.
Posted by Tom at 13:13 No comments: Links to this post