We had a busy two days at the end of March. On Wednesday 30th, we carried out our monthly bird survey of the park. On Thursday 31st, we set our alarms for the annual Dawn Chorus Walk. The monthly survey was most notable for our first hearing this year of a Chiffchaff - a small spring warbler often quite hard to see in the trees but with a distinctive song of staccato notes. These little birds fly here every spring from the Med and North Africa in order to breed in our cooler climate.


We saw the female Great Spotted Woodpecker again and enjoyed watching 3 Goldcrests flitting among trees in the garden next to the bowling green. Judith played their song on her phone app, as a result of which the birds hung around for some time wondering where this additional bird was! The Goldcrest is Britain's smallest bird and seems to be increasingly common, though its numbers are swollen by winter migrants from Northern Europe. It gets its name from the stripe on its crest which is orange in the male and yellow in the female.

We were pleased to see one of our Mistle Thrushes too, hopping about on the grass bank behind the tennis courts. These are bold birds who are not too bothered by humans and can hold their own against bigger species. I saw the resident pair chasing a Crow away from a favourite tree not long ago. We counted 19 species in total including 8 Robins, 7 Wrens, 5 each of Starling and Woodpigeon, 4 Blue Tits, 3 each of Blackbird, Great Tit and House Sparrow, 2 each of Crow, Chaffinch, Dunnock, Long-tailed Tit, Magpie and Ring-necked Parakeet and a solitary Goldfinch. 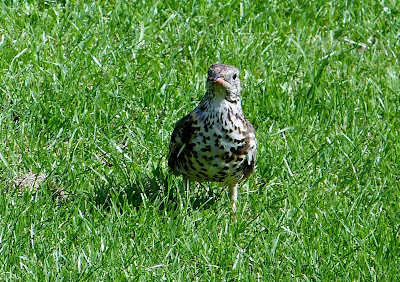 Thursday 31st March turned out to be warm and windless and we were pleased that 18 people turned out for the 6 am start. For those who didn't, this is what it looks like. At least there was a promising glow in the east... 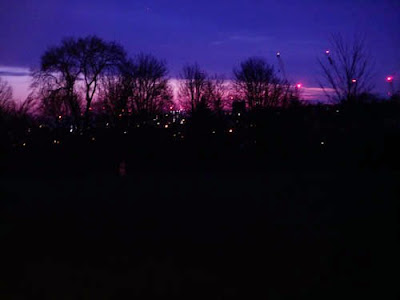 The birds were quiet at times, but we heard a Song Thrush singing for the first time this year as well as most of the regulars - Blackbirds, a Chaffinch, Dunnocks, Robins and Wrens. We heard the drumming of a Great Spotted Woodpecker and had excellent views of it in a tree near the school, but once again it was the female. Where is the male? Hopefully, he'll turn up before it's too late.

As usual, we went on to the Brockley and Ladywell Cemeteries, seeing en route a Parakeet popping in and out of its nesting hole in one of the lime trees on Adelaide Avenue. Dawn was over by the time we were in  the cemeteries, but the chorus was ongoing and we had excellent views of a Green Woodpecker on one of the headstones, as well as briefly of a Sparrowhawk and a Greenfinch. We heard a Chiffchaff singing, two Stock Doves calling and towards the end some Goldcrests along the avenue of yew trees. Hilly Fields shares some of its bird life with the cemeteries - Jays, Song Thrushes and their Green Woodpeckers sometimes pop over - so it was good to see what was going on there.

Thanks to Mike Guilfoyle of the Friends of Brockley and Ladywell Cemeteries for giving us access and to Phil Laurie for sharing his knowledge of the birds there. Thanks to Rachel for helping publicise the Dawn Chorus event, to Sue and Conrad who kept records and to everyone who turned up! 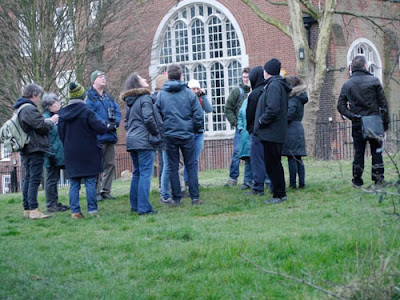 Posted by Tom at 20:02 No comments: Links to this post