This year's Hilly Fields Big Birdwatch organised by the Friends of Hilly Fields will be held on Sunday 25 January from 10.30-12.30. This is part of the RSPB's national Big Garden Birdwatch event which takes place that weekend. The final tally of birds seen during our event will be submitted to the RSPB. 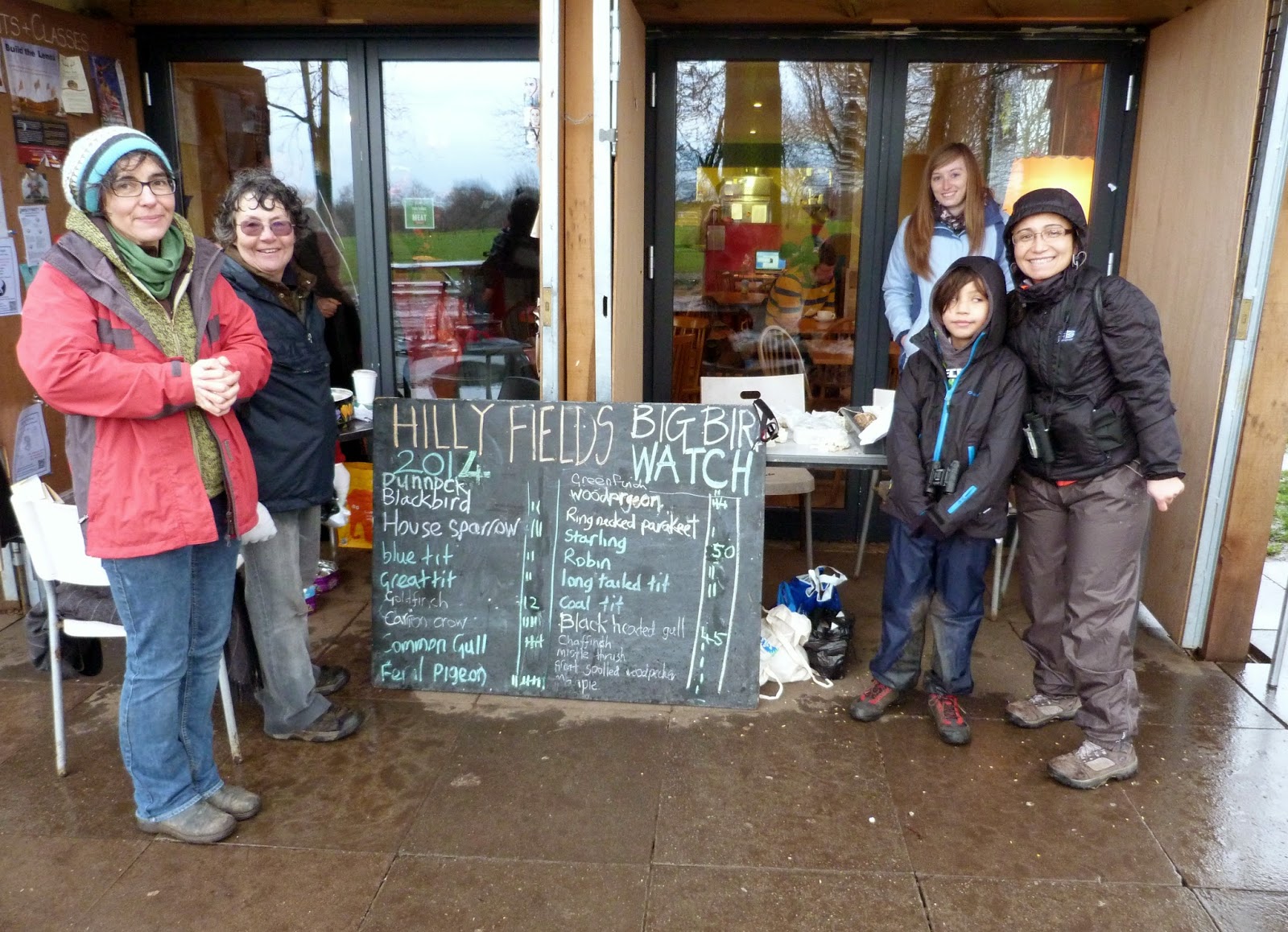 We will have our stall outside the cafe as usual and will issue free sheets illustrating most of the birds likely to be seen. You can go round the park by yourselves or join the guided walk from 11.00-12.00. If you go round by yourselves, please remember the RSPB's golden rules:

(i) only count the maximum number of each species that you see at any one time (to avoid duplication); (ii) don't count birds that fly over without stopping - only birds within the park.

Please bring binoculars if you can (though not essential) and a pen or pencil. 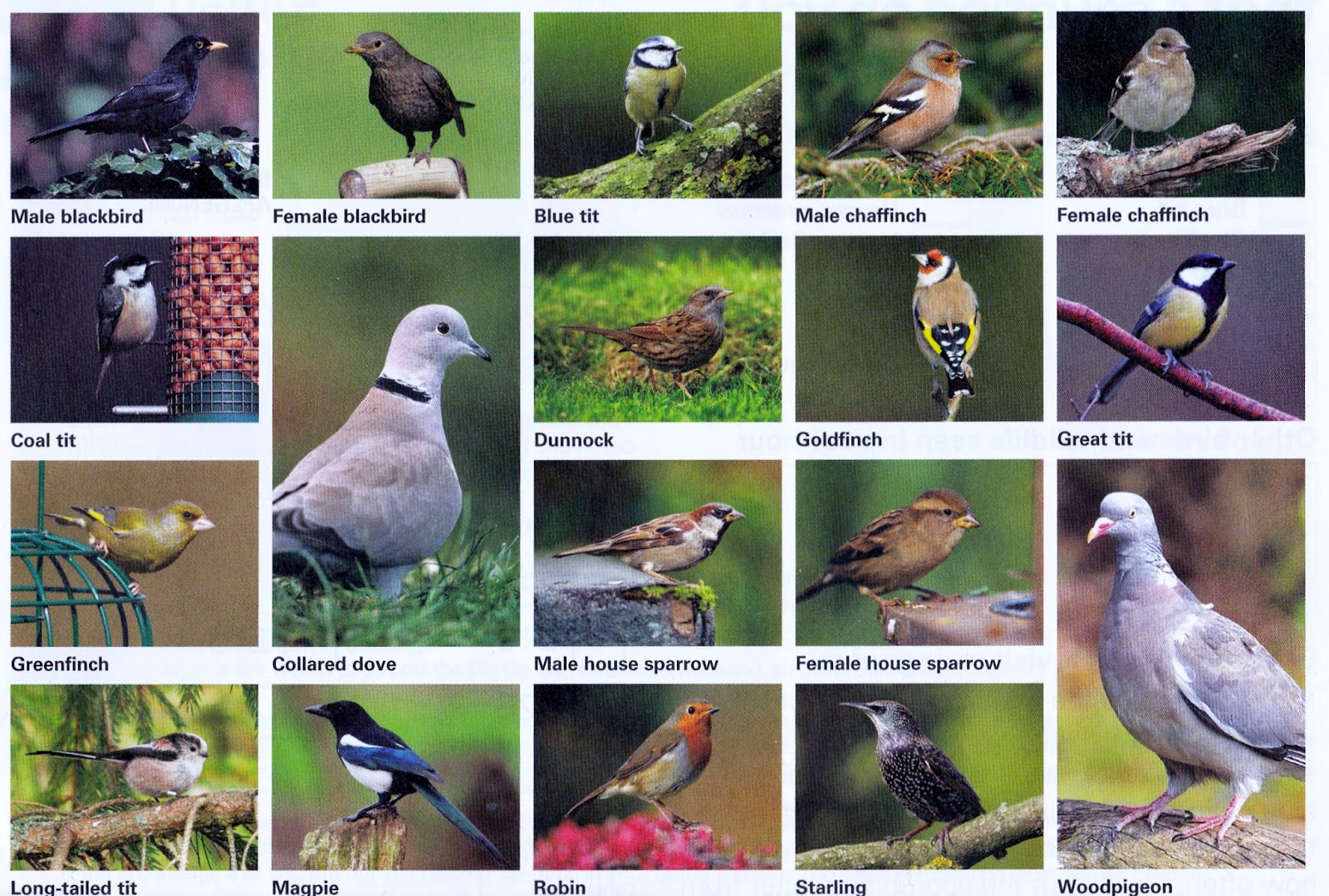 Children are welcome and at the stall will be able to make bird feeders and fat balls which will be hung on trees in the park to help the birds this winter. Children are also welcome on the guided walk. In addition, the Bird Champion Quiz will be available - ten questions which will test your knowledge of avian matters or add to it. The quiz is more about references to birds in folklore and popular culture than obscure ornithological stuff and is graded 'moderately fiendish'. 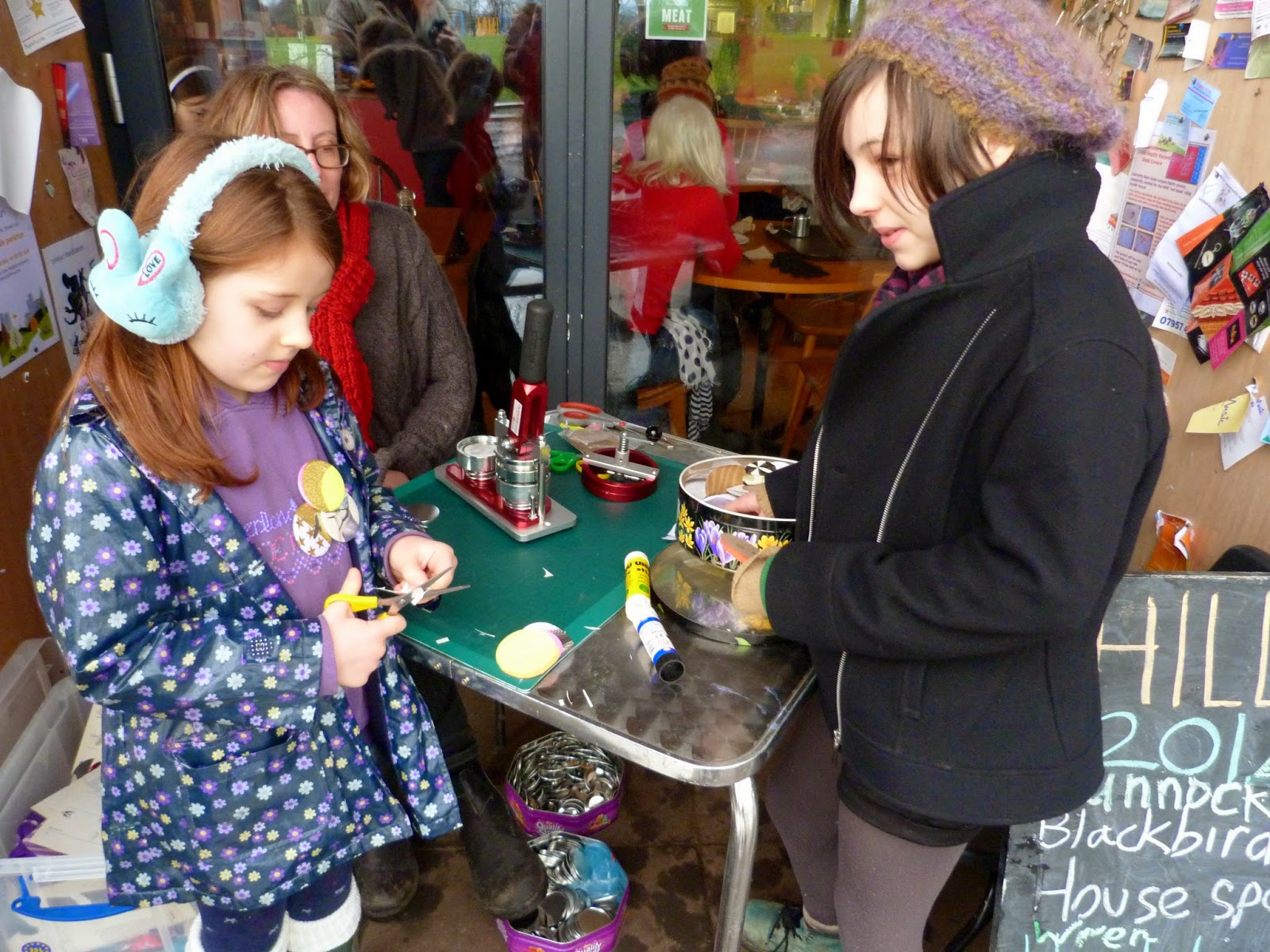 Our Birdwatch will go ahead whatever the weather and as well as being fun for all the family is part of a nationwide event that contributes to our knowledge and understanding of birds and their conservation. Please come and join in.

Here is our updated list of birds seen in Hilly Fields since the Bird Champion scheme began in 2007:

The Case of the Leucistic Crows

18 December: three days before the winter solstice. After a mild start, the south west wind got stronger and the morning colder as we walked around on our monthly survey.  The birds however seem to sense that the year is on the turn and the small birds in particular were more active and vocal. The day before on Ladywell Fields, we had heard both Song and Mistle Thrush singing. On Hilly Fields, more prosaically, we heard for the first time since summer the two note 'song' of the Great Tit - always a sign that bird brains are instinctively starting to think about procreation.

By the orchard we saw two leucistic Crows which Symon had told us about. Leucism is a condition affecting animal cells which drains colour from part or all of their coats or plumage, turning it white. Albinism is a similar complaint except that only the melanin cells are affected and the white of the albino can sometimes have a yellowish tinge. Also, in leucistic animals, the eyes retain their normal colour whilst in albino animals, the eye is red or pink. The two affected Crows are usually in the tall trees by the Veda Road border and Symon has spent several weeks luring them down to the stone circle with tidbits of food and taking photographs. As you can see, only small parts of their plumage are affected although the condition is more noticeable when they spread their wings. 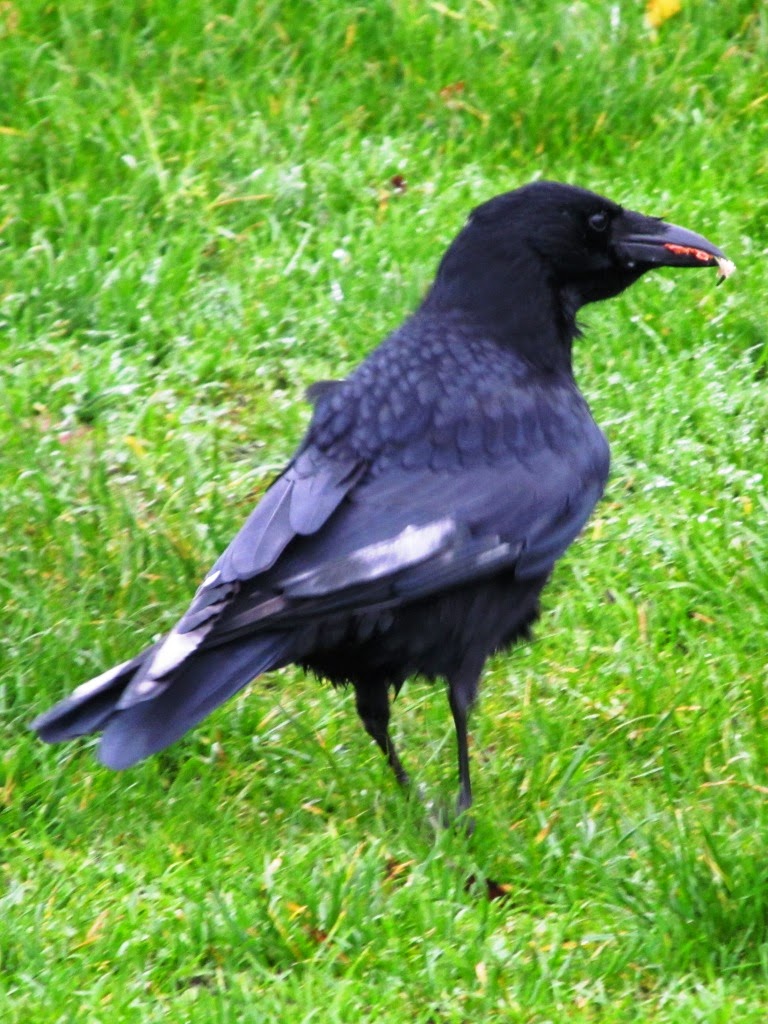 On Upper Eastern Road, we saw a flock of Greenfinches sitting quietly in the trees - at least 8, an unusual number for Hilly Fields. A large flock of 30 or more Starlings were whistling noisily on the south slopes while in the north field around the cricket pitch, we counted at least 60 Black-headed Gulls with a couple of Common Gulls amongst them. These high numbers are another sign that winter is on the way. Not only do birds like these move inland for greater warmth, but flocks can be swollen by migrants as well. Just after the bothy, we caught a brief glimpse of Britain's smallest bird, the Goldcrest - the first for some time on HF - and in the Cliffview hedge were no less than 14 House Sparrows. 2014 seems to have been a baby boom year for them.

The rest of the roll-call: 10 Feral Pigeons, 7 Robins, 7 Woodpigeons, 4 Crows, 4 Ring-necked Parakeets, 3 Blue Tits, 2 Blackbirds, 2 Magpies and one each of Goldfinch, Great Spotted Woodpecker, Jay, Mistle Thrush and Wren making a thoroughly decent total of 20 species in all. And finally this seems like a good moment to announce the forthcoming Big Birdwatch event on Sunday 25 January from 10.30-12.30. This is the weekend of the RSPB's nationwide Big Garden Birdwatch and we treat Hilly Fields as our Big Garden. Our stall will be outside the Cafe as usual and we will offer activities for children as well as a guided bird spotting walk at 11.00 am. More details will be circulated via the Hilly Fields Facebook page and the Friends of Hilly Fields website. Hope to see you there! 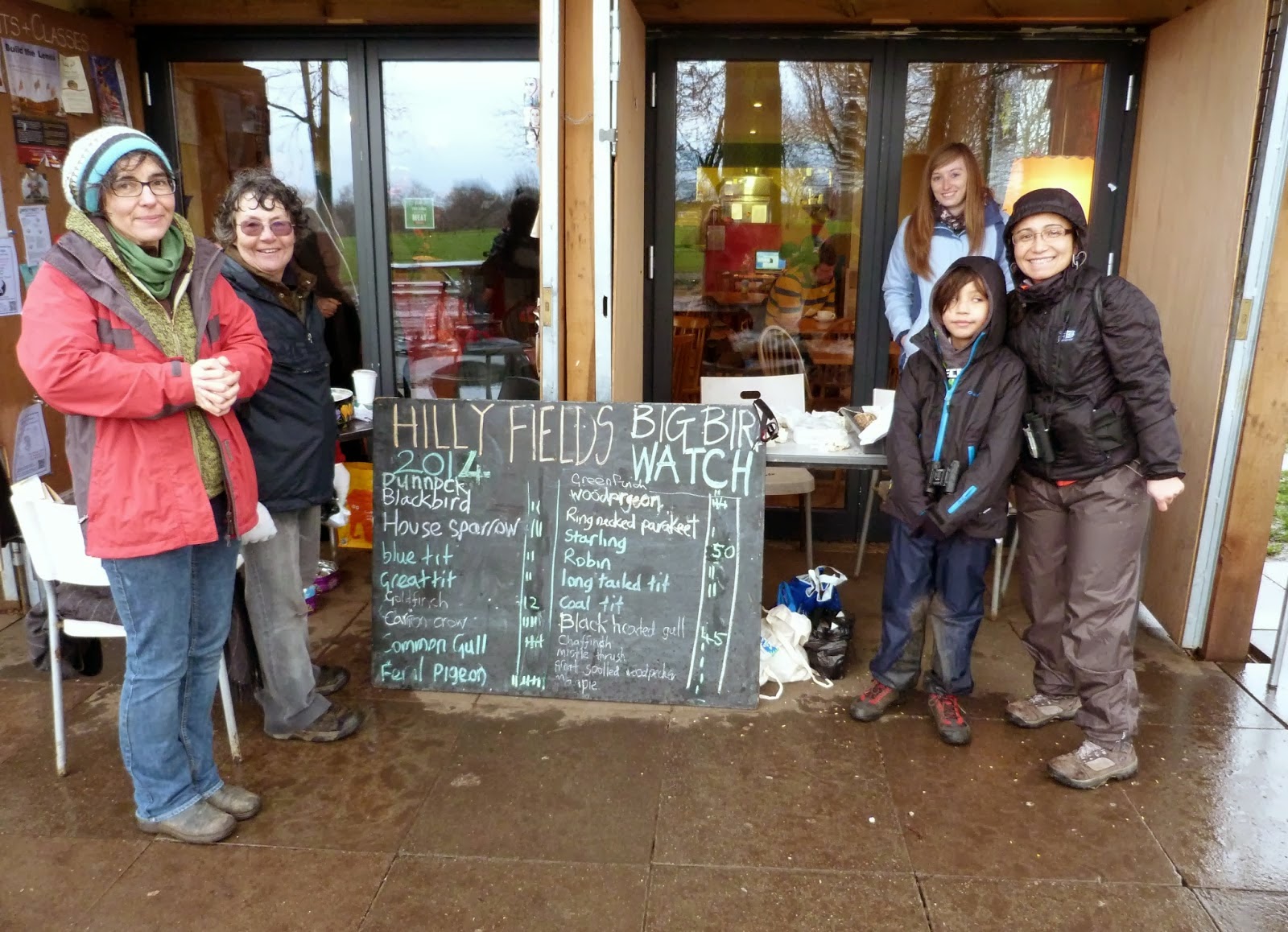