We were so lucky with the weather being dry, bright and sunny with little wind.  However, it was only just above zero.  Last year's 20 species record was not beaten, but we did sight three species not recorded in Hilly Fields for over 2 years (see below).
There were a good number of visitors and I took parties of five or six at a time around the park to see what we could find. 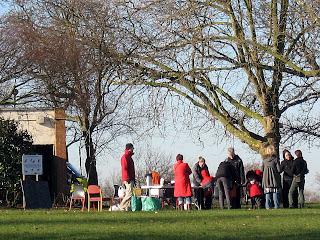 I was quite surprised not to find any birds at all in the South Field, Meadow or West Field (compared with two days ago) and very few around School area.  Sports were being played in the North Field so none were spotted there either.  The vast majority were to the south of the Stones Field and east of the East Field (i.e. along the Cliffview Road hedge).
This is the result:

[Correction on 01/02/2010: The Dunnock was previously omitted from this list (my error), and today I've seen one in my garden, a mere 50m from where we spotted it on Saturday.] 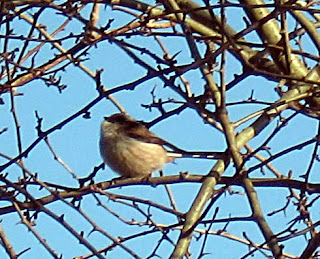 Long-tailed Tit
We are all indebted to Vicki Wheeler, Nature Conservation Officer, for organizing the event - especially the tea, coffee and biscuits which were certainly needed after wandering around the park in such cold weather.  With Vicki's help, our younger visitors made birdfeeders from pots, lard and birdseed to take home and hang up in their own gardens.
Posted by Keith64 at 14:31 2 comments: Links to this post

A Murmuration of Starlings 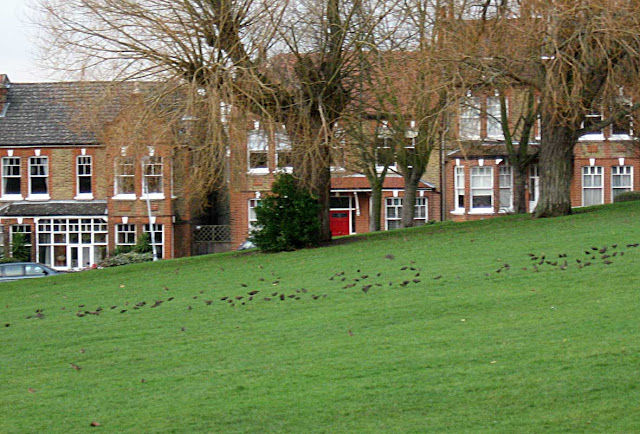 Sorry for the poor quality, but here's a photo of about 150 Starlings and Redwing.

How many will you see during Saturday's Birdwatch?
Posted by Keith64 at 16:11 1 comment: Links to this post

There's a noticable change to the park as you walk along the Cliffview Road side of the park because the trimming of the boundary hedge down to a metre or so is continuing. 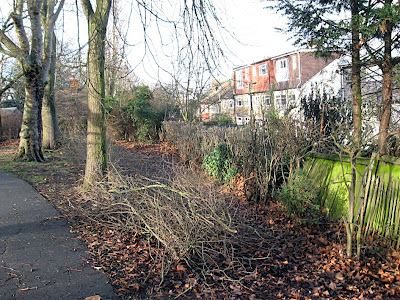 This must make a huge difference to the amount of light those houses receive in the afternoon.

I'm also happy to report that we now have a new supply of birdfood. The feeder was filled sometime during the last week, for which the birds and I are grateful and Vicki (Nature Conservation Officer) supplied more feed yesterday. 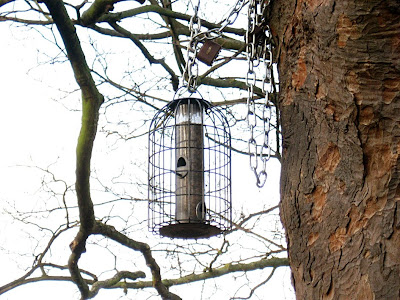 The feed we've used to date was black sunflower seed, but the feeder in the quiet garden has been filled with a birdseed mixture, probably one of the no-mess mixtures. It'll be interesting to see if that attracts more birds than black sunflower seed alone.

In response to Hilly’s comment [see Brisk Walk, 1 Jan] about 20 mid-brown birds, larger than a sparrow and smaller than a thrush, pecking at the grass: my guess would be either Redwing or Fieldfare.

Both are common winter visitors, both flock, both eat worms, both are brown-ish.

The Redwing is midway between House Sparrow and Mistle Thrush in size, whereas the Fieldfare is nearer to the Mistle Thrush. 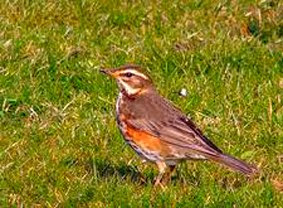 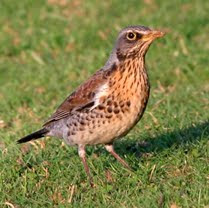 My money is on the Redwing [top pic] because its red underwing patch could be hard to see without binoculars, whereas the grey head and black tail of the Fieldfare would probably be more obvious.
Posted by Keith64 at 17:46 No comments: Links to this post

Had a brisk walk in the park before lunch and saw:

The wind was cold and reached every part of the park, so I didn't linger.
Posted by Keith64 at 20:55 2 comments: Links to this post

Well, there's another Christmas behind us. This was no less hectic than previous. Some would say it's my own fault for marrying into a regular cycle of Christmas, wedding anniversary, wife's birthday and New Year all one week but, to be honest, it is a great week.

Miraculously I did find some quality time in Hilly Fields too, on Boxing Day. Sadly, not many birds did, just the usual smattering of sparrows, crows, woodpigeon, blue tit and magpie plus several starlings, some of which were occupying nests near the tennis courts.

Please note that the next RSPB Big Garden Birdwatch will take place the last weekend of January and we will be in Hilly Fields on Saturday 30th January from 11am with activities for everyone
Posted by Keith64 at 01:35 No comments: Links to this post