We started our September bird survey from the lower Vicars Hill entrance as usual and soon encountered that legendary species, the Little Brown Job - a term used by birders for any small, nondescript, briefly glimpsed bird that can't be identified. We heard a short snatch of song that sounded vaguely familiar, then saw our suspect flitting high in the trees on the Veda Road border, hidden most of the time by trunks or branches or foliage. It had no clear distinguishing features and after a few minutes of craning our necks, we gave up. It was most likely to have been the juvenile Blackcap that we saw last month, but we couldn't be sure enough to count it. A little further along the trail, we saw another bird high in a tree looking down at us disapprovingly. We had no trouble identifying this one. 'Twas our old 'frenemy', the Ring-necked Parakeet. 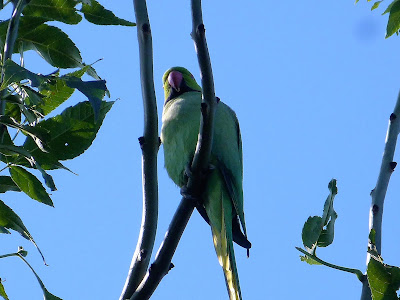 It was 21st September, a lovely morning and the last day of summer. Robins and Wrens sang frequently and Speckled Wood butterflies fluttered around the margins of the wood, making the most of the sun. We saw three Goldfinches and heard more twittering in the background. Then we came across another oddity on Upper Eastern Road. Flopped unmoving on a branch, grey with an oddly distorted face, it was clearly a pigeon or dove, but which variety?  Eventually, we realised it was a juvenile Woodpigeon lacking the white collar of the adult and with swellings around the mouth. In all probability, it was suffering from trichomonosis or 'canker', a disease affecting various bird species which blocks the gullet and leads ultimately to death from starvation. There was little we could do other than move on. I don't recall seeing the disease before on Hilly Fields and there were 18 healthy Woodpigeons feeding on the grass nearby. 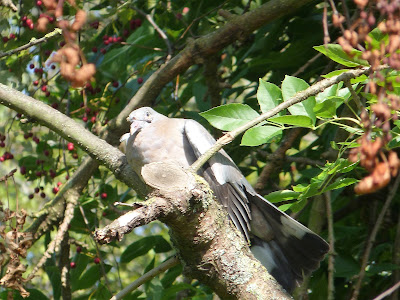 Elsewhere, we saw 5 Crows, 3 Magpies, 3 House Sparrows, 2 each of Blackbird, Blue Tit and Feral Pigeon and 1 each of Goldcrest and Great Tit. We estimated at least 12 Robins present and at least 7 Wrens as well as the other birds mentioned above - 13 species in all. And some definite signs of autumn: leaves starting to carpet the grassland, red berries on the hawthorns and squirrels leaping through the trees and scurrying up and down trunks, gathering nuts for winter storage. 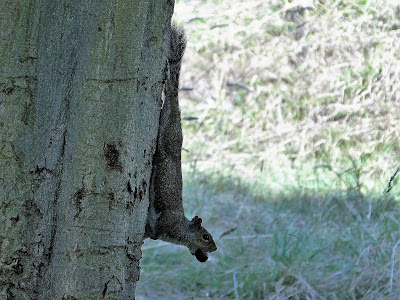