Big Garden Birdwatch: How Do We Compare?

The RSPB has published the results of its national Bird Garden Birdwatch survey, held over the weekend of 28/29 January 2012. We held our own "big garden" survey on Hilly Fields on 29 January and a total of 23 species was identified by all who took part. It is interesting to compare the top 23 birds in the national survey with our list:

There is a 73% match between the two lists, so - as you might expect - Hilly Fields does not differ enormously as a bird habitat from gardens and parks across the UK. Our list is skewed slightly by the winter timing of the survey when there are flocks of gulls on Hilly Fields and the Starling population is at its height. There also seems to have been a larger number of House Sparrows on HF that day than usual (16 were counted - the norm is between 4 and 8).


The six birds which are on our list but not in the national Top 23 are: Black-headed Gull (a very common winter bird in London), Great Spotted Woodpecker (no. 24 on the national list!), Jay, Mistle Thrush, Pied Wagtail and Ring-necked Parakeet. The pesky Parakeet is still predominantly a Southern England bird and, in London, most common south of the river.

The six birds which are in the national Top 23 but not on our list are: Bullfinch, Coal Tit, Collared Dove, Jackdaw, Pheasant and Song Thrush. These can all be seen in the London area with varying degrees of frequency. Locally, Song Thrushes can be seen/heard in Brockley Cemetery and Brookmill Park, Jackdaws in Greenwich Park (when not closed for the Olympics) and I've seen a Collared Dove on top of a bus shelter in Hilly Fields Crescent but forgot to record the date!

The national RSPB survey has drawn attention to the 79% decline in Starling numbers recorded since the Big Garden Birdwatch began in 1979. In fact, both the House Sparrow and the Starling - despite still being the two most recorded birds in our gardens and parks - have declined so much numerically that they are now on the IUCN Red List of Threatened Species. Hopefully, both populations will at least stabilize.

Friday 29th June: a cloudy morning with spots of rain, occasional glimmers of sun and a strong wind. The wind made it difficult to hear the birds and perhaps they weren't bothering to sing much anyway. It was also hard to see the small birds as all the trees are in full leaf. In short, we saw and/or heard only 13 species during a two hour survey and that's the lowest number recorded this year, down from 23 species in Jan, 22 in Feb, 16 in March and April and 14 in May. Crap weather may have something to do with it (wettest April-June quarter since 1910 etc.), but also the moulting season is beginning which means some birds will be keeping a low profile as they shed their feathers.


The highest number by far was a flock of 20+ Woodpigeons foraging on the East field. After that, 4 Carrion Crow, 4 Blackbirds, 4 House Sparrows, 3 Starlings, 3 Feral Pigeons, 2 Magpies, 2 Goldfinches, 2 Wrens and 1 each of Pied Wagtail, Robin, Great Tit and Chaffinch. The Pied Wagtail was hopping about the bowling green only a few feet away from two Glendale workers who were mowing the grass, though it eventually flew away. From previous observations, the green is becoming a regular haunt for this attractive bird which feeds mainly on insects including flies, midges and caterpillars.

No sign of the Great Spotted Woodpeckers (see recent posts), but we did see a fledgling Carrion Crow following its mum or dad around near the cricket pitch, sometimes opening its mouth in hope of food. It's plumage at this stage is mainly dark brown rather than the familiar all-black of the adult. A few of the smaller birds we saw did look rather disheveled (though not this Crow) which may be due to the strains of producing and feeding their needy broods. 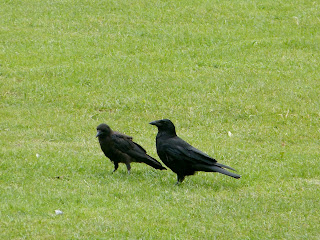 In the cherry tree just to the south of the newly opened cafe, we saw four blackbirds flitting around and pecking at the cherries. Easy to see the speckled breast of the female in the pic. below even if the camera is slightly out of focus. 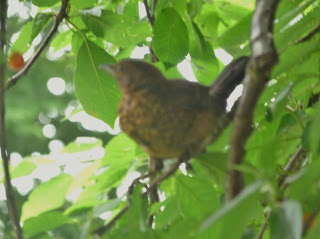 After that, we treated ourselves to a much-needed coffee!

Posted by Tom at 22:14 No comments: Links to this post