There was neither sight nor sound of any birds on 29 July when Sue, Judith and I met at the lower Vicars Hill entrance. This continued for a while as we walked along the Veda Road border, reflecting the fact that July and August are days of rest and moulting for many birds after their mating, breeding and chick-rearing labours during the first six months of the year.Then we heard the churr of a Blue Tit amongst the foliage and the cawing of a Crow which we came across later high in a tree. 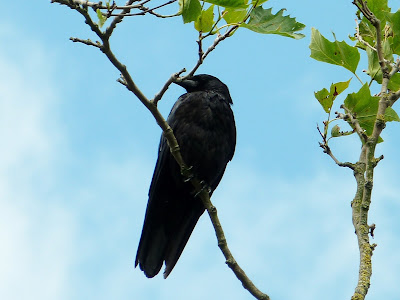 At the orchard and little wood, things perked up. A Blackcap sang intermittently and there were occasional song bursts from a Wren. On upper Eastern Road, we had a clear view of a Greenfinch and could hear the high melodic twitterings of Goldfinches without actually seeing them. Male and female Blackbirds were seen and a Robin issued its warning call - a clicking sound like a pre-digital clock being wound up - from deep within the undergrowth. Then things grew quiet again and we took a diversion through the south meadow where butterflies could be seen and crickets heard in the long grass.

Eventually we reached the shade garden next to the bowling green and found that last month's Long-tailed Tits were still there - six altogether, flitting around the conifers, as difficult to photograph as ever (see below!). There was no sign of any Sparrows in the Cliffview Hedge - and that was it. 13 species in total - our lowest count of the year. Hopefully, things can only get better - as someone once said, or sang. The birds are still there - just keeping their heads down. 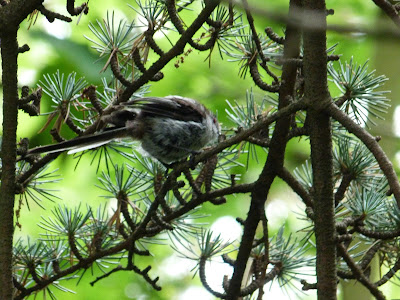