Sadly, this week sees the departure of Chris McGaw who has managed the Lewisham Rivers and People project since its inception two and a half years ago. In that time, Chris has led umpteen walks all over Lewisham and shown us many features of the natural world that we never knew existed in our urban surroundings. Hilly Fields has been on the itinerary several times including two dawn chorus walks when Chris drove in from his home in Kent for a 5.00 am start. He even managed to stop the rain for a couple of hours this year and provided the magic key that let us into Brockley and Ladywell cemeteries as part of the walk.

Chris is a birder with a particular skill in recognising birdsong, but he also has a very wide knowledge of nature in general and has identified for us many flowers, plants, trees and tree galls, insects, fish and other aquatic creatures. Always helpful, his enthusiasm for nature has been inspiring. In his new job at the Kench Hill Centre near Tenterden, Chris will be helping inner city school children learn more about the natural world. He will be very much missed in Lewisham.

Posted by Tom at 23:09 No comments: Links to this post

The upper half of Eastern Road and the adjoining wood/nature reserve could almost be designated an AONB (Area of Outstanding Natural Birdwatching) within Hilly Fields. Apart from the winter Gulls (and, come to think of it, the House Sparrow), almost every bird that frequents the park can be seen there at some time or other and it's particularly favoured by the smaller birds such as Tits, Finches, Blackcaps, Robins, Wrens and by Blackbirds. Obviously the number of trees is a big attraction, as is the cover provided by the sheer density of foliage, particularly the hawthorn scrub on the western side of the road. And at this time of year, the bright red haw berries provide a food source.

Eastern Road also contributes one of the few sources of water for birds on Hilly Fields. On this month's survey (24 August), we watched a small flock of adult and juvenile Goldfinches along with a couple of Greenfinches swoop down from the roadside trees to drink from puddles in the gutters and little potholes - a sight we've often noted before. In the wood, we heard a couple of Robins singing for the first time since late spring - a sure sign that they're emerging from the summer moult. Wrens were singing there too. And flitting among the trees on the eastern side of Eastern Road was our old friend the Great Spotted Woodpecker, not seen since early June. In this full zoom photo, you can just about make out its black, white and red colouring. Elsewhere in the park, we saw Great Tits, Blue Tits, Blackbirds, Magpies, Crows, Feral Pigeons, House Sparrows, Ring-necked Parakeets and Wood Pigeons. In addition, Sue intended to listen to her birdsong CDs to determine whether the "chink" (or was it "pink"?) we heard could have been a Chaffinch calling. This makes a reasonably wide range of species, albeit in small numbers apart from the "Woodies". Still no sign of any Starlings. Earlier in the month, I saw a pair of Mistle Thrushes in the Eastern Road hawthorns and a Jay in the poplars along the Stones Field boundary, so it's good to know they're still around.

Meanwhile, in other news, something is coming to fruition along Eastern Road - yes, it's also an Area of Outstanding Natural Blackberrying. If you haven't been along there with your bowl yet, now's the time. 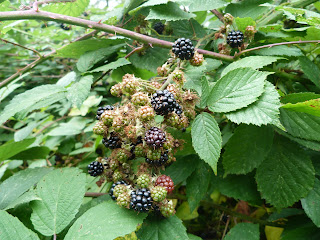