It rained. Not heavily but fairly persistently throughout our Big Birdwatch event on 26 January. Were we downhearted? No. After all, we're British and used to it, especially this winter. We set out our stall under the sheltering roof of the cafe, stiffened our upper lips and got on with it. And thankfully people came along, many bringing their children to experience that unique phenomenon known as 'the outdoors'. Lard and seed were moulded into fatballs and hung from nearby trees, bird badges were made and, as always, people either took a survey sheet and went round by themselves or came round on one of the guided tours. And by the end of the event, we'd seen 20 species, only one less than last year which considering the weather is a bloomin' miracle.

Two species tied for highest number present: the Starling and the Black-headed Gull at 50 each. When it comes to ranking them though, I'm going to put the Starling first because there were so many flitting through the trees around the playground (and some on the ground as well) that I'm sure 50 was an underestimate. Next came the Common Gull with 16 being the max count, then a wonderful flock of 12 Goldfinches outside the school which, at one point, rose up together from the ground with a spectacular 'whoosh!'. There were also a pair of Greenfinches with them which are always nice to see (their numbers have fallen in recent years) and we had some very clear views of a Great Spotted Woodpecker just outside the wood and 2 cute little Long-tailed Tits in the garden next to the bowling green. 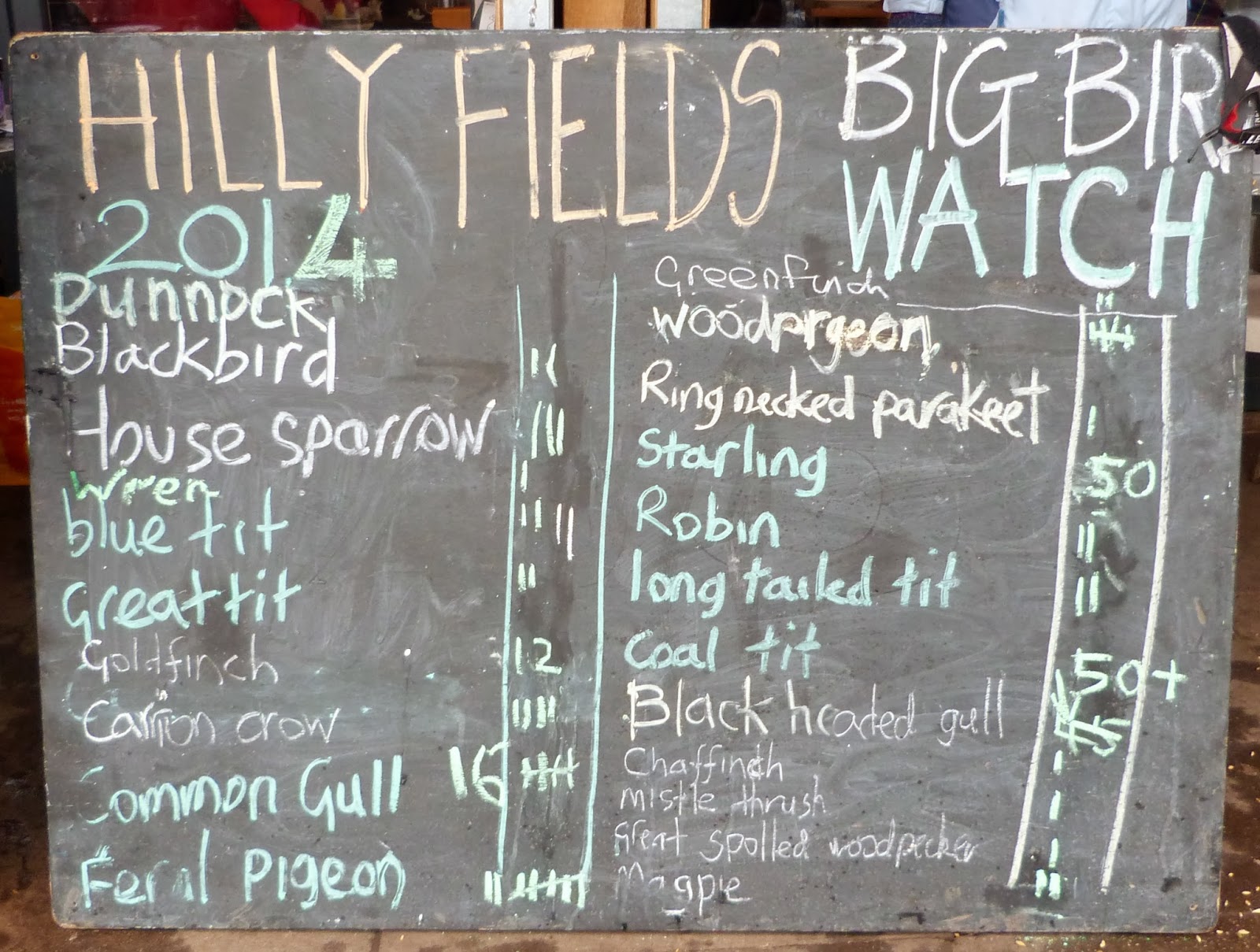 The gulls are a major presence in the park at the moment and we're still being asked how you tell Black-headed and Common apart. There are various distinguishing features but the simplest details to remember are as follows:
The Black-headed Gull has a white head in autumn and winter and a dark chocolate brown head in spring and summer when it's breeding. From a distance that can look black, which is how it got its name.

Thanks are due to Rachel from the Friends of Hilly Fields and Judith from Glendale who ran the stall, to my fellow bird champions Sue, Keith and Terry, to Rachel Hale for bringing the badge making kit, to Fred and Ruth from the cafe and to our ever helpful parkie, Lee. Our next bird event will be the famous Hilly Fields Dawn Chorus Walk (oh, stop groaning) on a date yet to be fixed in late March/ early April. See you all then! 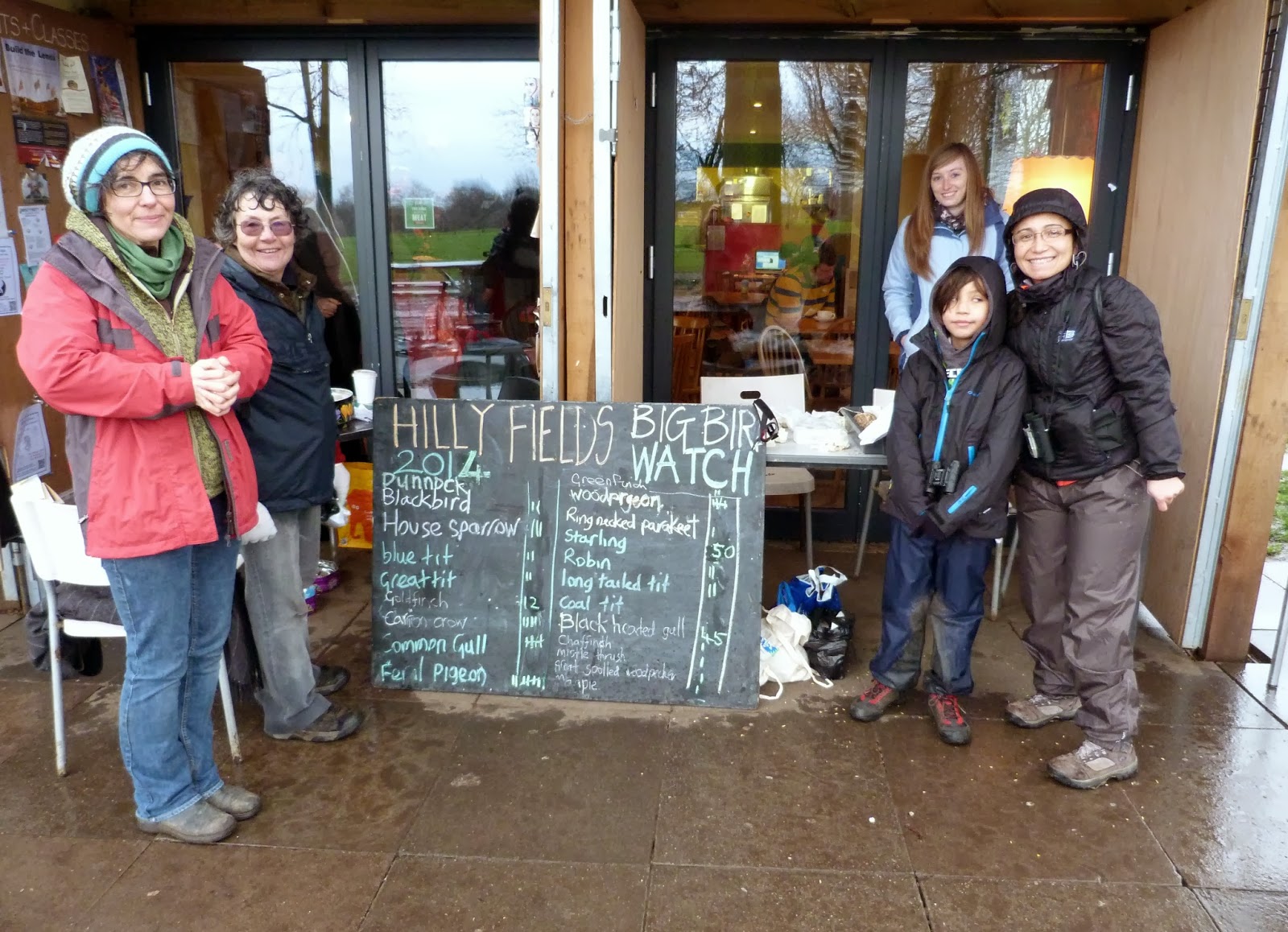 This is your final reminder. The Friends of Hilly Fields Big Birdwatch takes place next Sunday 26 January between 11.00-14.00 on - wait for it - Hilly Fields. This is the weekend of the RSPB Big Garden Birdwatch and we will submit the final results to the RSPB's national survey. Is Hilly Fields a big garden? Well at forty acres, it's big even if you have your own garden. And the RSPB says we can do it in parks (the big birdwatch, that is), so there.

What do you have to do? Well, turning up would be good. With binoculars would be even better but not essential. Our rendezvous desk (or gazebo depending on the weather) will be by the cafe. Take one of our bird id/count sheets and either: (i) go round by yourselves or (ii) go round on one of our guided walks. Remember the RSPB rules: (i) only count the maximum number of each species that you see at any one time (to avoid duplication); (ii) don't count birds that fly over without stopping - only birds within the park. If in any doubt about the rules, ask at the desk.


Children are welcome and and could try their skill at making bird feeders to hang from the trees. Adults can try the Bird Champion Quiz - ten moderately fiendish questions which are more about references to birds in folklore and popular culture than boring ornithological stuff. And of course, the cafe will be open to nourish your bodies and brains.

As regular readers of this blog will know, we do a bird count every month at Hilly Fields. The annual Big Birdwatch also acts as our monthly count for January, so you are helping us to monitor bird life and the health of the park as a habitat. For the last three years, we've counted 21 different species each time. Can we beat that this year? Come along and help on Sunday 26 January between 11.00-14.00.

That was your final reminder. Don't say you haven't been reminded. See you on Sunday!

Postscript: Here is an updated list of all birds seen or heard in the park since 2007 when the Bird Champion scheme began:

Through All Kinds of Weather

The wind was gathering force again as Sue and I met on 27 December for the last monthly survey of 2013. It rained for a while too though we found shelter in the wood where a brief outburst of song from a Wren briefly lifted our spirits. Then, just as we were cursing for not checking the weather forecast, out came the sun and brought a few more birds with it. Eventually, we ended up with a healthy total of 18 species. Blue and Great Tits were very active in the trees and quite vocal with Great Tits calling more frequently as if aware that a new year is on the way. Robins were singing around the park too though were not so easy to spot. Near the bothy, we saw a few Long-tailed Tits, very pretty birds but fast-moving and difficult to photograph. My effort below does at least show the length of the tail although the camera angle makes the tail seem as long as the body when in fact it's longer. When you see them in the trees, you notice how small their bodies are compared, say, to the Blue Tit. 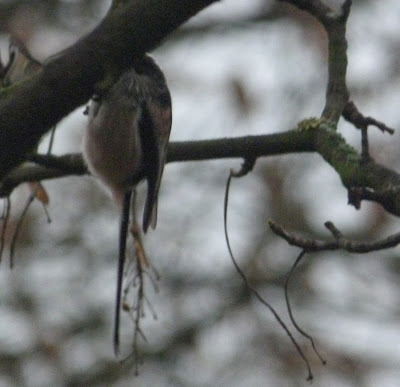 A large flock of gulls was spread across the cricket field with Black-headed Gulls (40) outnumbering Common Gulls (5) on this occasion. A Lesser Black-backed Gull was seen there too, though keeping its distance from the others. This was the second Lesser Black-backed sighting of 2013. Sue also glimpsed at separate times the male and female Great Spotted Woodpeckers. And the Starlings are back from wherever it is they go to in the summer - a flock of about 30 was moving noisily tree by tree from near the playground down to the north field. Sadly, the RSPB estimate that the Starling population has fallen by 66% since the mid-70s and it is now red-listed as a bird of conservation concern. 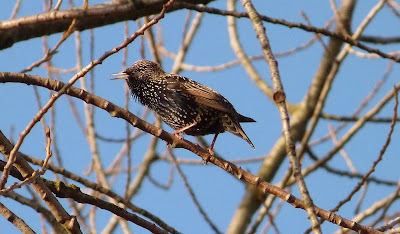 In their usual territory - the Cliffview garden hedges - we saw no less than 12 House Sparrows, slightly more than usual. This is another once common, now red-listed bird which still finds a home on Hilly Fields. Elsewhere in the park, we saw 12 Feral Pigeons, 4 each of Woodpigeon and Crow, three Blackbirds, a pair of Magpies and a single Chaffinch and Ring-necked Parakeet. And so it remains only for me to wish you a very Happy New Year and remind you of what will undoubtedly be the greatest birding event of 2014 if not of all time (weather permitting)... 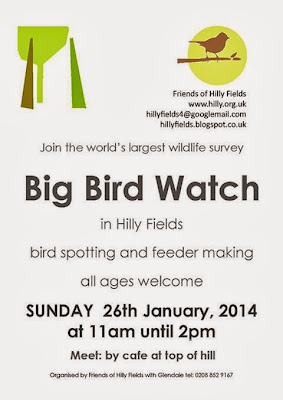 This is part of the RSPB Big Garden Birdwatch weekend. Bring binoculars if you can. We will provide survey sheets. Children are welcome and we will have material for bird feeder making if they are interested in that. You can also have a go at our Fun Bird Quiz which, without being too ornithological, will challenge your common knowledge of our feathered friends. See you there!