Redwings have been seen twice this week on Hilly Fields, twittering in the trees and feeding on the ground near the stone circle. I counted circa 40 birds on Monday afternoon and Rachel saw a similar number this morning. 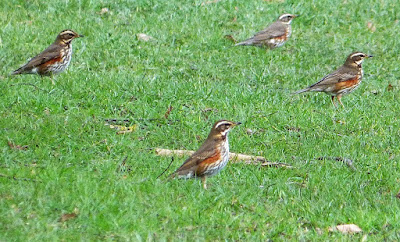 Redwings are members of the Thrush family, as are Blackbirds, Fieldfares and of course the Mistle Thrush and Song Thrush (and, further north, the Ring Ouzel). Redwings get their name from a red patch under the wing which can clearly be seen in my photos but isn't always visible. The stripes around the head are a more reliable ID feature, particularly the creamy white stripe over the eye. They have a similar spotted breast to other thrushes. Their twittering is a form of 'subsong' which the dictionary describes as 'an unstructured, often rambling vocalisation of low volume'. I couldn't have put it better myself. 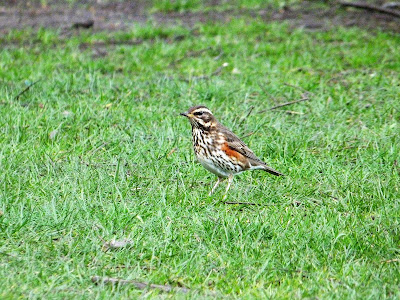 Most of the Redwings seen in Southern Britain are migrants from Scandinavia. They arrive in autumn and feed on fallen fruit and berries. They get through the winter mainly on a diet of earthworms and depart in early spring. It's unusual to see so many on the ground in Hilly Fields, but they would have been frustrated by last week's snow and are making up for it now. They'll also be 'feeding up' for the flight home. The 'subsong' is usually a sign that they're thinking of departure and also of courtship when they get back. It's lovely to see and hear them. Let's hope they return in similar numbers in the autumn.
Posted by Tom at 17:55