Our annual Big Birdwatch event on Hilly Fields will take place this year on Sunday 26 January from 10.30 - 12.30. As usual, this is timed to coincide with the RSBP Big Garden Birdwatch weekend. The Friends of Hilly Fields will have a stall outside the cafe with fun activities such as seed ball making for children and illustrated guide sheets to help you identify the birds you see in the park. Just remember the two golden rules: (i) only count the maximum number of each species that you see at any one time (to avoid duplication); (ii) don't count birds that fly over without stopping - only birds within the park. Return your findings to us and the Friends will collate the results on the Big Blackboard. If you don't want to attempt it on your own, come on the guided tour which will start at 11.00 approx. 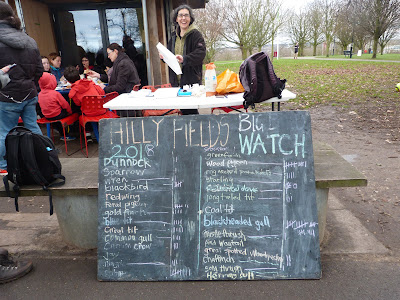 Our last three monthly surveys of 2019 have been encouraging with the count rising steadily from 17 species in October, 19 species in November, 24 species in December including both Song and Mistle Thrush, Great Spotted Woodpecker, Nuthatch, Coal Tit and Greenfinch. Last year, a strong north wind meant one of the lowest counts we've had for January, so let's hope for decent weather this time round.

We've had several reports of a Tawny Owl being heard in or near the park. I heard one 'hooting' (it's actually their song) a few nights ago from the direction of Hilly Fields and my house is about 300 yards away as the owl flies. So if you live in the vicinity, keep an ear open. If you're lucky enough to see one in the park, please let us know. Nb. the Tawny Owl is smaller than you might think, averaging about the same size as a Woodpigeon.