The Upside Down Bird

In the past, the Nuthatch has been an infrequent visitor to Hilly Fields, but since last September we've seen or heard them on our surveys every month. Now as recounted in the previous post we've discovered that a pair are nesting in the park, which means that new little Nuthatches should soon be on the way.

The Nuthatch is about the same size as a House Sparrow. It has a long pointed bill, blue-grey upperparts and buff underparts with chestnut flanks. It also has a long black stripe running through its eye to the back of its head. This and the pointed bill make it easy to identify. According to the RSPB, it is the only British bird which 'descends a tree trunk head first'. Why do Nuthatches go up and down tree trunks? To dig insects out of the bark, which is what the pointed bill is for. They also eat seeds which they store sometimes in cracks in the bark. And believe it or not, Nuthatches eat nuts which they wedge within cracks in the bark and crack open - again with that powerful bill.

Usually, Nuthatches nest in tree holes and have a well-known habit of plastering the rim of the hole  with mud to reduce its diameter, thus preventing larger birds (eg. Magpies) from stealing the chicks or nestlings. On Hilly Fields, however, they're using one of the newly-installed Schwegler nest boxes which have small predator-proof holes. 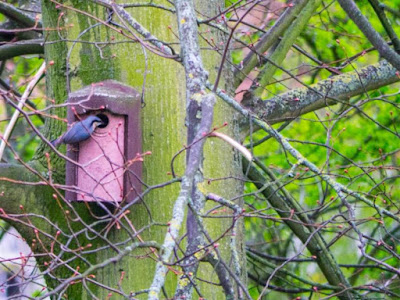 The most common call of the nuthatch is easy to remember: a single note rapidly repeated, rather like someone whistling melodiously for their dog. It can be heard from 19 seconds onward in the video below.

Finally, Nuthatches do visit garden bird feeders and can be quite assertive towards other birds while doing so. This picture shows one in Keith Ward's garden which backs onto Hilly Fields. It seems even on feeders they prefer the upside down approach! 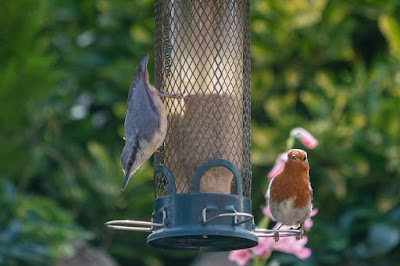